A primer on everything that has been revealed about NKU's financial situation to date. 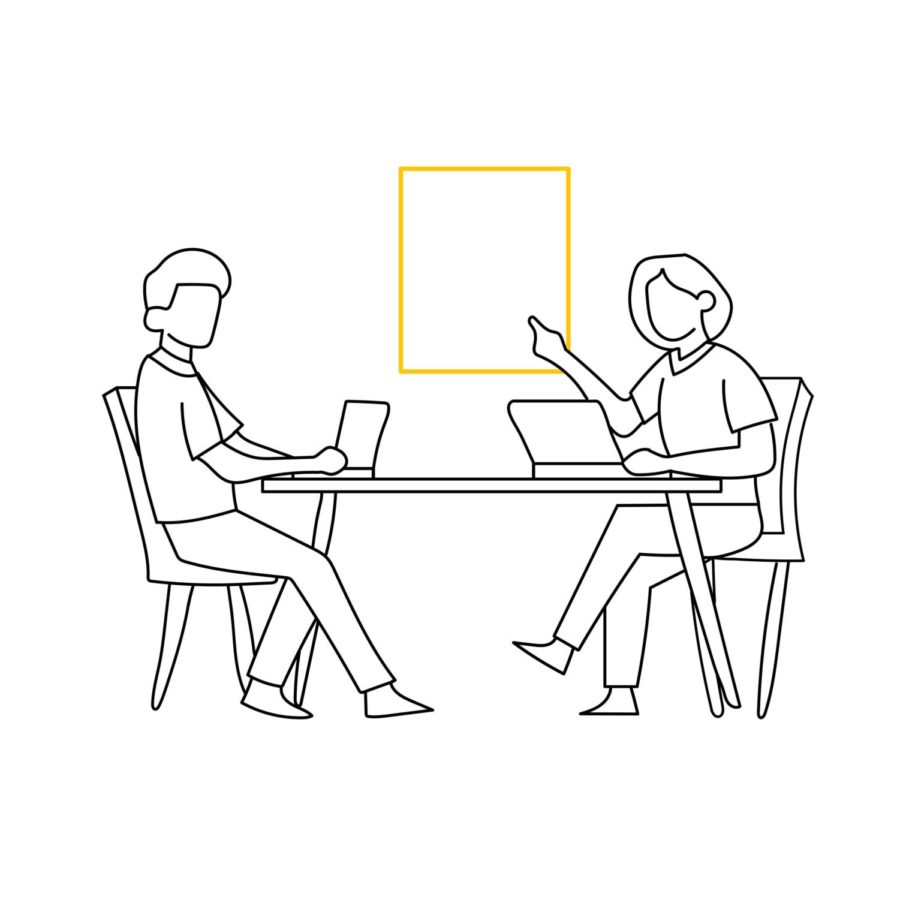 Northern Kentucky University announced an unexpected $18.7 million budget shortfall and the Reposition Plan to combat it at a budget and strategic meeting held Oct. 6. The news has rippled across the campus community, fueling a whirlwind of concern, anxiety, anger and rumors. Several aspects of the plan have also changed since. Here is everything that is known about the deficit and the administration’s plan so far.

The university’s annual budget published in June this year projected a $5 million net loss, the result of an anticipated $271,475,728 expense budget and $265,975,728 revenue budget. However, the administration started noticing additional budget shortfalls around July or August, according to Vice President for Finance & Administration and Chief Financial Officer Jeremy Alltop.

At the Board of Regents meeting held Nov. 9, Alltop updated the total net loss to be $23.7 million, caused by $290.2 million in expenses overwhelming $266.5 million in revenue.

The university attributes the $18.7 million deficit, constituting just under 7% of NKU’s overall budget, to a number of factors:

Traditional undergraduate enrollment at NKU has already been on a steady decline over the last five years. With the COVID-19 global pandemic disrupting in-person learning across the nation and around the globe, student priorities have further shifted to stackable credentials, online delivery and flexible formats. The university is thus facing competition not just from other institutions but also from online certificate and credential providers.

In an interview with The Northerner, Provost and Executive Vice President for Academic Affairs Matt Cecil stated that a higher number of juniors and seniors are stopping their education to enter a rebounding labor market, affecting tuition revenues in the process. NKU has also seen more non-degree-seeking students who enroll at the university for short terms to upskill and progress in their full-time jobs. Altogether, these demographic changes have contributed to $5 million of the $18.7 million deficit.

During the pandemic NKU made SAT/ACT tests optional for merit-based scholarships, resulting in more students qualifying for financial aid based solely on their high school GPA. Exceeding the planned budget, this large amount of institutional aid accounts for $8 million of the deficit.

College of Health & Human Services growth and other expenses

According to Jeremy Alltop, the College of Health & Human Services has grown considerably over the last four or five years, leading NKU to invest more heavily in the college in terms of faculty salaries and resources. This investment creates $2 million worth of unbudgeted expenditure, which along with $3.7 million in utility costs, maintenance costs and various program expenses accounts for $5.7 million of the deficit.

Losses and inaction from previous years

Alltop revealed to the Board of Regents that about $6.5 million was anticipated in salary, travel and operating savings in previous fiscal years, which did not materialize. In addition, budgetary losses were acknowledged in some routine reports that neither came to the board nor were communicated with other administrators. Nevertheless, an Oct. 4 audit of NKU saw a clean opinion. 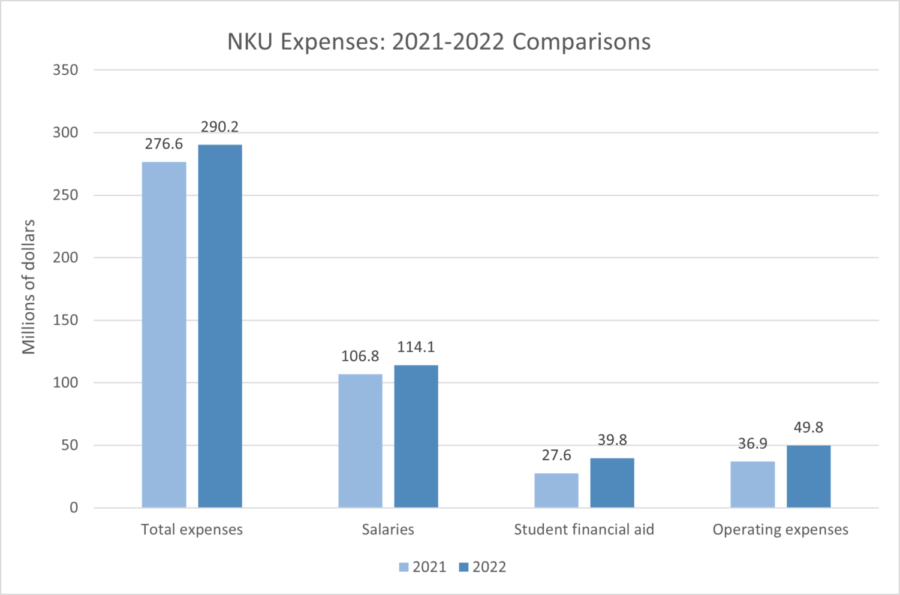 At the Oct. 6 budget and strategic update meeting, university officials announced a Reposition Plan that aims to reduce expenditure and increase revenue over a period of five fiscal years. Crucial to the plan is reducing instructional costs, which currently occupy $80 million of NKU’s total budget and which have grown at twice the rate of revenue, over three years.

University officials stated that they will be more careful about creating new tenure lines for future faculty and pause hiring for vacant positions. The administration emphasizes that tenured faculty and existing faculty who are already being considered for tenure will not be affected. The same protection does not extend to part-time or adjunct faculty, who will not be renewed for their positions at the end of their contracts with NKU.

Even then, the Board of Regents approved a proposal for the Faculty Voluntary Separation Program for 2022-2023. Full-time tenured and tenure track faculty will be eligible to leave NKU of their own accord on May 31, 2023 or Dec. 31, 2023, with a lump sum equalling 80% of their salary and $10,000 in health care spending as incentives. Approval will be evaluated based on the percentage of salary savings that their departure achieves.

University officials said they are currently working with deans—who in turn will inform department chairs, faculty, staff and students—to implement these changes across the colleges, and are willing to push the timeline for reaching reduction goals further down if needed. The impact will vary depending on the growth of each college, though Health & Human Services will be least affected by the cuts and will receive $1.7 million in salary and wages owing to its rapid growth.

NKU is looking to establish Academic Commons, a one-stop for all student support services—preferably located in the Steely Library—that might include some degree programs, by 2024. The administration will be seeking students for a task force to design the Commons and work groups will meet between Nov. 11 and Feb. 22 to produce plans for it.

Consolidation will also occur with the administrative support system—which the university considers inefficient, with too few administrative members supporting too many faculty and staff—as well as outreach efforts and units that interface with employers. NKU hopes that these merges will bring $2.4 million worth of savings.

At the Nov. 9 meeting, the Board of Regents approved a proposal to eliminate Informatics+ and redirect its resources into ENTERprise NKU, which facilitates partnerships between the university and the region’s workforce.

The process is taking place on a smaller level, too. According to Alltop, NKU is running an analysis of software packages used across campus to remove duplicated software that is performing the same functions.

Because financial aid over budget takes up a significant chunk of the deficit, the university plans to realign financial aid so as to reduce spending by $8 million.

Awards for the Founders Scholarship will decrease from $6,500 to $3,000, the Excellence Scholarship from $4,500 to $2,000 and the Commonwealth Scholarship from $2,000 to $1,000 after adjustments based on projected 2022-2023 tuition rates. The Achiever Scholarship will be eliminated. Similarly, the EDGE Award for non-Kentucky residents will be $8,256 for Ohio metro area students, $7,256 for students outside of Kentucky-Ohio-Indiana metro counties and $5,000 for international students.

University officials stress that these changes will not affect currently enrolled students and will apply to new students only. However, according to the ISSS, from January onward EDGE and merit-based scholarships will no longer renew for international students who have not completed their education within four years.

At a Student Government Association meeting on Oct. 31, President Ashish Vaidya assured students that any changes to tuition will be determined during the new budget cycle that starts in January, and that tuition increases at NKU have never exceeded 3% for the last seven years.

Vice President of Student Affairs Dr. Eddie Howard said that NKU will develop a financial literacy program to help students better understand the cost of attending college according to their majors, ensuring that they do not borrow too much money for items they do not need.

NKU outlined a number of reductions in several aspects at the Oct. 6 meeting, including $725,000 in operating expenses, $600,000 in personnel expenses, $550,000 in housing, $500,000 in parking services, $325,000 in outsourcing functions and $200,000 in advancement. Other potential saving opportunities lie in gasoline, space utilization, travel and operating expenses and energy efficiencies, Alltop said.

Actions implemented in August have already affected several filled and vacant staff positions in administrative support units, student health, Informatics+ and the Grant County Center, while also creating some new positions. As a result, NKU has managed to save $3.6 million in budgeted salary and reallocate $1.3 million to fill the revenue shortfall and pay utility bills.

The second half of the Reposition Plan concerns strategic investment in areas that have seen significant growth. In particular, NKU seeks to generate more revenue in the following departments:

These increases will complement $525,000 in operating reductions, $500,000 in usage of NKU Foundation account balances and $1 million in fundraising for financial aid.

The First-Year Student Success Hub inaugurated this year, which provides coordinated counseling, financial aid, career and recruitment services to freshmen, will be a key investment. NKU will also reorganize its Enrollment Degree Management system, recruit more admission staff and a new director of financial aid in an effort to maximize enrollment and tuition revenues.

According to Dr. Howard, the administration will prioritize marketing and build stronger corporate relationships with schools in eight “top feeder” Kentucky service counties near NKU to recruit more students from these areas. Provost Cecil said that NKU will continue to invest in international students and expand recruitment into new areas such as Brazil and Malaysia.

At the Oct. 6 meeting, 50 listening sessions were announced where the campus community could raise their questions and concerns regarding the Reposition Plan. These sessions had been attended by over 800 faculty, staff and students, according to President Ashish Vaidya.

Some attended the sessions with anger and frustration, Provost Cecil said, but others provided suggestions and potential solutions for NKU’s financial conundrum. After the faculty sessions have wrapped up, NKU will commence a series of student listening sessions to gauge student opinions on the changes and Academic Commons.

At the Nov. 9 Board of Regents meeting, Faculty Senate President John Farrar made an impassioned plea to protect part-time faculty, followed by Rebecca Hansen advocating for international students who will be barred from financial aid. Since then, the board has announced that Dr. Vaidya will conclude his term as president on Dec. 19, and he will depart from NKU for California afterward. VP for Finance & Administration and CFO Jeremy Alltop has recently been selected as a finalist for the vice president of finance position at Central Michigan University.

In view of the overall financial situation, the board approved the revised operating budget of $277.4 million for 2022-2023. The Reposition Plan will remain malleable according to feedback from the campus community and ongoing circumstances. Faculty can access the reposition website at https://inside.nku.edu/adminfinance/update.html and send in inquiries via reposition@nku.edu.

Correction: In the print version of this article, the award amounts for merit-based scholarships and EDGE Award were reported from figures presented at the Nov. 9 Board of Regents meeting. The figures in this version have been adjusted to align with those found on the Office of Student Financial Assistance’s website. The announcements of President Vaidya’s departure and CFO Alltop’s job search, made in the past week, have also been added.