Board of Regents meeting: Finances, repositioning, impacts on students and faculty

Administrators and speakers presented on enrollment, finances, adjustments and impacts before the board. 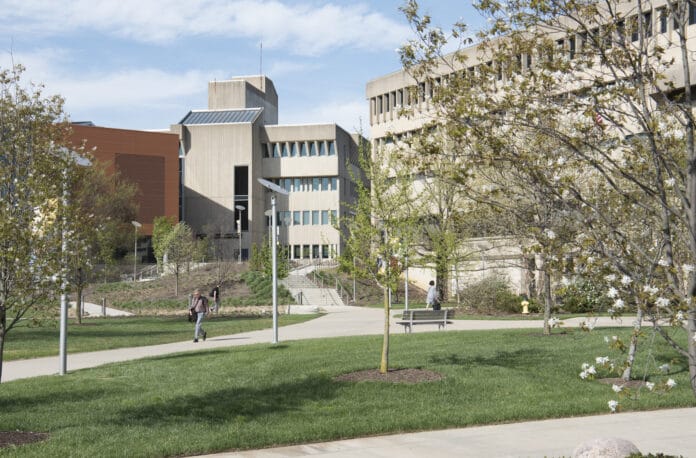 The Board of Regents met with the campus community in two sessions Wednesday, Oct. 9, where they discussed and approved several items regarding the Reposition Plan to tackle Northern Kentucky University’s budget deficit, including a revised budget for the semester, a voluntary faculty separation program and the first steps toward consolidation.

The Joint Finance and Policy Committee morning session opened with a presentation on Fall 2022 enrollment by Ryan Padgett, Assistant Vice President for Enrollment and Student Success.

To keep track of NKU’s enrollment statistics in real-time, Padgett and the IT team have created the Daily Enrollment Dashboard, which he hoped would be publicly available in a few days from the meeting.

Following a 10-minute break, Vice President for Finance & Administration and Chief Finance Officer Jeremy Alltop presented on NKU’s finances, which have been roiled by an unexpected budget deficit this semester.

NKU emerged from an Oct. 4 audit to determine whether its financial statement accurately described financial reality with an unqualified, or clean, opinion. The university’s gross tuition and fees revenue fell by 2.3% from $168.5 million in 2021 to $164.6 million this year, while expenses rose from $276.7 million to $290.2 million, representing a 4.9% change.

On the whole, Alltop updated the university’s revenue as $266.5 million and expenses as $290.2 million, creating a $23.7 million net loss. Aside from large increases in financial aid and declining on-campus enrollment—two factors that NKU has emphasized as primary contributors to the deficit—Alltop attributed the loss to $6.5 million in anticipated salary, travel and operating savings in previous years that never materialized, as well as staff departures and pension expenses.

In response to questions from the Board of Regents, Alltop revealed that budgetary losses in previous fiscal years were acknowledged in some routine reports that neither came to the board nor were communicated to other administrators, and that there might have been a more careless spending of funds than was authorized. He stated that he could not answer questions about previous years without speculating.

“We’re going to see 2023 losses that are greater than 2022 losses, to be completely honest. We have to make considerable changes over the next two and a half years,” Alltop said.

Alltop, along with Provost and Vice President for Academic Affairs Matt Cecil, requested modifications to the Reposition Plan based on new information. Specifically, the university will see a $4.5 million decrease in tuition revenue spread between resident and nonresident students, repurpose one-time spendings into student financial aid and add $1.7 million to salary and wages, mostly in the rapidly growing College of Health & Human Services.

Cecil and Alltop informed the board that some actions were already implemented in August, which have affected filled and vacant staff positions in administrative units, student health, the Copy Center, Informatics+ and Grant County Center, while also creating some new positions. As a result of August actions, NKU has saved $3.6 million in budgeted salary, $1.3 million of which has been reallocated to fill the revenue shortfall and pay utility bills.

Administrators also introduced the Faculty Voluntary Separation Program for fiscal years 2023-2024. Full-time tenured or tenure track faculty will be eligible to leave NKU on their own accord on May 31, 2023 or Dec. 31, 2023, with a lump sum of 80% of their salary and $10,000 in health care spending as incentives. The deadline to apply is Jan. 6, and approvals will be based on the percentage of salary savings that their departure achieves. Provost Cecil assured that no faculty will be negatively looked upon for volunteering.

Other significant reductions will come with financial aid realignment. Beginning in the spring semester, awards for the Founders Scholarship will decrease from $6,500 to $4,500 and the Excellence Scholarship from $4,500 to $3,500. The Presidential Scholarship will maintain full tuition coverage plus $6,000 stipend for on-campus housing, the Commonwealth Scholarship’s $2,000 awards will stay unchanged and the Achiever Scholarship will be eliminated.

New international students will no longer be eligible for these merit-based scholarships, Director of International Student and Scholar Services Rebecca Hansen said later in the meeting.

Additional plans for revenue enhancement were announced. The administration intends to generate $1.6 million from program growth, particularly in law, nursing, business and informatics; $700,000 from increased on-campus housing occupancy; $300,000 from increased parking rates, to be determined over 2023-2024; and $80,000 from a proposed $10/month Campus Recreation Center fee for faculty.

In discussing ways to boost housing occupancy, the board raised the possibility of decoupling mandatory meal plans from overall housing fees, thus inviting more students to stay on campus.

Board of Regents meeting

The afternoon session opened with a discussion item surrounding Kentucky House Bill 9, in which public and private postsecondary institutions are authorized to establish public charter schools in the state. Members of the Northern Kentucky Cooperative Educational Services (NKCES) delivered a speech to the Board of Regents advocating against board members authorizing a charter school.

“Public education is the only voice for all kids. It’s the only way that all kids can be educated, cared for and be given a fighting chance for a future where they can meet their goals,” said Misty Middleton, superintendent of Bellevue Independent School District Board of Education and incoming NKCES president. “Charter schools will not accept all students and they cannot meet the needs of all students like we do in public education.”

The second speaker John Farrar, associate professor in chemistry and biochemistry and Faculty Senate president, addressed a faculty perspective to the Reposition Plan.

“Many of us have dedicated our lives and our careers to this place, because faculty have a long-term commitment to the university. And frankly faculty are angry, disappointed and dismayed that we have reached this point,” Farrar said, stressing that the university must continue to engage with faculty as they weather through the times ahead.

In an impassioned plea to protect part-time and non-tenure track faculty, Farrar also emphasized the need for a full accounting and examination of the decisions that led to the budget shortfall.

“We cannot continue to build a quality university by exporting contingent faculty: part-time and non-tenure track. We’ve done that for far too long, and it’s time to change. Without protection, faculty aren’t willing and able to ask the difficult questions that must be asked, challenge the status quo and demand better,” Farrar said.

International students will receive the same amount of EDGE Award regardless of their high school GPA, which Hansen denounced as illogical and discriminatory.

“Correcting the discriminatory EDGE structure and finding ways to ensure that a 4.0 and a 2.5 are not given the same award simply because they have the wrong passport are both steps we can start taking now. But if we don’t address this overcorrection soon, it will be too late,” Hansen concluded to roaring applause.

Afterwards, President Ashish Vaidya expressed his gratitude for the entire NKU community for their resilience and the over 800 faculty, staff and students for participating in the Reposition Plan listening sessions.

Before entering executive session, the Board of Regents approved the revised 2022 operating budget of $277.4 million, the Faculty Voluntary Separation Program, the elimination of Informatics+ and redirection of its resources into ENTERprise NKU.