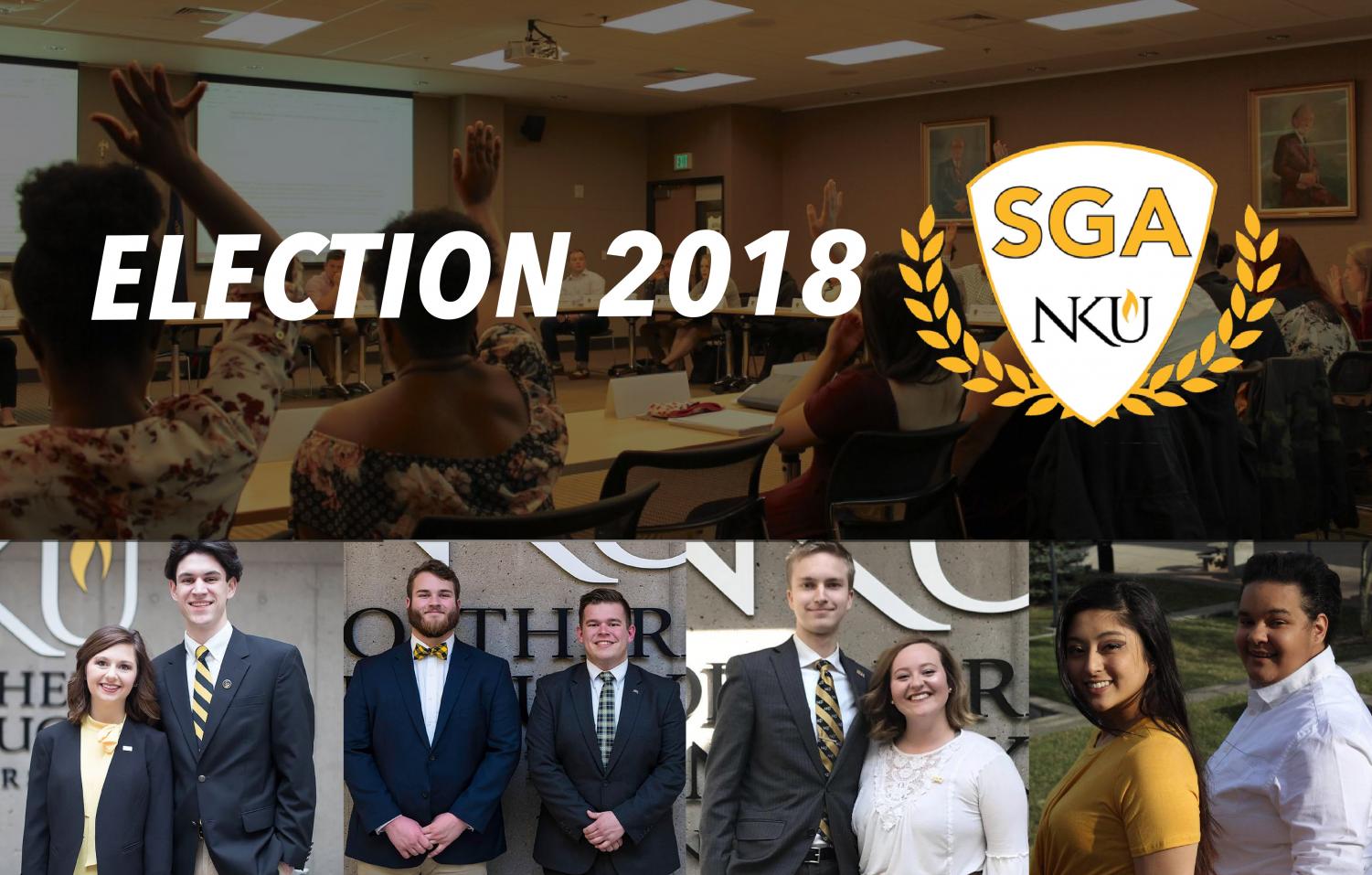 Student Government Association’s spring election season comes to a close this week; voting for president, vice president, senators and executive positions is March 28-29, and results will be announced outside of SGA’s office in the Student Union Friday at noon.

Get to know the four candidates vying for SGA’s top spot:

Edelen and Frey said their campaign is student-centric, including planning a dead week before finals and making printing more accessible; in the form of ‘Norse Rates’, they plan to establish more student discounts at local restaurants and businesses (including childcare services in the wake of Early Childhood Center’s planned closure).

For campus issues, Edelen wants to hold monthly student forums and events like NKUnity to address concerns that will “comfort students in times of need, and share the story that this university deserves to be known for.”

During The Northerner’s SGA debate on March 22, Edelen said she believes all students should have the same opportunity to learn.

Scholarships, she said, are one equalizer, and she would explore using profits from the campus bookstore to fund more international student scholarships.

About him: senior accounting major and sports business major. He is the current SGA chief of staff, former secretary of administration and has held leadership positions in Alpha Tau Omega fraternity and the Association of Campus Residents.

This is his second time throwing his hat in the ring: Gagné and presidential candidate Kaitlyn Schaefer took 35 percent of the vote last spring.

Gagné and Tiller said a more transparent student government is the “cornerstone” of their campaign. They believe in more communication between NKU colleges, awareness of FERPA protections for DACA students and want to create a mental health support and advocacy program called Students 4 Students.

Gagné and Tiller also want to explore bringing Chick-Fil-A, Panda Express, Larosa’s and other chains to the Student Union. Another initiative he’s pushing for is Tapingo, a food delivery service that would bring SU dining to buildings across campus.

At The Northerner’s SGA debate, the pair said they want to change sexual misconduct policy to include affirmative consent, moving from a “no means no” to “yes means yes” criterion.

Tiller, a mentor in the Norse Violence Prevention Center, said education on that policy would be key.

“We cannot only educate our generation, but also the generations before us,” Tiller said.

About her: junior organizational leadership major. She is president of Theta Phi Alpha fraternity and works in the Office of New Student Orientation & Parent Programs. She was also a presidential ambassador and head orientation leader.

Her running mate: Derek Holden, junior criminal justice major. He’s president of Tau Kappa Epsilon fraternity, marketing chair of Student Alumni Council and works in the Office of Student Engagement. He was also the man behind the mask for Victor E. Viking.

“A voice and face for students”

Marcum and Holden said they are running a “no frills” campaign to be a voice for students. Neither of them have been involved in SGA before running for president and VP.

“We are normal, everyday students, and want to bring that into SGA,” Marcum said.

Marcum and Holden said they will work on revising tailgate policies to include a student rep on the committee. They also want to extend meal swipe times to accommodate students with early and late class times and expand pedestrian walkways.

During The Northerner’s SGA debate, Holden said his priority is getting information to the students on how to advocate against rising budget challenges.

Holden said he would make sure students are “well-informed and well-aware about what we do at these rallies in Frankfort.”

About her: junior communications and philosophy major. She is the current chair of SGA’s student rights committee, public relations for Nu Upsilon Black Women’s Honorary, a mentor for NKU’s Latino Mentor Program (LAMP) and a member of the League of United Latin American Citizens’ NKU chapter (LULAC).

Her running mate: Alex Voland, junior public relations major. She served in the Army for four years, is an SGA senator, a member of Phi Mu Rho Nu sorority, an orientation ambassador and works as PR chair for Norse V.E.T.S.

“Help every student on campus, with resilience and honesty”

Sologuren said she is an advocate for NKU DACA students, and her SGA resolution for DACA solidarity passed last October. Sologuren and Voland also advocate for saving the Early Childhood Center, which interim president Gerard St. Amand announced would close in June.

Voland, who uses the ECC for her son, said an “Early Childhood Club” could support the children of parents attending college in the ECC’s absence.

“Even if I have to be the one heading it, there will be an opportunity [for childcare].”

Elections for student body president, vice president and other positions are March 28 and 29. Students can vote online on OrgSync. Results will be announced outside the SGA offices in the Student Union Friday at noon.