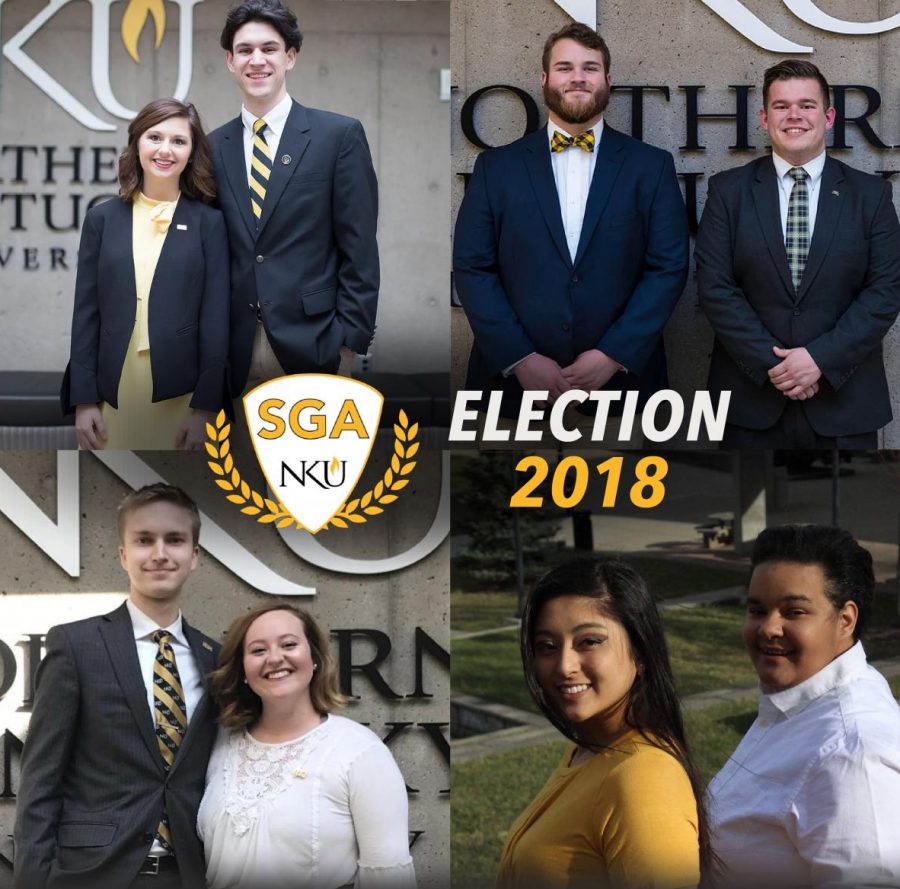 All four Student Government Association presidential candidates and their running mates worked to turn the upcoming student body vote in their favor. In front of a crowd of about 35, students gathered for the Thursday night debate on topics ranging from statewide and university budget challenges, making the campus better for under-represented minorities and handling issues of sexual misconduct.

The event was moderated by The Northerner’s own Editor-in-Chief Mackenzie Manley and News Editor Sam Rosenstiel; the debate was also live-streamed on Facebook.

The night began with a question that asked how each platform planned to make SGA more accessible to non-traditional and commuter students.

Candidates Hannah Edelen and Matt Frey said they will continue to support communication between commuters (Frey is a one himself) and non-traditional students in relation to the rest of NKU.

“It starts the minute you step onto campus,” Edelen said. “Whether it be your University 101 class or your three-day orientation.”

Taylor Gagne and Caleb Tiller also said they believe there need to be better initiatives in place to reach out to students through SGA in order to bridge the communication gap between the two groups.

Jachelle Sologuren and running mate Alex Voland said it was important to make the NKU community “stay a community” by ensuring that the programs currently in place are there for future students.

As pension costs become a more and more prevalent issue, each candidate weighed in how they feel they would educate students on how budget challenges would directly impact them, and possibly their departments, as well as advocate against pension cuts.

RELATED: What you need to know about NKU budget situation

Derek Holden, speaking alone (his running presidential mate, Samantha Marcum, had work conflicts) said their platform will continue to educate students on how the cuts might impact them. He added that the pair would make sure students are “well-informed and well-aware about what we do at these rallies in Frankfort.”

Holden was referencing to the Rally for Higher Education, which NKU students attend each year in Frankfort. He wants to push this information to students.

RELATED: SGA rallies in the face of cuts to schools

Sologuren said that she will continue to directly ask students if they know how the budget cuts will affect them.

“I feel that, as an SGA representative, we do need to reach out to more,” she said. “We need to be those people asking questions we need to be talking to everybody personally. And it starts with information.”

Edelen and Frey believe that the discussion first starts with advocacy. They have plans set for a ‘Norse Advocate Group,’ which would act as a liaison with SGA’s governmental affairs director.

In regard to the Early Childcare Center, which will close on June 1 following an announcement earlier this month, Frey said that “Our ECC supplies child care to 50 children–which is amazing for our non-traditional students–which is why after five years NKU has been able to gain so much ground, but unfortunately we had to make cuts due to how these pension cuts are being handled.”

Edelen and Frey also pitched ideas to create Norse Rates, alongside Interim President Gerard St. Amand or discounts for Norse students, in  places on and around campus in terms of childcare.

Alex Voland: “We can still fight as well as be empathic for the people it’s actually affecting.” Voland utilizes the ECC for her son. #NKUSGA1819

Voland weighed in as a user of the ECC saying that the center is very important to both herself and her son, and that the closure affected her personally, saying that “Even if I have to be the one heading it, there will be an opportunity [for child care].”

When pressed about how the candidates would handle issues of sexual misconduct, Gagne and Tiller believe that the best initiative begins with changing the sexual harassment and assault policies to a policy that gives a defined line of consent.

“One of our main pillars is to transform all of our sexual assault and harassment policies on campus to a ‘Yes Means Yes’ for affirmative consent mentality,” Gagne said.

Tiller, a mentor in Norse Violence Prevention Center, adds that they want to educate the faculty on this policy and keeping them just as educated as NKU does the students.

“We can not only educate our generation, but also the generations before us,” Tiller said.

Edelen said that “As a sexual assault survivor, I know what it’s like to be silenced and I will never silence a student.” Edelen and Frey added that, if elected, they will adopt the Yes Means Yes policy.

Sologuren and Voland say they will make more resources and work to create an environment that students feel safe to talk about situations and not only feel safe but are safe.

“We are the third safest campus why not number one? And that’s what we want to work towards: making us number one [by] working with the Norse Violence Prevention Center, doing campus walks as vice president and president, fixing light fixtures, making sure students– male and female–feel safe walking to their car or dorm,” Voland said. “Taking these steps to ensure that everyone is safe not just feels safe.”

Holden says that he and Marcum will work closely with NVPC to also teach students about the signs of sexual harassment and assault and how stop it from growing on NKU’s campus.

When asked about how they would help underrepresented minorities on campus, both Sologuren and Voland had positive things to say about their experiences in the LAMP (Latino program and services); both support the NKU R.O.C.K.S program. Sologuren continued to say that her and Voland have experience as minorities themselves.

Gagne said he would continue to fight for programs like LAMP and R.O.C.K.S, but that they also want to better include programs for the international students on campus.

“We want to also increase funding for an organization called the ‘Globally Minded Student Organization.’ [The organization] partners international students with domestic students to help them get more acclimated to college and universities,” citing their ties to Greek life and other organizations as a way to promote this.

Holden said their platform would be an advocate for maintaining those retention rates. They would reach out to minority communities in order to educated on what needs to be done.

Edelen and Frey both see the international population as an integral part of the university. Edelen added that she would see if some of the  profits from the bookstore could go toward international students’ financial aid and scholarships, saying that “Scholarships are more than just numbers; they’re relief.”

Later, per an audience question, each candidate expanded on their experience working with minority communities at NKU prior to the election campaign.

Holden cited his job in student engagement as a his doorway to interacting with the various communities, where he would see what they needed. As president and member of Tau Kappa Epsilon fraternity, he also drew from experience there, where their involvement with minority groups expanded.

Sologuren helped organize the first NKUnity event and continues to advocate for its continuation in the future. Currently, she serves as the public relations chair for Nu Upsilon Black Woman’s Honorary.

Edelen also continues to advocate for NKUnity, citing her work and dedication to making sure the event happened again. She has worked with organizations like NKU R.O.C.K.S, Kappa Alpha Psi Fraternity, Inc.,  Alpha Phi Alpha Fraternity Inc. and the International Students Union.

Gagne said that though he has not had much minority experience, he wants to learn. Tiller, coming from a predominately white town, said he came to NKU because of its diversity. He says he’s been a long advocate for the Black Lives Matter movement and educated himself on racial issues with Professor Joan Ferrante on the documentary Mourning the Creation of Racial Categories.

Gagne and Tiller also realize that, as the only pairing without a minority or female perspective, as leaders they would work to fill their cabinets with students from several backgrounds and perspectives.

Watch The Northerner’s livestream of the 2018 SGA presidential debate below.