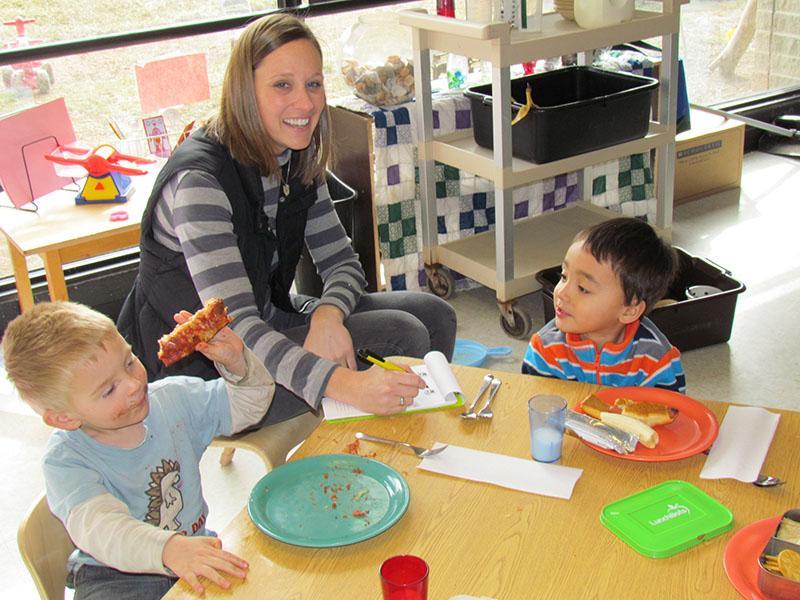 In this file photo, Audrey Wilson works with some of the students at the Early Childhood Center.

In light of financial challenges, interim president Gerard St. Amand announced on Friday that the Early Childhood Center will close its doors by June 1, 2018, citing in a letter to the student body that it has “been operating at a significant annual deficit for more than five years.”

The task force found that the ECC’s expenses were projected to rise steadily and that the current staffing model would not be financially sustainable. “In today’s fiscal environment, the University is no longer able to continue this significant subsidy,” Amand wrote.

Despite the task force’s predictions, Amand said that they continued to explore options to make the center more financially feasible for the university.

“In 2017, the university began exploring options for an outside provider to operate the Center or provide similar services,” the email reads. “Unfortunately, we are disappointed to tell you that the only provider who expressed interest and responded to our request for proposals is unable to provide these services on campus.”

Though the closing was just announced, a group has formed on campus to “Save the ECC.”  Hosted by the Revolutionary Student Union, their goal is to form a coalition in efforts to save the center. An event is in the work, but the date is TBA.

“The Early Childhood center helps student parents get their degrees and provides jobs to student workers and other staff members,” the group’s Facebook page reads. “We want to form a coalition of student organizations to get behind the effort of saving the ECC.”

About 50 children are currently enrolled in the center (located on the first floor of the Math, Education and Psychology building), which provides childcare and education to young children of the NKU faculty and students. Those who utilize the service pay tuition weekly.

“We understand that this change may cause a disruption in the lives of the parents and the children who have relied on the center for their child care needs,” Amand said.  “Knowing this, we want to provide everyone with as much notice as possible to find a new childcare solution.”

He went on to say that the university is “committed to assisting these families” that will be affected by the closing, and will help them locate another “affordable, safe, quality” childcare option in the area.

“We are exploring options to secure discounts at local daycares and will share any updates with you as we receive them,” the letter read. “We will also be working closely with the NKU Office of Parents Attending College to identify ways in which to assist our student parents.”

He closed by noting the supporters of the center throughout its time serving NKU students, faculty, staff and community members.

“I also recognize and appreciate the dedication of the ECC staff and their tireless efforts to control costs and explore alternative strategies and ideas to help make the Center sustainable,” Amand said. “We will work closely with all staff members to help mitigate the adverse consequences for them resulting from the closure of the Center.

This is an ongoing story. Check back at the northerner.com for updates.