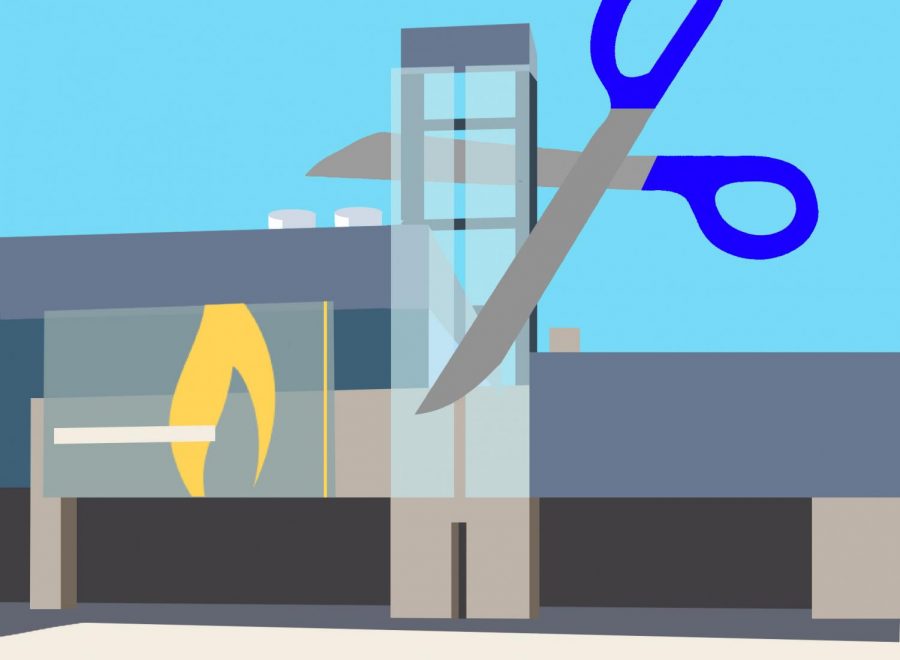 Based on cuts proposed by Kentucky Gov. Matt Bevin, NKU could lose over $3 million in state appropriations, including all funds for the Kentucky Center for Mathematics.

In addition, NKU would have to pay 67 percent of its appropriation funds back to the state for the Kentucky Employee Retirement System (KERS).

Here are five things you need to know about the university’s budget situation:

Tuition could rise, but scholarships and aid are already up.

NKU Chief Financial Officer Mike Hales said the university would consider increasing tuition between 2 and 5 percent. For example, in-state tuition could rise between $90 and $230 per semester.

Such an increase would be consistent with tuition hikes of the past: the Board of Regents raised tuition by 4 percent last year.

Tuition cannot be raised too much, however. The Kentucky Council on Postsecondary Education sets caps on each university for the tuition charged. Hales said this year’s cap will be decided in April.

A tuition recommendation will go to the Board of Regents at its May 2 meeting.

Hales said the university has seen “dramatic” increases in scholarships in line with national trends.

“We’re expecting next year that we will see scholarship increases,” Hales said.

Housing, parking and dining rates will go up.

UPDATED 3/14 3:10 p.m.: The Board of Regents approved parking, housing and meal plan fee increases at their Wednesday meeting.

Fee increases for passes will cover construction and restoration of lots for the next three to five years, according to Board materials.

The Board raised housing and parking rates by 3 percent in 2016.

NKU housing options are currently among the cheapest in the state. NKU’s lowest cost option, a double-traditional room, costs about $100 less than a double room at Western Kentucky University, its closest competitor.

Meal plan costs increase by between $50 and $55, a nearly 4 percent increase across-the-board.

See how your parking pass, housing and meal plan is affected here.

It’s unclear what could happen to staff and departments.

But, it is certain that NKU will lose $516,200 as a result of a mid-year cut to the university’s state appropriation. That cut will be factored into each university division as follows:

It will be up to each division how to allot those cuts, and it is not yet certain what departments or positions will be consolidated.

“When we’re talking these kind of numbers, really everything has to be on the table,” Hales said.

Staff should curtail expenses, postpone minor renovations and furniture purchases and use carry-forward funding as much as possible, Interim President Gerard St. Amand wrote in an email to faculty.

The university’s energy costs could also rise by $760,000 while Duke Energy seeks a 15 percent rate hike in northern Kentucky.

“Although we have intervened with the Public Service Commission to protect our interests in Duke’s rate increase request, there will likely be an increase at some level,” St. Amand wrote.

Hales said NKU decided not to use its $2 million contingency fund to offset cuts because of “uncertainty” that the money would be needed to supplement coming cuts.

“We felt like it was more prudent to go ahead and take those cuts and hold onto that reserve so at the end of this year we’ll have a little bit of a buffer to start the year,” Hales said.

NKU is on the hook for a $31 million pension payment without a reform bill.

The Kentucky Senate introduced a pension bill on Feb. 20, a bill that St. Amand said would not reduce NKU’s $31 million payment.

“If that’s the reform, then that $13 million increase no matter how we re-calculate our formulas, it’s going to have to be somewhere in that ballpark,” St. Amand said.

St. Amand, who has lobbied in Frankfort for pension relief over the last few weeks, said lawmakers know NKU is uniquely affected by a gap in funding and rising pension costs.

“At the same time that they’re trying to close the equity gap, they’re seeing that the pension cost increase is actually going to exacerbate that equity gap,” St. Amand said.

Kentucky Senator Joe Bowen said an “updated” version of the introduced bill will be brought to the Senate soon. The vote was delayed last week.

“We need to keep the pressure on our legislature to keep focusing in on equity funding pension relief from these increasing costs and pension reform, namely reform that actually makes a difference,” St. Amand said.

Without state money, the KY Center for Mathematics could close.

The governor’s proposed budget includes no funding for the Kentucky Center for Mathematics.

The KCM hosts math education research programming for students and teachers in NKU’s Campbell Hall from kindergarten to college.

Executive director of the KCM Dr. Daniel McGee said the department would most likely close if the final budget does not include program funding.

“Should the KCM not be funded, we will certainly explore options with education stakeholders to find a way for the KCM to continue to serve the children of Kentucky on a much reduced scale,” McGee said in an email.

McGee said that legislators have been receptive to their message but won’t know for sure what will happen next.