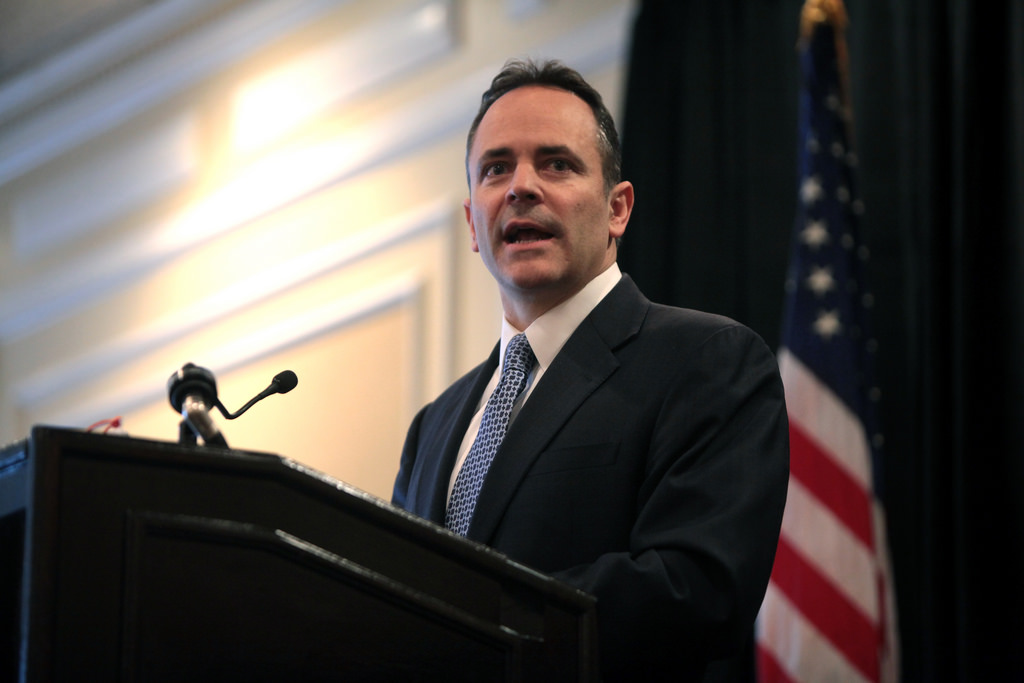 Gov. Matt Bevin gave his State of the Commonwealth and budget address in Frankfort on Tuesday night. (Photo by Gage Skidmore)

Gov. Matt Bevin gave his State of the Commonwealth and budget address in Frankfort on Tuesday night.

Gov. Matt Bevin proposed a 7.7 percent funding cut for Northern Kentucky University in his state of the Commonwealth address on Jan. 16.

For NKU, whose state appropriation for fiscal year 2018 was $51.6 million, that cut represents $3.9 million in lost funding.

The budget also offers no funds to the Kentucky Center for Mathematics, an NKU math education research program located in Campbell Hall.

Here are the 70 programs Bevin is proposing to cut.

The $516,000 cut interim pres. Gerard St. Amand announced on Jan. 10 will also occur before the end of the fiscal year. This adds up to a 1 percent reduction for all state university budgets.

In total, state funding for postsecondary education would drop by $63.2 million.

“The real budget focus is getting our financial house in order,” Bevin said during his speech in Frankfort.

Bevin’s proposal must be considered and approved by the Kentucky General Assembly, which is in legislative session until April 13.

Kentucky State Sen. Wil Schroder (R-Wilder) said the House and Senate will review and draft their own version of the budget, a process he believes might go to the end of the session.

“There are 138 legislators so it’s hard to predict how the final budget bill will look but I do expect substantial changes,” Schroder said in an email.

Adding the proposed $3.9 million cut to a projected $31 million pension contribution means 67 percent of NKU’s state funding goes back to Frankfort in 2019.

KRS includes the Kentucky Employees Retirement System (KERS). Even if KRS, and in turn KERS, are fully funded under the final budget, NKU’s $31 million payment will not drop.

Without “significant” pension reform before July 1, NKU and other affected universities will have to match 84 percent of pensioned employees’ salary dollars, according to NKU Asst. Vice Pres. of Corporate, Government and Foundation Engagement Adam Caswell.

Math center one of 70 programs cut

The governor’s budget allots no state funding for the Kentucky Center for Mathematics, which has offered math education programs and resources to school districts across the state since opening in 2006.

In response to the proposed cut, the KCM released a statement calling state funding a “small investment that pays huge dividends” for Kentucky students.

“We at the KCM believe that it is vital that neither the institutional knowledge (that has taken over 10 years to develop) nor the infrastructure that includes highly trained and experienced professionals should be lost to Kentucky. Starting from scratch on this work will set the state back over a decade,” the statement said.