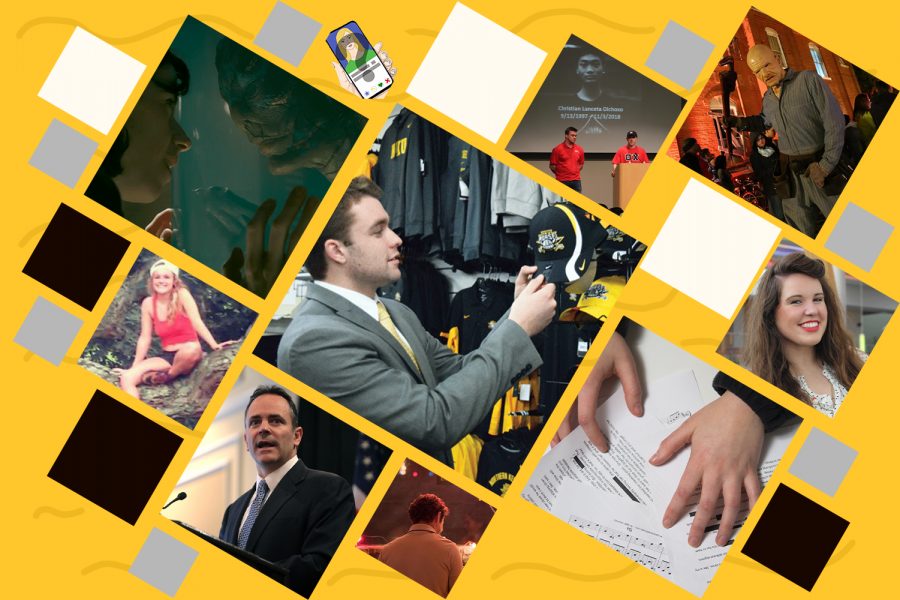 Between 2010 to 2019, The Northerner amassed 1.1 million page views on our website alone. In this decade, NKU has gone through three university presidents, built and renovated new buildings, transitioned to Division I athletics and added a new college.

The Northerner wanted to spotlight 10 of the top 25 stories that were the most-viewed this decade. Some tell fun stories of never being kissed at 22-years-old or twerking for Juicy J. Others tell of significant moments that brought the campus together, like student vigils and sexual assault reporting.

Thank you for supporting us, and we hope you stay tuned for 2020.

In 2016, NKU switched logos to reflect the shift to Division I athletics—but Norse Nation didn’t agree with the change. Student petitions to revert the logo back to the old logo reached almost 500 signatures in 48 hours.

Athletics had 17 different logos in place for the Norse, so the change was made in hope to create consistent branding. Colors switched from gray to gold and a four-color logo to a three-color logo.

The change caused controversy on campus; one student said it was ‘really ugly,’ while others looked at the cost effectiveness for solace.

Student: ‘I didn’t want there to be a girl after me

In 2018, former choral director Dr. Randy Pennington resigned from his position at NKU after a university investigation found he had violated the sexual assault policy. In the follow-up, Manley and Rosenstiel spoke with Natalie Brady and used Title IX documents to tell the other survivors stories about their experiences with Pennington. The story details exchanges, altercations and text messages that Brady and the other survivors received.

Manley said they spent hours combing through documents and reaching out to sources. She said she knew the story was going to be difficult to navigate.

“Mentally and emotionally, covering the topic of sexual harassment is really heavy. It’s a sensitive — and stigmatized — topic to write on and was the biggest weight of all,” Manley said.

The story also went forward to a finalist for best news story at the state and national level for student journalism.

A tale of ‘never been kissed’

Chanell Karr celebrated her 2014 Valentine’s Day by bearing all about never being kissed. The 22-year-old wrote how she had ‘never had a boyfriend, never been on a date and have yet to legitimately hold hands with a boy.’

Karr said that, at the time, she and her friends joked the 1999 Drew Barrymore movie “Never Been Kissed” was the story of her life.

Now 27, Karr said although she may disappoint some readers, she has yet to be kissed. However, she noted that with time comes self-love.

At the beginning of 2018, Governor Matt Bevin proposed a 7.7 percent funding cut from NKU which equaled out to $3.9 million of funding. Bevin went even further to recommend that NKU receive 47.1 million for the 2019 fiscal year, down from the original funding of $51.6 million funding.

This announcement led to several follow-up stories and updates about the Kentucky pension crisis through the end of Bevin’s term. It also bled its way into several SGA elections as an initiative to ‘rally for higher education’ in Frankfort.

After the death of student Christian “Jet Li” Dichoso, students, faculty and community members gathered to honor him through an open mic remembrance. The night filled the Student Union Ballroom and brought the campus together during a time of loss.

Dichoso’s family, friends, mentors and co-workers all spoke about how Dichoso had touched their life at some point or another.

“He was loved and he’ll forever be loved,” Nicole Millward said about Dichoso.

The vigil also commemorated the beginning of the Christian “Jet Li” Dichoso scholarship. One year later, Theta Chi—Dichoso’s fraternity—held a gala raising funds for the scholarship and reminiscing on his legacy.

Zac Efron spent a snowy Saturday filming the movie “Extremely Wicked, Shockingly Vile, and Evil” on campus and students went a-flutter. Efron was spotted in Nunn Hall, Steely Library and the Duchess lot—Lot I if you don’t know—and hunted by several students all throughout campus.

Students gathered in their cars to enjoy a brief glimpse into what it takes to film a Netflix Original Movie and for their childhood celeb’s turn as the infamous Ted Bundy.

If you want a first-hand experience into what it takes to find a killer, read “EDITORIAL: One year after Zac Efron came to campus” to see how one of our editors spent his day searching for Efron.

Dent Schoolhouse, the most haunted schoolhouse in Ohio, has some pretty deep and wicked history. A quick look at the number of students that disappeared in 1942-1952 tells it all. In this brief telling of the 2010 season of “Detention Hall,” you learn what to expect when going into the building.

“Legend has it that the school is still home to the souls of the murdered children wandering aimlessly through the halls, and the basement is the dwelling place to the deranged Charlie,” Bischoff writes.

Although the haunted house is closed for the year, you can expect them to open again in September. Prices and season theme have yet to be announced, but after their 2019 season expanded to the December months, you might be able to catch a holly jolly horror show.

Love in the digital age: the top 5 dating apps for college-aged students

In 2014, the dating app world had begun to boom among college students, and The Northerner wanted to give students a hand in how to navigate online dating.

The list gives quick fast facts about the then top apps for finding a partner, naming OkCupid and Tinder as some of the best. But if you’re looking for a new pool to dive into, it also gives the upsides to DateMySchool, Badoo and Let’s Date.

This story has continued to be a running joke here at The Northerner. This story, published over 750 days ago, often remains in the top read story charts week-after-week.

Jude Noel’s descriptive review gives his positive opinion of the 2017 sci-fi film. Two years after the release, Noel said that he is still a pretty big fan of the movie, and was shocked that it won the Oscar for Best Picture in 2018.

“I really respect Guillermo del Toro’s unpretentious combination of high art and fantasy, and The Shape of Water is my favorite work of his that I’ve seen,” Noel said.

The story that twerked it’s way to the most buzz during the decade was the twerking scholarship contest held by Juicy J. Morgan Bruin, then a freshman, participated in the contest to see how far she could twerk for a $50,000 scholarship. She finished fourth out of the top ten at the time of reporting.

Bruin got involved because of an ex-boyfriend who told her she could never attempt or even win a contest like this.

“I want to win this scholarship to join the Peace Corps and stuff, not just to win it to say I can twerk better than other people,” she said. “I’m doing it to move up in the world, to show people you don’t have to be a certain type of person to do certain things.”

However, Bruin did not win the twerking scholarship. In 2019, we were unable to find Bruin to comment.