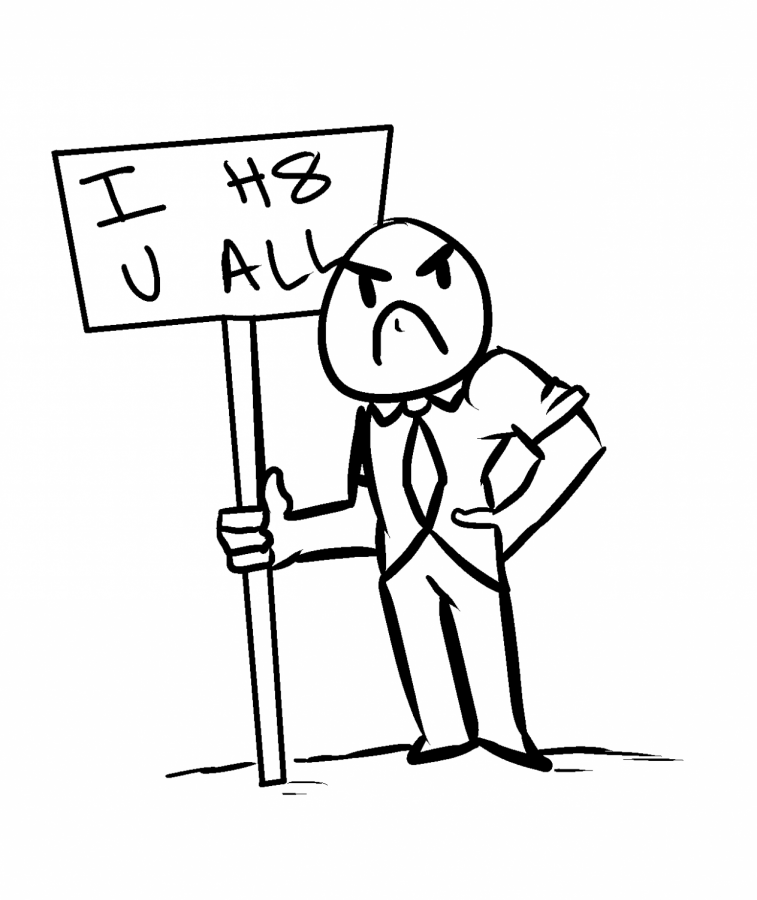 In response to seasonal speakers that come to campus—ones that often challenge the belief systems, ideologies and identities of many NKU community members—the Student Government Association passed a resolution that would alert students and faculty of ‘hate speakers’ arriving on campus.

Passed on March 12, this resolution, drafted by senator Nöel Waltz, is meant to take away the element of surprise some may feel when such speakers pop-up on campus. Currently, they come without warning.

“The model that we have in mind for the resolution is a ‘warn, define and remind’ model,” Waltz said. “Not only would it be warning the students of the presence of [public speakers] but it would also be defining our core values as a university and our separation from the views of these people.”

The resolution states that NKU will follow its mission statement to “be a community that embraces INCLUSIVENESS, diversity, and global awareness in all dimensions of our work.”

Throughout the reading of the resolution on March 12, Waltz defined “hateful speakers” as individuals having “demonstrations with a hateful agenda.”

In an email to The Northerner on April 18, Waltz also said she believes “well-meaning” groups should not warrant a notification.

“The preachers whose agenda is centered around hating the LGBT community would be an example of something that I believe is appropriate for a notification,” Waltz wrote. “A group of well-meaning christians [sic] gathering to discuss the importance of accepting Jesus Christ as your savior would be something that would not warrant a notification.”

The resolution only references instances when “a hateful speaker or group is on campus or in the nearby area,” not all public speakers.

At the center of the resolution are questions of First Amendment rights. Before the resolution passed, groups wishing to come on campus would first contact Ann James, the senior associate dean of students, with details of their speech.

Waltz said another purpose of the notification system is to allow students to organize counter-protests in response to speakers on campus, according to her April 18 email.

“I would prefer that these people who have damaging agendas be out in the open so that activists can oppose them directly,” she wrote.

The resolution references the Charlottesville protests at University of Virginia in August that left three people dead. An alt-right sympathizer drove his vehicle through a crowd as groups for and against the removal of Confederate symbols clashed on UVA’s campus.

Waltz cited University of Cincinnati’s video response to a potential appearance by alt-right talking head Richard Spencer, and that NKU should also “remind” students of its core values by responding to speakers “without directly infringing on [their] speech.”

Though speakers already contact administrators about when they plan to speak, students like Phyla Alderette, marketing chair of Common Ground, are caught off guard by their presence.

She cited an example: members of the pro-life organization Created Equal, which present images of aborted fetuses on campuses and in cities across the country.

“If it wasn’t for that text that you sent me,” Alderette said, motioning to her friend Mariah Jones, “I would have walked out of the Student Union and threw up my lunch.”

The aspect of the resolution to warn students of speakers concerned Joseph Bermingham, who  operates aforementioned Created Equal.

“We do like to talk to as many people as possible and spread our message,” Bermingham said. “I don’t know how this will affect our message, but I think college students should be able to be presented with opinions that oppose their own.”

The history of allowing public speakers to come to campus is a long, often tense one.  Universities often maintain a neutral status of allowing free speech, but as the SGA resolution shows, students are looking for a solution.

NKU’s campus has experienced examples of retaliation against messages considered controversial, even towards student organizations.

In fall 2017, interim president Gerard St. Amand sent an email to campus regarding free speech after someone vandalized an authorized pro-life display of crosses on the lawn outside Nunn Hall.

“While at NKU, people have the same free speech rights guaranteed under the First Amendment of the U.S. Constitution as they would in any other public space in our country,” Amand wrote. “We cannot limit a person’s guaranteed constitutional rights based on the content of their message.

“College campuses must remain safe places for difficult conversations about the issues that may divide us. Vandalism and personal threats stifle that debate, and in the void, hatred and animosity grow.”

In response, while Waltz read the resolution she said that anything that goes against NKU’s core values could be considered hate speech.

“Things like targeting marginalized groups: that would go against our core values of inclusion,” she said.

“It should not be controversial to say that a liberal university accepts the LGBTQ community in 2018,” she wrote.

But, hate speech itself lacks a legal definition. The U.S. Supreme Court has continually shot down any ordinance requesting “hateful speech” be removed from the protections of the First Amendment.

Chase Law Professor and constitutional rights expert Kenneth Katkin said the administration has a need to be “neutral” in regard to speech.

The Constitution of NKU’s Student Government Association states that its function is to “serve as the official representative body of the students” and to “Protect and promote the rights, as well as advocate for the best interests, of all Northern Kentucky University (NKU) students.”

As the university administration considers the resolution, Katkin says students have tools for free speech, and organizations like SGA are created for that purpose.

“Our highest value is to promote all forms of free expression without censorship,” Katkin said. “The university has other values as well and, within some boundaries, creating a welcoming and diverse environment is certainly one of those values.”