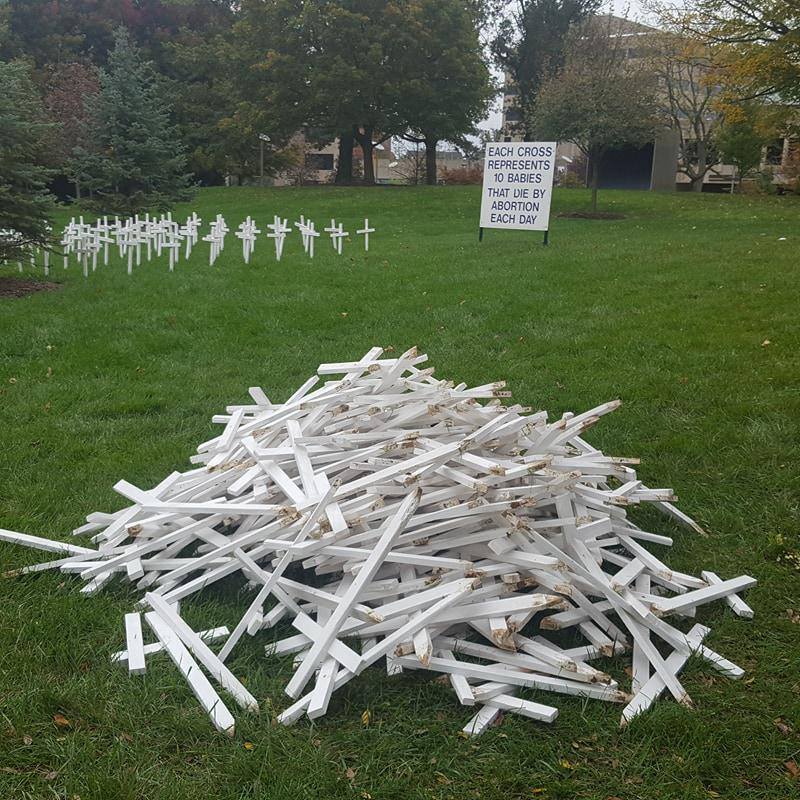 Put up on-and-off since 2006, the display has been vandalized six times.

The array of crosses spread across NKU’s plaza lawn by NKU’s pro-life organization, Northern Right to Life, were uprooted, knocked down and destroyed again early Wednesday morning. A repeating act of vandalism, the incident occurred almost exactly a year previously on Oct. 26, 2016.

Each cross in the display represents 10 abortions that occur daily in America. The incident occurred at approximately 1:48 a.m., and was captured on security footage released by the University Police.

An on-and-off display for the past 11 years, it has been vandalized six times, according to Mia Walker, president of Northern Right to Life.

The University Police posted footage of the incident on its Facebook page. The suspect, wearing a hooded sweatshirt, sweatpants and sneakers, is shown in the video uprooting four crosses. The University Police are currently asking for help in identifying the suspect and ask anyone with new information to call.

Later on Wednesday, Interim President Gerard St. Amand sent out an email to NKU students and emphasized the importance of free speech on campus. According to Amand in the email, since NKU is a public university, people are granted the same constitutional rights to free speech as they are in any other public area. Acts like vandalism encourage negativity and stifle that free speech, he said, and discourage discussion on issues that might divide us.

“If you encounter a speaker whose message offends you, there are acceptable actions you can take. You can ignore them and move on, or you can espouse a contrary viewpoint,” Amand said in the email. “You cannot, however, act in a manner that prevents others from speaking and being heard, including through authorized displays.”

In response to the vandalism, Northern Right to Life held a rally Wednesday to emphasize the importance of free speech on campus.

“We’re rallying for the rights of students to be able to have a display on campus and not have their free speech suppressed by it being destroyed,” Walker said. “What we want to do, is we want to have an open dialogue, and actually be productive instead of just vandalizing displays that students put on campus.”

Hannah Bockweg, sophomore at NKU, participated in the rally with Northern Right to Life. Bockweg said she was disappointed to see the destruction of the display not only because it has happened in previous years, but also because she does not see destruction of property as a productive means of communication.

“I have multiple friends that drove and spent three hours on a Sunday setting up this display that they hope starts conversation and that they care about, and that I do care about as well,” Bockweg said. “It is unfortunate to see that instead of trying to have a discussion about it, or even an opposing protest, people just vandalize things in the dark and in secret.”

Bockweg also emphasized the importance of being pro-life to her. While opposing abortion is part of her point of view, she said being pro-life really means supporting every person at every stage of their life.

“Being pro-life is not just laws, it’s about how you treat people every day. And so, respecting property, respecting other people, and just looking at other people with love, that’s what it means to be pro-life,” Bockweg said.

While pro-life students were present and rallying for free speech, pro-choice students appeared at the rally in opposition of the display.

Rinehard went on to explain that she is pro-choice because she is “pro-woman,” and that she has had negative previous experiences with the pro-life movement.

“I went to Catholic grade school and high school where I saw the tactics of pro-life, where it’s shaming and toxic and hurtful and poisonous. I’ve seen what these things have done first hand,” Rinehard said.

She emphasized her opinion of the pro-life movement often criticizing organizations like Planned Parenthood, a non-profit organization that provides sexual health care to the United States and globally, according to their website.

“This violent rhetoric is not only abusive to women emotionally, it hurts them physically…I’m pro-choice because it’s common sense.”

Rinehard also expressed her freedom of speech by participating in a counter-protest on Thursday. The demonstration included her and fellow members of the NKU Socialist Students organization, standing in front of the crosses holding signs. The women in the demonstration had red paint on their pants, meant to resemble blood.

Our very own @Medi0cre_AtBest organized this counter-protest to the pro-life display! Keep fighting the good fight, comrades! pic.twitter.com/QnNhTH31P4

Freshman Austin Snelling was another pro-choice observer at Northern Right to Life’s freedom of speech rally. He said that restricting access to abortions not only violates a woman’s right to choose what to do with her own body, but may create unsafe situations for women.

Snelling also said that while he was interested to see what happened to the crosses, he also thinks having these kinds of discussions is important.

“I think that it’s important to have dialogue between other political organizations on campus,” Snelling said, “because then we can start to really have the kind of discourse that’s necessary for informed political opinion.”