EDITORIAL: Without job security, how can professors do their job? 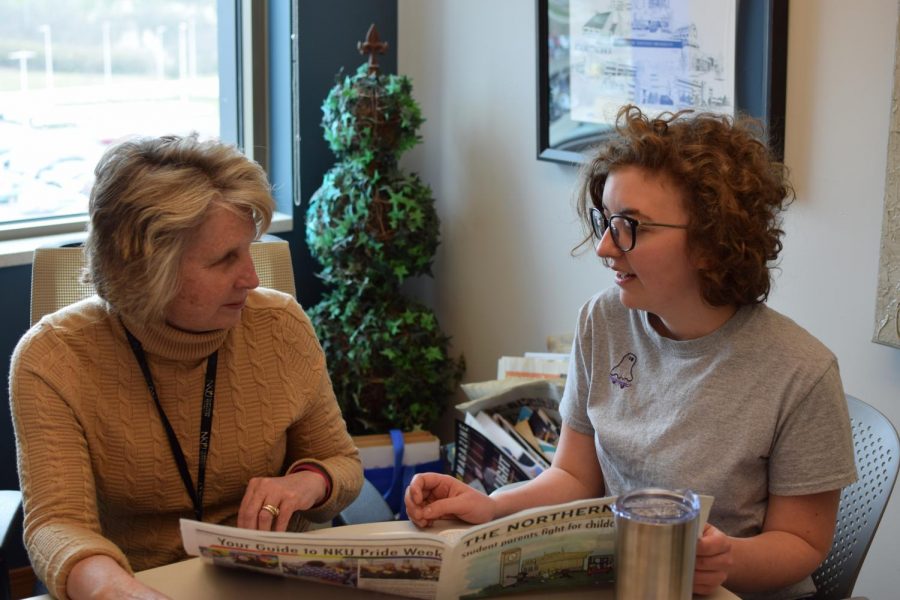 Mackenzie Manley and her professor, and mentor, Michele Day.

Two weeks ago, on Good Friday, many non-tenure track (NTTR) lecturers at NKU received letters that due to budget uncertainties, they may not have positions next school year.

That’s 47 lecturers in the arts & sciences, 15 in informatics, 16 in education, and more across campus. They’re the people that are training our students for their future, now living in gray uncertainty.

At a professional concerns committee (of the faculty senate) meeting last Thursday, professors shared their worries about what’s to come. Provost Sue Ott Rowlands explained that the letters are “required by the faculty handbook if there is a possibility that their appointment might not be renewed for the next year.”

She added that since these letters have been sent out, “no one has been dismissed, laid-off or lost their job. It’s a point of notification. Because of the budget, there is a possibility that we might lose some of our NTTRs.”

Recently, a provision was added to the Kentucky budget that would allow universities to fire tenured faculty when cutting programs if the school faces a financial emergency that cannot be alleviated elsewhere. With this move, the academic freedom inherit to tenured positions is threatened.

Educators and students in Kentucky are worried about what’s to come. Our budget is on the chopping block. In May, I’ll graduate. I feel like I’ve just missed a storm in higher-education. But, I also feel sick.

My question: How are professors to do their job when their security is pulled out from under them? Answer: They really can’t.

Eastern Kentucky University—a university not much different from our own—just cut 153 jobs in efforts to close a $25 million gap. Two sports—men’s and women’s tennis—were discontinued. And, entire academic programs were wiped away, including theater and economics.

I don’t want NKU to be the next EKU.

If the state continues down this path, Kentucky will see talent, merit and skill leave our borders.

As a student enrolled at NKU over the past four years my education has been pivotal. Through journalism and English I have grown not only in my academic knowledge and skill, but as a person. I have felt relentless encouragement from my professors to achieve.

Many of whom have come into the newsroom and guided The Northerner staff on ethics, sources and how to scout out information. They have taught me the power of the First Amendment: a tool that can be used to hold those in power accountable, and to speak on the injustices in our communities.

They have stood for me, so in times of uncertainty I will stand with them.

At the meeting, Irene Encarnacion, a Spanish language lecturer, said that her fellow faculty were caught by surprise. They thought the meeting was merely informational, but then the letters came. “It was a slaughterhouse,” she said.

Not all colleges distributed letters to all lecturers. According to Ott Rowlands, “It was a dean-by-dean decision. They could give letters to the NTTRs they thought were likely [to be laid-off], and others thought that was premature.”

Essentially, deans either made more of a blanket statement or they sent letters to NTTRs more-likely to be cut.

Of the deans that decided to send out letters to all faculty were Kevin Kirby of Informatics, Dr. Diana McGill of Arts & Sciences and Dr. Cynthia Reed of Education & Human Services. Those who chose not to include Dean of College of Health Professions Dr. Dale Stephenson and Dr. Greg Martin, of the College of Business.

According to the faculty handbook, if there’s a possibility your position may be cut before the next school year, letters must be sent by March 31.

“This budget stuff is bad. It is bad, I’ve never seen anything like it in my career. It is bigger than we can easily wrap our minds around,” Ott Rowlands said. “I’m very hopeful that, whatever comes out of the legislature and whatever it means to us, we will be able to save as many positions as possible.”

She added that though it’s too early to know the full extent of how budget cuts will affect not only our university, but all public higher-ed institutions in our commonwealth, it’s still not good.

And I agree—it’s not good. But, if we stand with our educators the future of their students will ultimately be better. They’re the backbone of our society, without them we fail. At the end of the knife, we’ll all be hurt: teachers, students and Kentucky universities as a whole.

If you want to contact your representatives, you can find them here. NKU’s Interim president, Gerard St. Amand can be reached at stamand@nku.edu.