EDITORIAL: Liking yourself is rebellious in a consumer culture 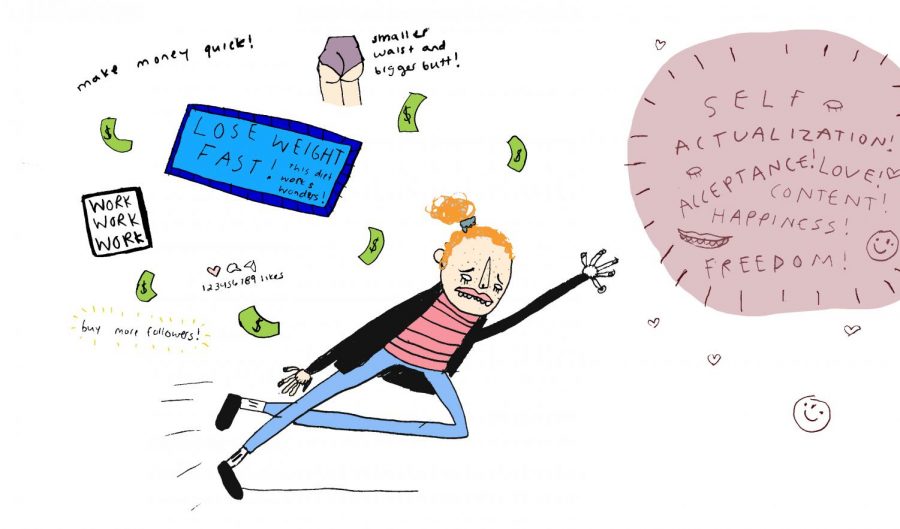 The road to American consumerism has been a slow build, but the core reason you’ll never feel satisfied with your appearances or confident in your ambitions is quite simple: self-esteem is not good for economic growth.

We buy when we feel insecure and worried about personal anxieties. It’s human nature to want to belong, but advertisers remind us on average 5,000 times a day that we are not authentic, complete, beautiful, interesting, or lovable without whatever they’re selling.

But how would we think and treat each other (and treat ourselves) if town hall meetings were blasted through the radio and “promoted” on social media every day? Or 5,000 pieces of thought-provoking art crossed our line of vision daily?

Things to do other than buying stuff

NKU Yoga classes (great tool for practicing gratitude and learning to be present), joining NKU Hiking Club (nature has magic/scientific healing powers that calm us down), enroll in a media literacy course (and learn way more than I could relay in on article), host a potluck dinner (historically, meals are meant to be shared), take a walk around the rec center track (walks boost creativity, for real), looking up un-commercials on Adbusters, or visiting newamerica.org.

It’s important to note that it’s not just these intrusive, unsolicited ads in newspapers, TVs, billboards, magazines, bus stops, schools, race cars, social media and other places businesses are using to reinforce our identity as consumers with the “freedom to buy.” It’s also in our films, our language and even how we celebrate holidays. We might be against food security programs and mandated living wages, but no one has the audacity to criticize charities that request toys for low-income kids’ Christmas trees. Despite having too much stuff to go around, consumer culture has not proven kind to economic inequality. Or the environment. Or anything other than stockholder wealth.

Not to let powerful leaders off the hook, but a recurring moment of clarity throughout this project and others taken on in sociological studies is that systems work the way they are designed.

How did we wind up with this one?

Spanish, French and Dutch colonizers sailed to America ready to exploit land and labor in search of riches, but Puritans and Quakers actually fled England in pursuit of the simple life. Conspicuous displays and pursuits of wealth were forbidden in Massachusetts Bay Colony and Pennsylvania.

Considering the potential of mass production to create more leisure time, the Industrial Revolution was not meant to mess with these cultural norms. Because of the exploitative principles of capitalism, however, factory hours ran long, but laborers worked just enough to subsist. They knew that true wealth was time for self-chosen activities. And although wealthy Americans began to proudly display their fortunes near the dawn of the 20th century, Affluenza: How Overconsumption is Killing Us–and How to Fight Back authors noted, “organized labor had not yet then accepted the definition of the good life as the goods life…demand for shorter hours topped labor’s agenda.”

Industrial leaders had to create demand for mass production by gradually making consumption a way of life. The Great Depression and World War II slowed the path to American consumerism, but with expanded credit, generous government loans, urban sprawl, extended shopping hours, and an increasing amount of department stores, the beast was unleashed; all things disposable were embraced.

Postwar, the faster producers could get customers to throw stuff away, the deeper industrial giants’ pockets stretched. Even if products were not “designed for the dump,” advertisers bet their paychecks they could embarrass us for wearing the same outfit twice or driving last year’s Ford model. Anybody who was anybody kept up with the trends.

Hence, our current social organization around mass production and consumption. An environment where people seek both emotional and social needs through shopping.

Our houses may be bigger than ever, but they are filled with less satisfied people (when they are filled at all). Despite steady technological breakthroughs in productivity, the average American work week has risen, cutting time engaged in social relationships. Americans’ happiest year on record is 1957.

Tim Kasser, professor of psychology at Knox College and author of The High Price of Materialism, has studied this topic extensively and consistently finds that the more people value materialistic aspirations (a high salary, lots of stuff, fame) the greater their chance of experiencing depression, anxiety and substance abuse. It’s worth noting that suicide is the second-leading cause of death among individuals age 15-34 in the United States and that Kentucky is at the height of an opioid crisis.

Something has to give, but we must remember systems work the way they are designed. Real change comes from rewriting the rules.

Gross domestic product seems to be the only indicator we rate political leaders on these days. GDP grows when car accidents happen, or when oil spills. Pharmaceutical company stockholders benefit every time a doctor writes a prescription for antidepressants. Blindly celebrating “development” rather than tracking which sectors are expanding is irresponsible.

Small groups of makers and shakers have opted out of the “keeping up with the Joneses” rat race to focus on what Aristotle, Jesus, and social scientists all agree are the important things in life: service to others, relationships with friends and family, connection with nature, and work of intrinsic moral value.

It will take more than a village to redesign this system of blind and obsessive consumption, but let this be permission to enjoy your life. Validation to discover that you are enough without trendy products. Self-love is not selfish; its protection in a culture that profits from your fear.

This story is part of a self-care and self-love series. Over Valentine’s week The Northerner takes a glimpse at the different ways individuals and communities map out concepts of caring for one’s own being. Check out three students’ approach here, an editorial on self-love in a consumer society here and how Norse Violence Prevention center empowers survivors of power-based violence to find that love and belonging here.

Check out other stories in our self-care package: on NVP helping survivors bring self-care back into their lives, how a community in Madagascar approaches care and  how different students approach concepts of self-love.