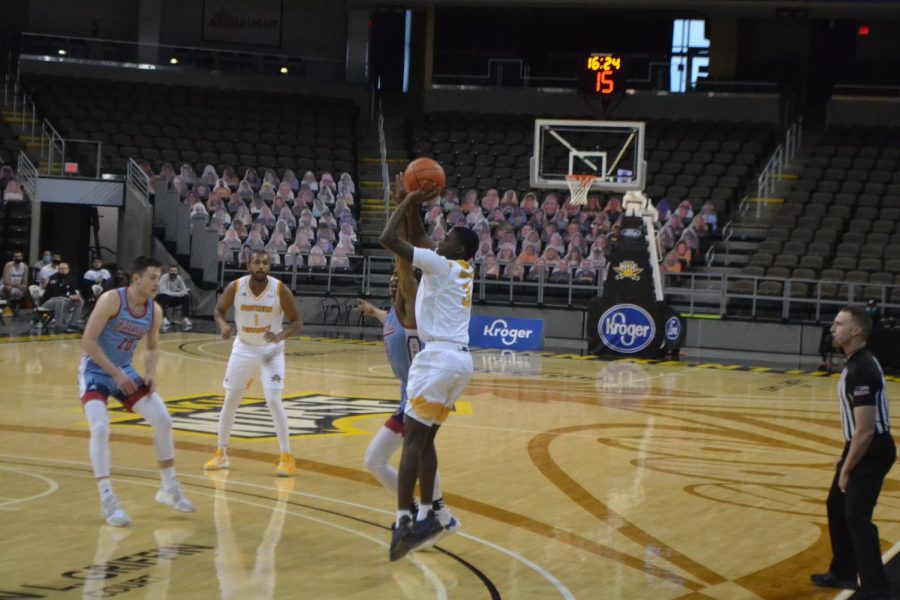 After taking the Horizon League by storm in his first season on the Northern Kentucky men’s basketball team, freshman guard Marques Warrick has been named the 2020-21 Horizon League Freshman of the Year.

Warrick displayed an offensive skill set that immediately became one of the best in the Horizon League since his first game of the season, averaging 15.9 points per game in the regular season, shooting 37.2 percent from three-point range as well.

In conference games, Warrick was even better, averaging 17.5 points per game, while shooting 38.7 percent from three.

Despite being just a freshman, there was no moment too big for Warrick during this strange, COVID-19 afflicted season.

In his very first collegiate game against Ball State back on Nov. 25, Warrick posted 14 points, playing 35 crucial minutes for the Norse as they picked up their first win of the season against the Cardinals.

Against Purdue Fort Wayne on Jan. 2, Warrick dribbled around at the top of the key in a tie game, drove into the lane and sank a contested shot in the lane with just 2.4 seconds remaining on the clock, giving the Norse a 70-68 victory over the Mastodons.

On Jan. 9, with the Norse in a crucial battle against the Cleveland State Vikings, the eventual Horizon League regular season co-champion, Warrick exploded for a career-high 25 points, keeping the Norse competitive before falling in overtime to the Vikings.

But perhaps Warrick’s best moments of his incredible freshman season came during last weekend’s series against one of the Horizon League’s top teams, the Wright State Raiders. Warrick posted 23 and 21 points respectively on Friday and Saturday night, burying a deep triple on Friday night that all but cemented NKU’s massive, 81-75 win.

“Happy for Trevon and Ques. Very deserving. Both are consistent and continuing to get better,” Head Coach Darrin Horn said in a tweet on Tuesday.

In addition to Warrick taking home Freshman of the Year honors, three members of the Northern Kentucky women’s basketball team were also honored by the Horizon League for their contributions during the 2020-21 season.

Redshirt junior guard Lindsey Duvall was named to the All-Horizon League Second Team. Duvall led the Norse with 16.1 points per game, after transferring from Louisville. Duvall was the most lethal shooter on NKU’s roster this season, shooting 36.9 percent from three and 78.7 percent from the free-throw line.

Finally, senior forward Grayson Rose was named to the Horizon League All-Defensive team on Tuesday. Rose averaged 1.6 blocks per game during Horizon League action, leading the Norse with 25 blocks for the 2020-21 season. In addition, Rose grabbed 3.9 defensive rebounds per game.

The NKU WBB team will be in action on Thursday night at BB&T Arena, hosting the Robert Morris Colonials for the first round of the Horizon League Tournament.