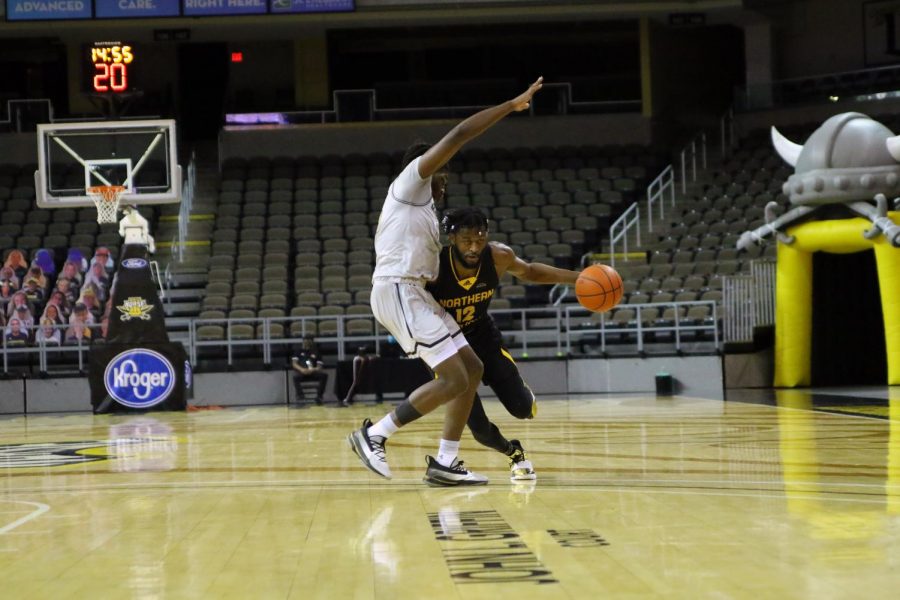 Trevon Faulkner (12) drives past a Purdue Fort Wayne defender. The Norse would defeat the Mastodons 70-68.

With Saturday night’s game tied at 68 with just 14 seconds remaining, Northern Kentucky men’s basketball Head Coach Darrin Horn put the ball in the hands of his poised freshman guard Marques Warrick and allowed him to be the hero in the second game of NKU’s two-game sweep of the Purdue Fort Wayne Mastodons.

Warrick dribbled the ball at the top of the perimeter, waited patiently to blow past the Purdue Fort Wayne defender, maneuvered through the lane and fired a contested shot in the paint, getting it to roll in the basket with just 2.4 seconds remaining and securing a come from behind victory for the Norse that pushed their Horizon League record to 3-1 on the season.

Horn said that the final play was designed to go to Warrick, though junior guard Trevon Faulkner was also an option should Warrick have been double-teamed at the top of the key.

“I’m just of the belief that you put the ball in player’s hands and let them make plays at the end of the game,” Horn said. “We had one of the two guys that we felt best about doing that involved, and Marques made a great play.”

After a first half that gave the impression of another closely contested game, much like the one that the two teams played on Friday at BB&T Arena, the Mastodons turned their 29-27 halftime advantage into a double-digit lead quickly in the second half. Just four minutes into the second half, PFW went on a 13-4 run, increasing their lead to 42-31.

But the Norse continued to chip away, led by Warrick and another freshman Trey Robinson.

“We just had to lock in on defense, the offense will come, offense is always going to be there, but on the defensive end we had to lock in and get stops,” Warrick said.

The Norse quickly followed the PFW run with a 7-0 scoring run of their own, with five of those points coming from Warrick. The freshman from Lexington recorded his second straight game of 22 points, leading NKU in scoring during each game this weekend.

Warrick said that he has continued to gain confidence in his ability to find his own shot and play a major role in the offense since the first game of the season, despite being just a freshman.

“I knew they expected a lot out of me, and I have definitely tried to live up to those expectations,” Warrick said.

When the Mastodons began to stretch their second-half lead once again, it was Robinson who answered the call with timely baskets throughout the half. The freshman finished with a career-high 17 points, including eight straight with under five minutes remaining that gave the Norse a 64-60 lead, their first lead of the half.

NKU retained that lead all the way until the 1:12 mark in the second half, when a pair of free throws from PFW’s Deonte Billups evened the score. The Norse followed with a crucial defensive stop with under one minute to play, setting the stage for Warrick to knock down the game-winner.

An important key for the Norse, not only in Saturday’s game, but Friday’s as well, was forcing the Mastodons into turnovers, and keeping their leading scorer, guard Jarred Godfrey, from having a breakout performance. The Norse forced PFW into 18 turnovers, after forcing 23 the previous night.

“I think our effort is there. This is a team that is going to be a work in progress defensively, but the bottom line is we guarded good enough tonight to win,” Horn said.

NKU once again struggled to consistently knock down shots, both from the field and from behind the arc, making 26.9 percent of their three-point attempts on Saturday. Part of that struggle may be attributed to the absence of senior wing Adham Eleeda, who was unavailable for both games this weekend against PFW.

“This team is going to be a work in progress, and quite honestly that’s on me,” Horn said. “I’ve got to make sure that we find the best way for these young guys to be successful.”

In the end though, the Norse were able to execute on crucial shots when they needed them, and no shot was bigger than the one by the two-time Horizon League Freshman of the Week Warrick as the final seconds ticked away.

“Give our guys all the credit for how they competed, especially down the stretch,” Horn said.

Up next, the Norse will hit the road for a two-game series against the Cleveland State Vikings on Jan 8-9. Both games are currently scheduled to tip off at 7:00 p.m.