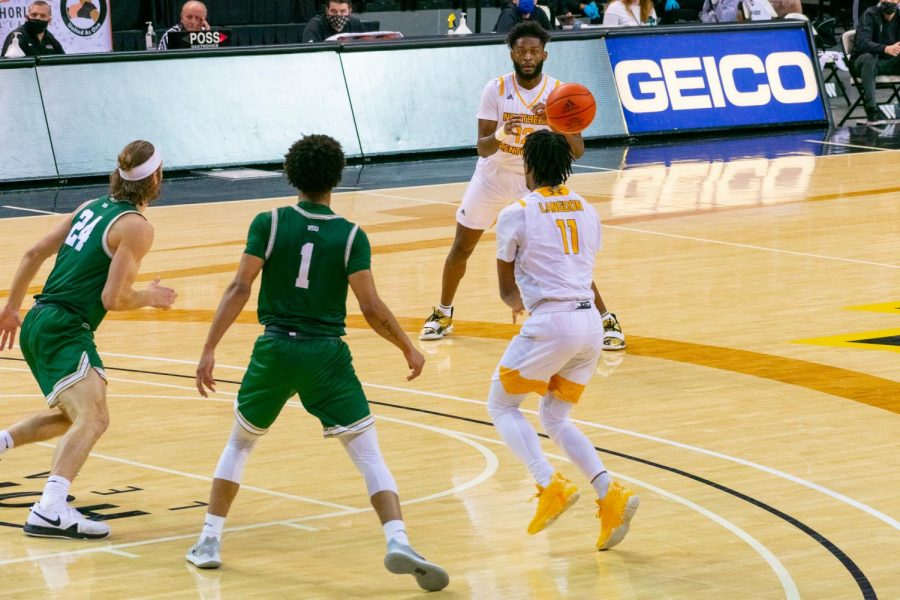 But for 40 minutes of action on Friday night, the Norse proved that they are still the reigning Horizon League Tournament champion and a force to be reckoned with in the Horizon League as Postseason play looms near, beating the Raiders 81-75 at BB&T Arena.

Of course, the personnel has changed since the Norse took home the title back in March of 2020, before the pandemic halted the sports world, but two players from last season’s team, guards Bryson Langdon and Trevon Faulkner, were instrumental in leading the Norse to the upset victory.

Langdon, a junior guard, had 15 points, six rebounds and seven assists, while Faulkner had 17 points, going 5-6 from the free-throw line.

“It makes us very dangerous, because it gives us a chance to stay aggressive,” Langdon said about the balanced scoring attack from the Norse on Friday.

As important as the veterans were, the Norse would not have beat the Raiders on Friday night without the contributions from two freshmen, playing in their first edition of this storied rivalry. Guard Marques Warrick led the team with 23 points, while forward David Bӧhm added 14 points and six rebounds.

“We always knew the offense was there, but now [Bӧhm]’s becoming a guy that gives us good stuff on the defensive end and rebounding,” Head Coach Darrin Horn said.

The first half began at a pace that the Norse had not been used to playing at for much of the season. NKU, one of the slowest offensive teams in the country, was forced to run with the Raiders, who typically play a high-octane style of offense, trading baskets with WSU throughout the half.

NKU struggled to slow down the Raiders from beyond the three-point arc, allowing two threes each to WSU guards Trey Calvin and Tim Finke. Center Loudon Love, Wright State’s leading scorer and prominent Horizon League Player of the Year candidate, had only five first half points, a testament to the defensive effort given by the Norse on Friday.

“We really felt like a big part of the game was trying to do a good job on the glass, and so a lot of what we did defensively was to try to give us our best chance to do that, and fortunately we were able to do a good job with that,” Horn said.

The Norse were able to out-rebound the Raiders for the game 39-35, led by junior forward Adrian Nelson’s 11 boards.

The Norse shot just under 50 percent from the field in the first half, and headed into the break leading by four, 42-38.

NKU kept that first half energy to open the second half, as Wright State’s Grant Basile turned the ball over on a bad pass on their first possession, setting up a Warrick jumper to push the lead to six.

But the Raiders, being one of the most efficient offenses in the Horizon League, would not just go down quietly, as WSU pushed back ahead, capitalizing on a pair of free throws from an NKU technical foul, assessed to Horn for arguing with an official.

With the score tied 51-51 and just over 14 minutes remaining, the Norse knocked down a pair of three-pointers on consecutive possessions, one from Bӧhm and another from Langdon, pushing the lead to six.

NKU would eventually push their lead even further, using a Bӧhm and-one layup to make the score 67-57 with 7:24 remaining.

A scoring drought would follow however, as the Norse failed to put the ball in the basket for over two minutes, allowing the Raiders and Love, who scored 11 second half points, to make one last valiant effort at a comeback.

However, as Norse fans who have watched this 2020-21 team develop throughout the year have come to find out, there is no situation too crucial or moment too tense for the unflappable freshman guard Warrick.

With just 1:04 left in the game and the Norse clinging to a tight 74-70 lead, Warrick proved why he is considered a favorite to take home the Horizon League Freshman of the Year award, pulling up and drilling a three from well beyond the arc, increasing the lead to seven.

“The bigger the moment, the better he seems to be,” Horn said about Warrick.

Friday’s win was the first for the Norse against Wright State since Mar. 12, 2019, when the Norse defeated WSU to win their second Horizon League Tournament title. The win was also NKU’s eighth in their last nine games.

The two teams will do it again tomorrow night from BB&T Arena, concluding the Horizon League regular season with Senior Day at NKU. The Norse have just one senior, wing Adham Eleeda, who will be honored tomorrow before the game.

“It feels good, but we’re just coming back to play tomorrow, worrying about the next game tomorrow and getting ready for the conference playoffs,” Langdon said.

Saturday’s game will be broadcast on ESPN3 and will tip off at 5:00 p.m.