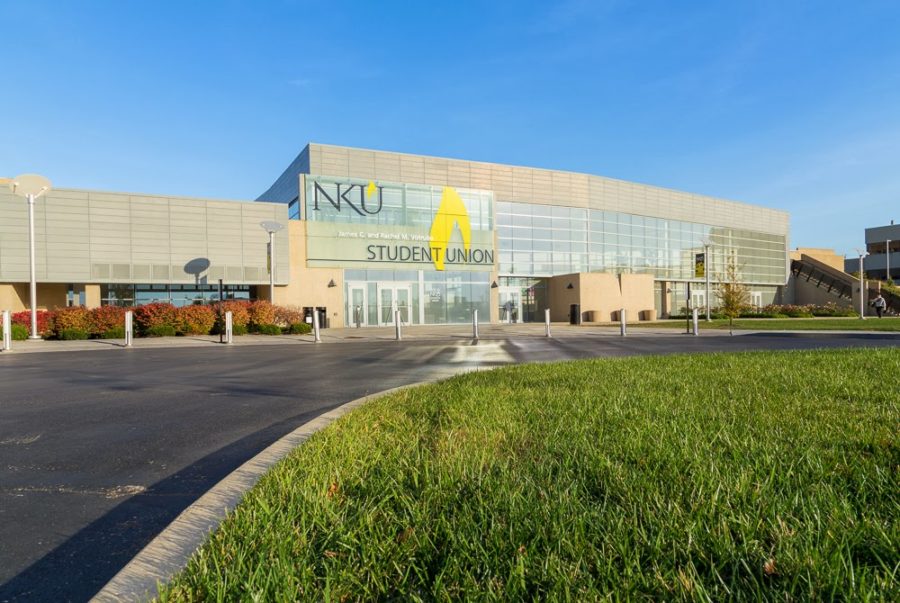 The Board of Regents met Jan. 18 in the Student Union ballroom. The meeting was also livestreamed on NKU website.

The Board of Regents announced Bonita Brown as Northern Kentucky University’s interim president and discussed presentations on restructuring the College of Informatics, strategically planning University Housing and updating the Reposition Plan at their Jan. 18 meeting. Taking place in the Student Union ballroom and livestreamed, the meeting saw many previously undisclosed details.

The Joint Finance and Policy Committee meeting began with a brief executive session, after which the board confirmed Brown, previously vice president and chief strategic officer, as interim president with a unanimous vote.

“We talked to Bonita and engaged her interest and thankfully we were blessed with a response that she was enthusiastic about filling the role,” commented chair of the board Rich Boehne. “It’s not an easy job. It could be as hard or in some way harder than being the permanent president of the university. We certainly solicit support from all of you to help Bonita get off to a great start as we carry through this transition period.”

The board also appointed five regents—Kara Williams as chair, Ashley Himes, Nathan Smith, Elizabeth Thompson and Brad Zapp—to the official Presidential Search Committee, who will bring a full proposal of the committee’s structure and membership to the board meeting in March. It will be the first time NKU has had a presidential search committee chaired by an alum, past Student Government president and sitting regent.

College of Informatics: Restructuring and opportunities

The morning session then went over two presentations, first by College of Informatics faculty and students concerning the college’s structural shift into the School of Computing and Analytics and the School of Media and Communication last fall.

According to COI Dean Kevin Kirby, the reorganization occurred to simplify the college’s identity for prospective students and stakeholders, elevate the visibility of NKU’s informatics programs and save money while maintaining efficiency and enrollment growth. In terms of total headcount, COI has grown faster than NKU as a whole, with a 59.8% increase over 17 years since its founding in Fall 2005.

2022 served as pilot year for the transformation with a new interim leadership team, delivering $227,000 in recurring cost savings and $868,800 in new annual revenue, Kirby said.

The School of Computing and Analytics has eliminated the Master’s in Computer Science and Master’s in Computer Information Technology degrees, redirecting resources into higher-demand programs. Interim school director Traian Marius Truta gave special mention to a partnership with St. Andrews Georgian University in the Republic of Georgia, initiated through the U.S. State Department to enroll 60 Georgian students annually in NKU’s online Master’s in Cybersecurity program.

Jessica Lester, a data science alum, presented an overview of her capstone project with Fidelity Investments, where a team of four students utilized data tools and programs to analyze customer sentiments to the company on social media.

Within the School of Media and Communication, The Northerner advisor Michele Day, editor-in-chief Braden White and news editor Emily Sisk presented on the student newspaper’s content sharing partnership with LINK nky, a news startup focused on the Northern Kentucky region, and the positive impacts it has made on the student journalists’ outreach and professional prospects.

Housing: Issues, solutions and the costs

Vice President for Student Affairs Dr. Eddie Howard and University Housing Director Scott Patton then updated the board on the strategic plan to enhance campus housing. Howard arrived at NKU in 2021 amid student protests and a housing incident that involved the police, referring to the vandalism of the rock in Boothe Residential Village by Patriot Front, a white supremacist hate group. Looking further into housing revealed to him security issues, inadequate governance and a housing department unable to track payments to verify student enrollment. He decided to make immediate changes, first within the leadership structure by hiring Scott Patton as housing director.

Within his first 90 days as housing director, Patton observed a plethora of concerns: lack of safety, poor upkeep and facilities management, complicated bureaucracy that hampered students’ progress, campus partners reporting that housing was unpleasant to work with, discrimination and harassment of students with underrepresented identities, inconsistent and inaccurate communication, financial practices that deviated from official policies, lack of accountability and leadership, and an overall sentiment among students that housing did not care about them or their experiences. It was not uncommon to see students leaving the housing office crying, he said.

In light of these many issues, Patton and the new housing staff came up with a plan centered around community engagement and cultural competence.

“We needed to put more investment in fiscal viability. We needed to be innovative and creative on how we were serving students, and that innovation and creativity would yield better services for students and oftentimes at a more fiscally reasonable approach,” Patton said.

In the presentation, he compared NKU’s housing rates to those of other schools in Northern Kentucky and the Greater Cincinnati area, showing that NKU was priced significantly lower than its counterparts. He also favorably compared the residence halls with nearby off-campus properties in terms of furnishings, utilities, transportation and available resources for students.

Housing occupancy was at its peak in 2016 with 1,863 students living on campus, equaling 92% occupancy. However, Patton noted that just because the rate of occupancy is high does not mean students are paying their bills. In the fall of 2021, he found 800 students without a plan to pay for housing and 360 students who were not enrolled in at least six credit hours as required by their housing contract.

In contrast, by the start of the spring 2023 semester, there are only 25 students without a payment plan and no students enrolled below the minimum credit requirement. Dr. Eddie Howard credits this shift to Academic & Billing Coordinator Nicole Jones, who devised a way to ensure students have a method and ability to pay their bills before moving in.

Patton emphasized the need to fix operational issues in housing before they can pull all of their weight behind delivering an enjoyable residential experience. One such issue was a software system unsupported by IT or other campus departments, resulting in errors like students having rooms booked that they did not sign contracts for, receiving wrong apartment numbers or being able to select rooms that were actually storage closets or lounges.

Beside fixing the faulty system, Housing invested over $150,000 in security cameras, created a three- to five-year plan, repurposed and created new positions to redefine staff as not just property managers but as educators, all while strengthening student life experiences with thoughtfulness and care.

Patton also spoke of the need for open communication—with reference to the recent water pipe burst in University Suites, Norse Hall and other campus buildings—and to maximize usage of the housing budget. The latter means adopting fiscal practices that align with the university’s financial offices, having conversations about return on investment in terms of facilities quality, and focusing on marketing and branding.

In answering a question about the possibility of leasing land to building developers, Vice President for Administration & Finance and Chief Finance Officer Jeremy Alltop revealed that the amount invested into campus housing over 2018-2021, totaling $40 million, was mostly borrowed money, and that over half of the housing budget was debt surplus that accumulated on borrowed funds over many years.

“This is embarrassing, it really is. These facilities are just not up to par … I do see that you are turning this around, but the bottom line is you’ve got a facility problem. A facility problem that was a result of decisions by previous administrations in the board,” Perry said, adding that he would not want to waste money on a ground lease and investments with no returns. “Every time I sit here I see these problems and then we do absolutely nothing with it. We just put some bomb off and give them another $4 million.”

Dr. Howard was optimistic that, although NKU is in a significant amount of debt at this point, investment in housing and maintenance would produce an eventual turnaround several years from now.

According to Cecil, 34 tenured or tenure-track faculty members applied for the Faculty Voluntary Separation Program introduced last semester, which allows them to leave their positions at NKU with a lump sum equaling 80% of their salary and $10,000 in health care spending. Decisions regarding their eligibility for these incentives will be finalized and communicated in early February this year, with final decisions due late March.

That brings the number of vacated tenured or tenure-track faculty positions to 31—41 if positions planned through attrition are included—as of Dec. 31, 2022, along with the vacation of 15 non-tenure-track renewable positions and one senior administrative position in the provost’s office. The downsizing has freed up approximately $2.4 million for budgetary reductions or required salary savings.

Cecil admitted that class sizes would increase and more adjuncts would be used as a consequence of these decisions. Concurrently, the university has approved the search for 10 tenure or tenure-track positions and 14 non-tenure-track renewable positions for the year 2023.

Outside of faculty and staff, the Reposition Plan continues to look for expense reductions in various aspects of NKU operation, from reviewing and removing duplicate software to more efficient gasoline and energy usage. On the other end, the plan outlines increasing parking rates over 2023-2024, improving housing occupancy and implementing a $10/month Campus Recreation Center membership fee for faculty and staff, effective July 1 this year.

Regarding financial aid realignment, another core pillar of the Reposition Plan, the new EDGE program has been and will continue to be applied for international spring admissions, with EDGE changes for domestic out-of-state students and changes in merit programs scheduled for later this year. Alltop said anecdotally NKU remains testing optional, but the slots for merit scholarships are limited.

As the meeting drew to a close, Board of Regents chair Rich Boehne stated that they might do away with the “Joint Finance and Policy Committee” naming and simply call the two sessions “board meeting.”