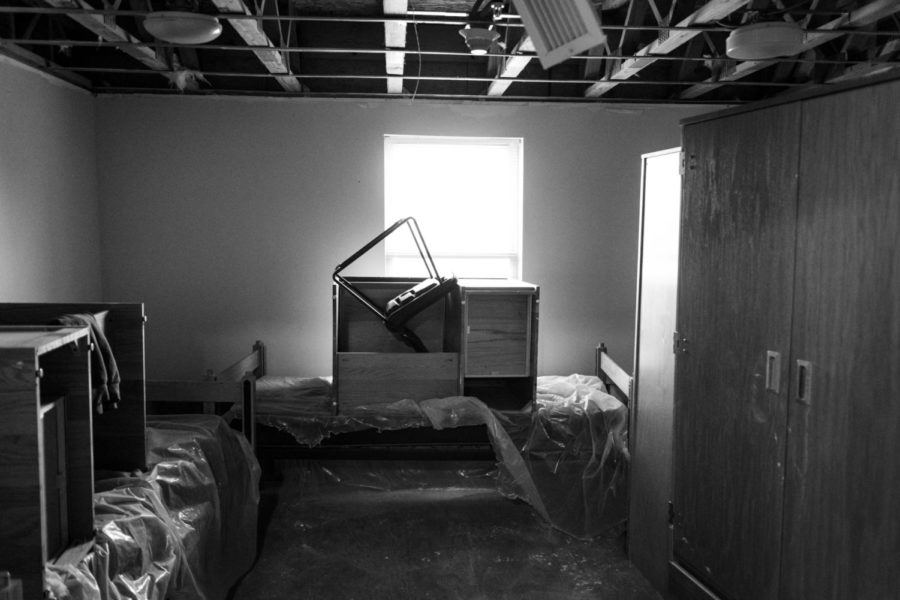 Gallery|3 Photos
Water damage in University Suites called for the closure of all four floors of the building’s north wing throughout the spring semester.

Some students living on campus received a rattling Christmas-day email from housing stating their residence hall had experienced flooding from burst water pipes.

On the days leading up to Dec. 25, Northern Kentucky experienced single digit temperatures, wind chill below zero and winds of up to 40 miles per hour. Two residence halls were impacted by the flooding: University Suites and Norse Hall. Griffin Hall, Lucas Administrative Center and the soccer facility also experienced minor impacts, according to university administration. The Northerner spoke with affected students from both dorms as well as administration.

Christmas day seemed all calm and bright for senior Aminata Gueye. The finance major had made the decision to stay in her dorm at University Suites over the winter break and was carrying on with life as usual: she woke up on Christmas morning, took a shower and ordered food to be delivered to the suites. Around 2 p.m. her food arrived and she walked out of her room to retrieve it. As she was walking down the hallway, her resident assistant approached her.

“What are you doing here,” the RA asked. Gueye responded in a matter-of-fact way, “I live here.”

The RA informed her that the residence hall had been evacuated due to flooding and water damage, and the water was going to be shut off and the fire alarm system disabled. Gueye later realized an email had been sent in the early hours of Christmas morning, something she hadn’t thought to keep check on considering the holiday. The email said University Suites would be closed to residents until Dec. 27 at 8 a.m., and at that time residents who were staying through the break should be able to return like normal.

In the meantime, Gueye was forced to move to New Residence Hall. She was not provided any assistance in the moving process, and since the senior doesn’t have a car on campus, she trudged down the sidewalk in the frigid temperatures, toting a suitcase with a few belongings to her temporary residency.

On the night of Monday, Dec. 26, the night before residents were supposed to be able to move back into University Suites, another email landed in Gueye’s inbox: the damages to the residence hall were too extensive and students wouldn’t be able to move in until Friday, Dec. 30.

To her dismay, Gueye received yet another email on Thursday, Dec. 29, stating that the University Suites fire alarm system was still disabled and the updated move-in date was now Wednesday, Jan. 4.

The email thread did not end there: on Tuesday, Jan. 3 another message came through Gueye’s inbox. This email stated that the north wing of University Suites would not reopen for the duration of the entire spring semester and, once again, students could not return to their residency until Friday, Jan. 6.

All the while Gueye remained in New Residence Hall with only a few belongings, since she had been under the impression her stay in New Hall would only be for two days. Gueye was still working at her on-campus job through winter break and needed more clothes and necessities that were stuck in her suite. When she attempted to go back to University Suites to bring back more belongings, she was denied access to her room.

Gueye explained to the residence life coordinator that she had only prepared for a couple days when she was originally displaced and it had been several days later by that point. The coordinator responded that she should simply ask her workplace to provide her a uniform. After much back and forth, the senior was allowed to go into her room and take belongings back to New Residence Hall.

When Gueye entered University Suites she was shocked. Carpets were pulled up, residents’ personal belongings were stored in trash bags and ceiling tiles were missing. Some drywall was totally gone, to the extent that one could see into other rooms full of possessions.

Upon entering her suite, Gueye was even more aghast. Personal belongings that were not her own littered the room. The senior realized these items were from another resident’s room that had suffered damage from the flooding. She said her own things had been moved about and she had been given no notice that someone else’s belongings would be brought to her personal room.

Through all the chaos, Gueye received contradictory messages about what her next residency fate would be. At one point, she received an email telling her she would not be able to move back to the suites at all and would instead be sent to live in Northern Terrace for the spring semester. A few days later, she got another email saying this was no longer the case and she could stay in her suite for the spring.

While much of University Housing’s focus has been on University Suites, some rooms in Norse Hall did not make it out of the subzero temperatures unscathed.

Junior Evey Cooper lived in a single-occupancy room in Norse Hall, meaning she had her own space without any roommates. While she was back home in Lexington for the winter break, she too received an alarming email on Dec. 27 from housing director Scott Patton. The email, sent from a do-not-reply address, said some water pipes had burst in the residence hall and more information would be sent the next day, Dec. 28. But that additional information promised to be sent the next day never came, and Cooper was left in a panic, wondering if her room and personal items had fallen victim to the water damage.

Cooper was alerted she could return to campus on Dec. 30 to inspect the damage to her room. Upon arriving at Norse Hall, concern was eminent as Cooper noticed her neighbor’s door that gave access to the entire room was left wide open where anyone could enter. Fortunately, the junior’s biggest losses were rugs that had been spread across her floor. Her neighbor, however, was not so fortunate, as they had “complete destruction of property,” Cooper said.

While Cooper had received the initial email detailing the situation from housing director Patton, she did not receive further word from him. It was her residence life coordinator, she said, that kept her updated through personal texts and calls.

Because Cooper’s room and other efficiencies suffered water damage, she was informed she would not be able to stay in her single-occupancy room for the upcoming semester. Cooper could move to Callahan Hall in a single room or stay in Norse Hall and move to a double room, where she was promised her own bedroom at no additional cost. The latter was Cooper’s preferred choice, and the next step was determining when she could move rooms.

Originally, Norse Hall residents who were required to move were told they could choose their preferred move-in date of Jan. 4, 5 or 6. Then, communication came through that all Norse Hall residents would have to move on Jan. 6. Cooper felt she was cornered into moving at a time that best suited housing, not the residents.

The flooding and water damage to residence halls could not have been prevented, according to chief financial officer/vice president for administration and finance Jeremy Alltop.

What happened, according to the CFO, was ice got into the pipes, which expanded and caused them to burst. The water that ran out of the burst or ill-fitting pipes caused the damage. Some of the pipes were located in the walls or the ceilings, unable to be seen from the outside until they ruptured.

Alltop said housing worked quickly to respond to the issue, with staff members coming in throughout the duration of the break. Outside contractors who specialize in remediation were hired immediately and worked diligently, removing drywall and insulation in some situations.

“We had lots of staff here on Christmas Eve, Christmas day and every day thereafter … away from their families and their holiday time to make sure that got addressed,” Alltop said.

He also confirmed that all four floors of the University Suites north wing will remain closed for the spring and estimated construction may take around eight weeks to complete. While not all rooms in the north wing were damaged, all students residing in the area are required to move because of possible disruption and noise that will come from construction.

The chief financial officer was adamant that the heat was on in all of the buildings throughout the break. He said the heating units were just not able to keep up with how cold it was outside.

Cooper, however, said that her heat had not been working prior to her departure for the break. The junior said she spoke with a maintenance staff member who told her “until the school turns up the boiler you will not get hot air.”

Gueye questioned why the university hadn’t replaced the heating system in University Suites, one of the most populated and costly residence halls. She also posed the question of what will be done to ensure a similar situation does not happen in the future.

To this, Alltop said, “You’re always doing preventative maintenance. The real issue here is that it was just really cold for a long period of time.”

For students whose belongings were damaged, housing is working to help file insurance claims and reimburse the cost of replacements. The university is insured by the state according to the CFO, and the process to replace items has already begun. As far as how these restorations will affect the university budget, Alltop said administration will not know until all is said and done. While insurance will cover many expenses, he said contractors and staff members who came in over the break must be compensated from the university.

Apologies were expressed to those students who were impacted by the damage.

“It was an act of weather and unfortunately those sort of things happen, but we will work our best to minimize the impact on students,” Alltop said.

The Northerner requested comment from housing director Scott Patton but was instead referred to vice president for administration and finance Jeremy Alltop.