Charter school decision approaches: What it means, both sides weigh in

NKU has been proposed as a regional charter school authorizer, which the Board of Regents may accept or deny at their upcoming meeting 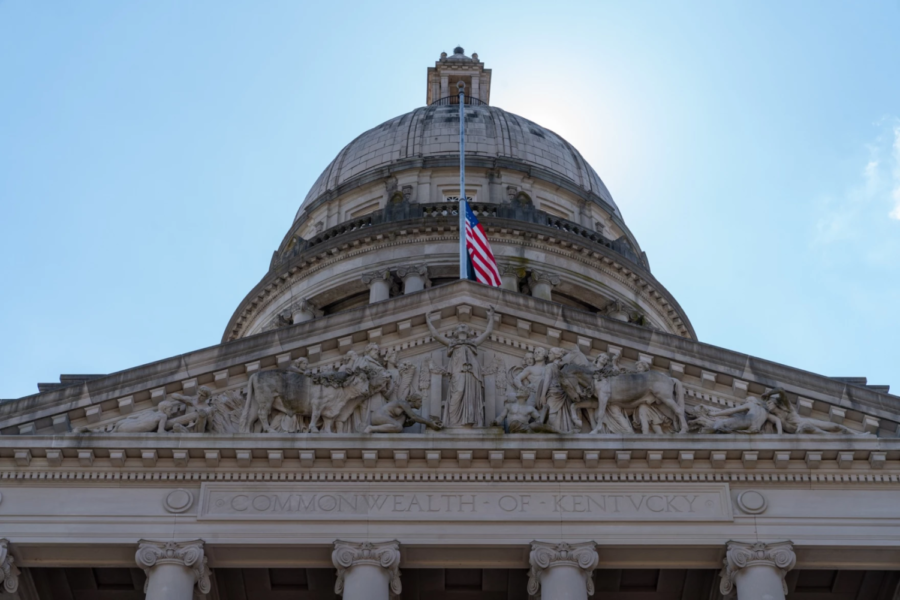 The Kentucky State Capitol building in Frankfort has seen much action regarding charter schools over the years.

NKU Board of Regents will decide if the university will become an authorizer for charter schools at their upcoming Dec. 13 meeting.

The board must respond either yes or no to becoming an authorizer, which, if voted yes, would mean the university is responsible for oversight of charter schools. If voted no, the buck will be passed to local school districts to serve as a substitute pilot project authorizer.

Rich Boehne, Board of Regents chair, said the board has spent a large amount of time understanding all sides of the issues, including proponents and opponents. Boehne said in his mind, what’s most important is guarding the university while also taking advantage of opportunities.

“You’d be asked to oversee not just the university, but another educational system in addition. Is it an opportunity or a detriment long term to the university? And [we] have not reached any conclusion at this point,” Boehne said.

What are charter schools and how is Kentucky involved?

Charter schools are publicly-funded, tuition-free K-12 institutions that are independently run. As U.S. News & World Report writes, rather than falling under a public school district, charters base their standards and rules on agreements with state or local governments. 45 states and D.C. currently have charter schools.

Charter school legislation has circulated through the Kentucky government since 2017, but in 2022, House Bill 9 was passed and provided funding provisions for the schools. Two destinations were set as the pilot project locations: Northern Kentucky and Louisville.

Northern Kentucky University said in a March 2022 statement they did not ask to be included in the legislation as a potential authorizer; Boehne said the opportunity just appeared.

Faculty Senate President John Farrar says he can see the value in additional choices for where parents send their children, but the problem lies in the risk of success.

“The problem is that the success of charter schools is mixed. There’s some that are successful but many aren’t successful, so it’s a gamble,” Farrar said.

Members of Northern Kentucky Cooperative for Educational Services (NKCES) took to the Nov. 9 Board of Regents meeting to denounce NKU’s involvement with charter schools and went as far as to indicate that, if NKU made the decision to become an authorizer, the 35 high school partnerships with schools in their district would be severely impacted, and students may be encouraged to pursue higher education elsewhere.

Misty Middleton, superintendent of Bellevue Independent School District and incoming NKCES president, made certain to point out that approximately 50% of students in the NKCES region attend NKU, which is due in large part to these partnerships.

“If NKU chooses to be a charter school authorizer, this partnership will suffer, and we will have no choice but to work with other universities. Strong partnerships with your public schools equal enrollment for your university,” said Middleton.

This ultimatum comes as NKU experienced $5 million of its $18.6 million budget deficit due to declining enrollment.

Middleton also said a lack of choice is not the issue, as there are 148 public and private schools in Campbell, Kenton and Boone counties. Kentucky law allows parents to have the liberty to choose which school they want their child to attend through the open borders legislation.

“Choice is not a legitimate reason in the Northern Kentucky region, which causes us to wonder what is the real reason individuals are pushing for a charter school,” the superintendent said.

Farrar said at the end of the day, there is simply too much uncertainty regarding logistics and funding for NKU’s involvement to be a wise decision.

National Alliance for Public Charter Schools President and CEO Nina Rees spoke with The Northerner, saying the possibility of the university becoming an authorizer should be considered exciting and a great opportunity. Rees said universities are ideal responsible parties because they are “less political” than local school districts and are more familiar with the pipeline of a student to higher education.

Rees recognized that becoming an authorizer is not to be taken lightly and is a great fiduciary and moral responsibility. It is important for NKU to seize this opportunity rather than local school districts, Rees remarked, because school districts are often not as motivated to be involved and may see charter schools as competition.

Charter schools are necessary according to the National Alliance because the one-size-fits-all model does not always address student needs. Parents would like more options that fit their student’s needs, whether that be more STEM or classical-focused curriculum or arts and culture-focused. Rees mentioned some charter schools in Ohio that have had success which Kentucky can model after, including Thomas B. Fordham Institute. This institute, which is authorized by the Fordham Foundation, has met many mixed reviews and controversies, however.

“[Kentucky] has the advantage of learning from 30 years of experience in other states,” Rees said.

If NKU approves the authorizer role, the success of charter schools will depend on its connection with families and the support of the community, the CEO said. A key accountability measure will be if the school can attract families as well as perform well.

“It’s an honor to be involved in this enterprise, and I hope that the university decides to take advantage of this opportunity and open some of the first and hopefully some of the best charter schools in the state,” Rees said.

Chair Boehne recognized that people on all sides of the issue are passionate and empowered by their position. He hopes that no matter the outcome, both sides can recognize how thoroughly the board approached their decision.

Ultimately, Boehne said, the decision reflects the Board of Regents and not the university as a whole, and the impacts which may or may not follow will be held responsible solely by the board.

The public Board of Regents meeting will be held on Tuesday, Dec. 13 at 11 a.m. in SU 107A. It can also be attended via livestream at this link.


The Northerner • Copyright 2023 • FLEX WordPress Theme by SNO • Log in