‘Who are we?’ NKU Faculty Senate releases statements urging transparency, inclusion amid transitions

NKU Faculty Senate released three official statements to the Board of Regents, faculty members and The Northerner to make their priorities known as university changes approach 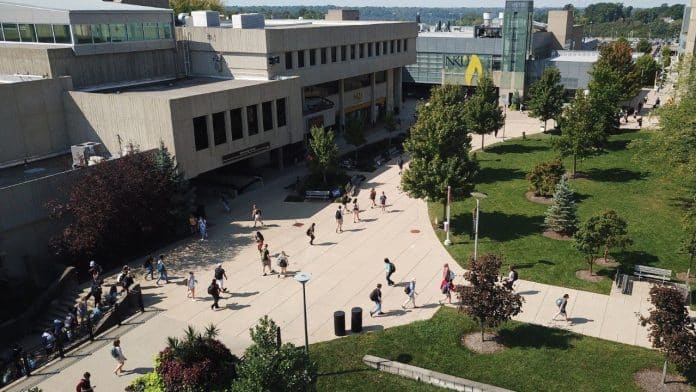 NKU should decline the authorization of charter schools, consider faculty principles in its budget Repositioning Plan and conduct an open presidential search, according to statements released by NKU’s Faculty Senate.

The faculty body released three detailed statements recognizing their priorities at their Nov. 29 meeting which have been shared with the Board of Regents, all faculty members and some media publications. Faculty Senate President John Farrar said the group sought to give their input about changes that largely affect their members.

There are two things Farrar wants the Board of Regents to hear: faculty are here long term through the good and the bad, and, if faculty are at the core of the university, they should be included in decisions that impact the university.

“Really the identity and our mission and our values of NKU ought to be coming from the faculty. What are our core values? Student success, being student ready, diversity, equity, inclusion. Those kinds of things have to be at the forefront when we’re making decisions,” Farrar said.

Feelings of anger, concern and tension are swarming among Faculty Senate members, according to Professional Concerns executive member Kathleen Fuegen, because of the level of uncertainty surrounding upcoming changes. Fuegen emphasized the idea of collegial governance—that colleagues at a university “communicate candidly, openly, frequently with each other about academic matters” so as to reduce animosity.

The full statements from the governing body are enclosed at the end of the article. The issues of the budget deficit and search for a new president from the Faculty Senate are explored in the following. The Northerner is continuing developments on the charter school authorization statement.

When it comes to the $18.7 million budget shortfall, faculty are seeking answers. Included in their statement regarding the deficit, the organization wrote, “A full accounting and examination of the causes of this current budget challenge, as well as the decisions that led to those causes, must be reported to the faculty and the rest of the campus community.”

Board of Regents Chair Rich Boehne said at this point most of the reasons for the $18.7 million surprise are well-known and understood. The board is focused on why surprises happen and potential systems and processes to try to reduce the opportunity for such occurrences, he said.

Farrar said the faculty group has an issue with the way they were communicated with prior to the beginning of the fall semester.

“The communication in August was, you know, everything’s hunky dory. And then we get hammered with this. ‘Oh well actually we don’t have money and we’ve got to do budget cuts,’” Farrar said.

Faculty seek to do what they do best—interact with students through teaching, research and service, the president said. They rely on those in higher leadership, though, to take care of what they’re supposed to do best—like the budget. Trust and morale is impacted when administration doesn’t take care of their responsibilities.

“Faculty members are getting the short end of the stick due to someone else’s mistake,” Phillips said. “It reflects the school as an institution because the more faculty [cuts], the less funding is given to teaching, the less minors, majors, classes are going to be offered, the less opportunities for students.”

In the statement, the Faculty Senate remarked, “The impact on faculty positions should be minimized to the extent possible.”

Chair Boehne said the board will consider the statements and input from all facets of campus not only this year but in later years to come.

“Any information that is offered ends up being part of the process and thrown into the stew as final plans are created,” Boehne said.

During the hiring of current president Ashish Vaidya, the university conducted a closed search, meaning the only individuals who were able to interact with candidates and weigh in on the ultimate decision were those on the hiring committee. Chair Boehne said this hiring committee consisted of around 26 people. The board chair recognized this process did not go over well with faculty at the time.

In all presidential searches prior to Vaidya’s, the university made the campus community aware of finalists and allowed faculty, students and community members to meet and interact with their potential future president.

Chair Boehne said conducting an open search can reduce the quality of candidates because those who are interested in the job would have to make their current employer aware of their interest.

The senate responded that they are not asking for a totally open search where every person who expresses interest must be known, but that when maybe three or four finalists are chosen, they would be presented to the campus. Fuegen said that the quality of the decision would be improved if multiple voices are heard, not just 26.

“Why would we have 15,000 students, 600 faculty, 500-600 staff—why would we have all these people who could join together and vet this candidate before we hire them,” Farrar questioned. “Why wouldn’t we use that resource and make sure that we don’t make a mistake?”

Farrar also argued that if a finalist isn’t willing to be open once they reach the top stage of the hiring process, he/she probably isn’t someone the university wants as a president.

“We can’t get to the point where we’re making an offer to a president, particularly somebody that we’re going to pay—the package is $600,000 a year which is obscene—that says ‘Well I’m not interested in your job because you’re going to make me sit through an open interview.’”

The board does not yet know what decision they will make about the presidential hiring process, Boehne said, but they will spend time talking with the faculty senate and understanding all perspectives.

Chair Boehne said he is appreciative of the priorities included in the Faculty Senate statements, but there was nothing new or surprising that wasn’t already part of the board’s discussions.

Farrar said while the senate was glad to give their input, what truly matters is implementation, as the Dec. 13 Board of Regents meeting which will decide the fate of NKU’s role in charter schools fast approaches.

“This stress, anger and uncertainty is not going to last forever,” Fuegen said. “But throughout it all, the faculty remain committed to the success of students.”


The Northerner • Copyright 2023 • FLEX WordPress Theme by SNO • Log in