Former senators recount their time in SGA: “I felt like I was walking on eggshells” 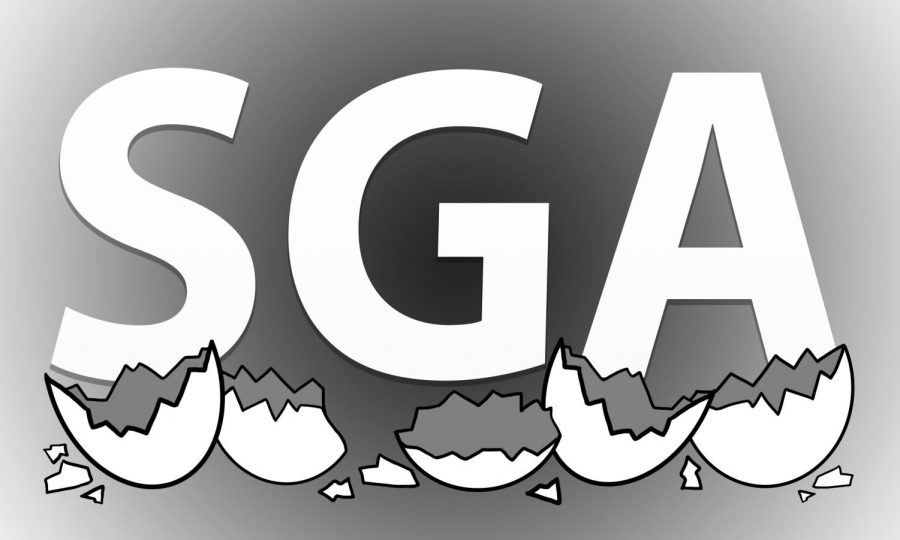 Editor’s Note: The Northerner reached out to all SGA senators that resigned for this story. Emily Miller declined to be interviewed. Ronald Delgado and Hannah Miller did not respond to interview requests.

Prior to SGA’s suspension for the remainder of the spring semester, five senators announced their resignations from the organization, citing various concerns around its environment. Former SGA senators El Goebel and Xavier Sullivan spoke with The Northerner about why they resigned from the organization.

Walking on eggshells is how El Goebel describes their experience in SGA.

Goebel, freshman integrative studies major, joined SGA in their first semester of college and said the environment began as “nice and welcoming.” However, in March, with only a few months left in their term, they announced their resignation via Twitter, citing a lack of transparency and accountability within SGA leadership and a severely negative impact on their mental health.

Up until that Twitter post, Goebel said they began to feel an overwhelming sense of dread and anxiety toward SGA that eventually peaked.

“To be honest, it was just kind of steadily rising, and then it just reached a point where I was like, ‘I feel stressed out coming to these meetings. I feel nervous. I feel on edge,’” Goebel said.

Their discomfort in SGA began in the aftermath of a white supermacist group canvassing NKU’s campus. SGA released a statement condemning the incident, but, in Goebel’s perspective, the organization was not doing enough in response.

“In this instance, the senate is predominantly white, and I felt like that played a role in how people viewed the severity of this. I felt like there wasn’t as much of a focus on like ‘hey, this was an attack on people with color,’” Goebel said. “And so I don’t feel like there was a personal connection to that in terms of how people were sharing their story, sharing how racism has happened on campus, and why SGA needs to take a stronger stance [and] needs to do better. I didn’t feel like that was acknowledged enough.”

According to Goebel, tension within SGA heightened when President Lauren Goodwin faced an impeachment trial over some of her actions as president. The impeachment proposal failed, with an 11-10 vote that divided the senate.

Goebel said that division remained a part of SGA as the organization fractured into factions.

“Much like our national political system, it was so divided,” Goebel said. “With certain people, I felt like I was walking on eggshells, especially after certain comments were made—like the assertion that people were petty and butthurt [after the impeachment proposal].”

According to Goebel, senate members were no longer working as a united front following the impeachment proposal.

“It just felt like it was very isolating based on how whichever way you voted, from my perspective, as a senator, it just felt more isolated and like groups—not exactly cliques—but groups were formed,” Goebel said. “And again, that shouldn’t be happening when we’re all working towards a common goal together.”

At the time, Goebel said they felt like they always had to watch what they said and did within the organization in fear of being reprimanded or their actions being used against them.

In addition, Goebel alleged that they later discovered some things that were happening “behind closed doors” that they felt, as a senator, they should have known about directly.

“I know that there was stuff happening behind the scenes, but I don’t know what that was,” Goebel said. “And the fact that I don’t know is what’s concerning to me about that.”

On March 15, former chairman Ronald Delgado and former secretary Emily Miller, who were members of the executive board, resigned in emails addressed to Goodwin and shared with the rest of the senate. These emails alleged that Goodwin allowed disrespectful comments targeted at Delgado and Miller to be shared during an executive board meeting in their absence.

In the SGA meeting after their resignations, Goodwin denied the allegations made against her.

These emails, and Goodwin’s response, were the final straw for Goebel.

“I just personally felt like that was not enough just to deny them. They were not given the weight—because again, whether they’re true or not, that’s not the main point. The point is they were made, and you need to address them. And I felt like they were not addressed well enough,” Goebel said.

Delgado and Miller’s resignations, which both mentioned SGA’s negative impact on their mental health, also struck a chord within Goebel, who said it made them feel “less alone” to know that other senators were feeling overwhelmed by SGA.

“It just felt like there was a lot of tension between many different facets within the organization,” Goebel said. “My stress levels just rose to a point, I was just like, ‘I don’t know how much more of this I can take.’”

While Goebel initially believed that they were just overwhelmed due to the amount of organizations they were involved in, they said they eventually realized that it was the environment of SGA that was directly causing them to have extreme stress.

According to Goebel, the current administration is not solely responsible for the environment of SGA; rather, the organization has historically had a disconnect between the senators and student body and lack of accountability in its system. Goebel said they have heard students of color cite “a lack of a welcoming environment” as to why they have never tried to be a part of SGA, which hurts the organization by not being as representative of the overall student body.

“There’s a history of a lack of accountability in multiple forms. There are definitely people in the organization—and this is generally speaking—that don’t necessarily help it, but I don’t think that that’s the center of the problem. That’s not the crux of it,” Goebel said. “I would very much hesitate to say any one specific person [or] any one group of people is to blame for any of it. I think it’s the structure, the history, the system.”

Ultimately, Goebel said they did have some positive experiences in SGA, such as making long-term friends and pushing through important resolutions.

“It’s a good thing to look at in terms of having your voice heard, making a difference. The environment is something to be aware of and it wasn’t a good fit for me, personally. That doesn’t mean it’s not a good fit for other people,” Goebel said.

They hope that more people will join SGA with the intent of fixing its intrinsic problems so that the organization can be a healthy, representative body of government.

Senior social work major Xavier Sullivan was in SGA for two semesters before resigning via Twitter this month. Sullivan said they resigned for a multitude of reasons, including an SGA senator accusing them of supporting white supremacy and misgendering them.

Sullivan said they began receiving these remarks shortly after voting no during the failed impeachment of SGA President Lauren Goodwin.

“I voted no [to the impeachment] but afterwards I was talking with two senators that voted yes and no. They were just sitting around, looking around, because they needed to decompress and I had another senator who was very passionate about the impeachment, who came up to me and basically said that I supported white supremacy, misgendered me three times … my other senator had to correct them because I’m non-binary,” Sullivan said.

Sullivan said their race was put into question by the other senator.

“[They] proceeded to question my race, which I’m biracial, and basically it just kind of questioned my whole identity,” Sullivan said.

Sullivan did not feel comfortable being in SGA after the incident.

“That senator may be really thinking they’re doing the right thing, but really they just damaged me and kind of just damaged how I felt about the whole organization … I just didn’t feel comfortable or safe,” Sullivan said.

Sullivan said they reached out to President Goodwin and Vice President Mia Derks about the incident, in which they were understanding of Sullivan’s reasoning for resignation.

“They asked me if they could do anything, if I wanted to report it or anything, but I just kind of wanted to get away with it because I’m graduating,” Sullivan said.

Prior to their resignation, Sullivan said that they tried working on a resolution with Senator Jimmy Renton that would hold SGA accountable by the student body, but the resolution did not get worked on due to how members felt after the impeachment trial was held.

“It kind of just failed before it could even take off, and I just kind of realized that a lot of it is kind of dramatic in SGA, and regardless of what we try to do, it’s not going to be productive because everyone’s just going to have resentment toward each other,” Sullivan said.

Sullivan described the culture of SGA as “toxic.”

“I think people don’t have the opportunity to get to know each other because [of] the whole COVID restrictions, so it’s easier to tear someone down if you don’t know each other, and feel like it’s more like us against them and not see their humanity. So I would say it’s pretty toxic,” Sullivan added.

Going into SGA, Sullivan thought the organization would focus on serving the student body but felt as if members cared about the connections that could be made instead after joining.

Sullivan said as a social work major, they truly wanted to make a difference throughout SGA and help people.

“I don’t really care about the connections. If I can help people, I want to help people. So it kinda demoralized me a little bit because I want to make a difference,” they said.

“The organization itself is supposed to represent the student body, but the people that are currently in are trying to push agendas for themselves or basically lead, but not follow,” Sullivan said.

Sullivan added that SGA needs members that are willing to both lead and follow.

Advice that Sullivan would give to those who are interested in SGA is to be more focused on representing the student body instead of themselves.

“Yes, we are students; yes, you have homework to do; yes, we have a whole bunch of responsibilities … but you just kind of have to ask yourself, are you here just to put it on your resume or are you here to make a difference in school?” Sullivan asked.

Sullivan said future SGA administrations need to implement the change that they promise during their campaigns.

Sullivan said implementing change throughout the organization could start with passing a resolution that would require all SGA members to attend events that represent the Black and Latinx communities.

“We need people who are willing to go out there and do that [representing different communities] while taking care of all the responsibility,” Sullivan added.