Read the full articles of impeachment at the bottom 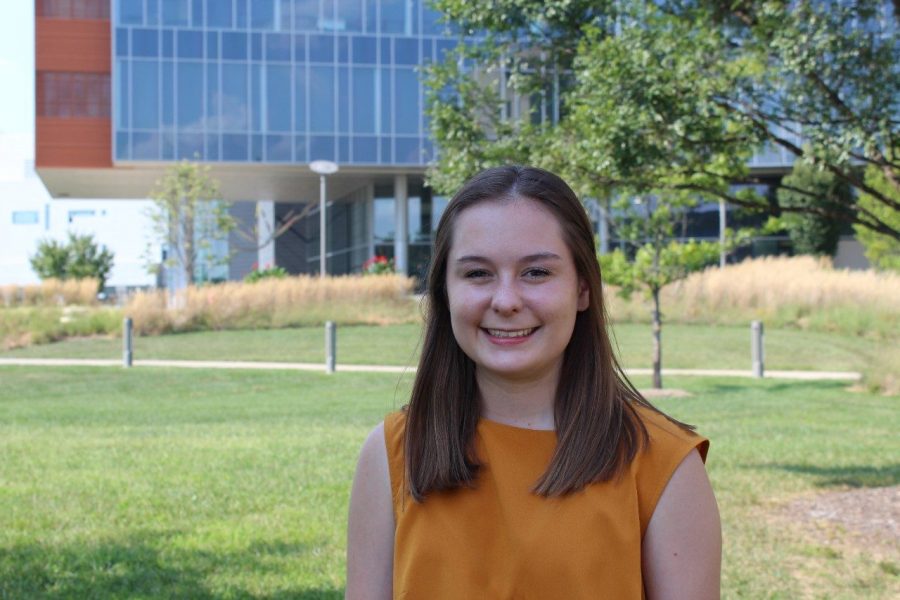 SGA voted to impeach President Lauren Goodwin alleging she violated the SGA constitution. 11 people voted for the impeachment and 10 people voted against it. The vote failed, however, as it required a supermajority—14 votes—to pass.

The Student Governance room in the Student Union was filled at the maximum capacity of 42 people during SGA’s Monday meeting where President Lauren Goodwin was presented a petition for her impeachment.

Students attended the meeting as well as Dr. Eddie Howard, vice president of student affairs. Students sat outside the room and listened due to the capacity being full.

The efforts to impeach Goodwin were put forth at the very beginning of the meeting by Senator Karla Arango, who said she wanted the new business to be moved to the top of the agenda.

Senator James “Jimmy” Renton proposed a motion to introduce a petition for the impeachment of Goodwin.

Renton cited SGA’s Constitution in which he stated that Goodwin had violated numerous rules.

“[And] whereas this petition asserts that President Goodwin has both neglected her duties as President of the Student Government Association, and has committed numerous acts that have brought this right into the student body,” Renton read.

The petition stated that Goodwin had violated numerous rules, including failing to enforce provisions of the Constitution and mandates, denying applicants that were approved by all members of the interview committee, and violating her own executive order by allowing general body members in her office space during office hours.

Goodwin responded to Renton’s motion to introduce the petition for impeachment by stating that the Judicial Council was not brought into this process.

“Senators do not interpret violations of the constitution; that is what the Judicial Council is for and they have been severely underused this year. So, this would have been a good use for their time,” Goodwin replied.

“It does not explicitly state that no one has to be in the office; merely it regulates that general body members will not be doing their office hours in the office. So, yes, I did have my sister who is a senator in my office a couple times to eat lunch with me, not during her office hours. Therefore, there was no violation of that executive order either,” Goodwin said.

The impeachment article states that the violation of President Goodwin’s own executive order “does multilateral damage” and “puts into question the stability of both the Constitution and the Bylaws of the Student Senate, both of which address executive orders”.

The petition read that Goodwin violated the constitution by denying applicants for SGA’s senate. According to the constitution, the number of senate vacancies must be filled if the number of vacancies falls under 25. At the time, there were only 21 senators when the decision was made to deny an applicant. Goodwin replied that SGA presently has 25 senators, therefore making her innocent of violating that rule.

Goodwin said she does not see how she has broken her “constitutional duty.”

“I gave up my entire summer with at least one meeting a day for [the COVID-19 Preparedness Team], usually more meetings a day. I still continue to sit in the [COVID-19 Preparedness Team] meeting three days a week. I’ve served as the NKU Representative on the Board of Student Body Presidents, another constitutional duty. And you can keep going down the list, but I fail to see how any of the things that aforementioned I broke my constitutional duty,” Goodwin said.

The floor then was open to discussion under Robert’s Rules of Order both for and against the impeachment of Goodwin. Time was limited to 15 minutes per session and three minutes per individual speaker.

Arango opened up the discussion for the impeachment of Goodwin by reading the rest of the petition for impeachment.

“[But] the example that will be highlighted in this petition concerns a rejection of the applicants in the latest round of appointments. And whereas President Goodwin denied one applicant from coming before the student body as mentioned previously in this petition for reasons she described at the Feb. 1 meeting of the SGA general body as, ‘personal concerns,’ which not only poses the question for her ability to make objective decisions but also discredits the student body by denying an applicant due to personal problems,” Arango read.

Goodwin, later on, replied saying that her relationship with Chief Justice Cleary does not affect his duties to interpret the constitution and that there are three other capable justices to go to.

If members do not feel comfortable going to members of the Judicial Committee, they can then turn to Arnie Slaughter, Dean of Students and then Dr. Eddie Howard, Vice President of Student Affairs while following the correct process.

Cleary said that the impeachment situation could have been avoided if that process was followed.

The discussion then turned to the recent acts of white supremacist vandalism that occurred on campus on Jan. 27.

Senator Aliya Cannon asked Goodwin if she could speak about the vandalism that occurred.

“I think it was disgusting. I don’t think anyone in this room, or hopefully on this campus, thinks that what happened was okay. I think that that hurt so many students in our community, myself included, because it hurt you,” Goodwin said.

Goodwin said that she is making an effort to fix this issue by wanting to make SGA more diverse to ensure that everyone’s voices are heard and that the issue of lack of diversity and feeling unsafe on campus due to those acts of white supremacy be fixed.

“I need you guys to give me more than a week to do that because we’re looking at a 50-year institution-wide problem that I cannot solve in a week, but I’m trying, because, literally, I can’t express to you how disgusted I was by what happened,” Goodwin said.

During the 15 minutes of speaking against the impeachment of Goodwin, Vice President Mia Derks spoke about the constitutional duties that Goodwin has fulfilled.

Derks said that Goodwin devoted her summer to ensure that the campus would be a better place for all students.

“Lauren has worked all day, every day since her presidency began because that is her first priority and has been, to serve our students, to make their voices heard and to care about our students. That has been her entire job for the past year; she has done a fantastic job of that, and she has fulfilled all of her constitutional duties in good faith, as someone who wants to serve our body to make it a better place,” Derks said.

Senator Kaitlin Minniefield spoke up about the ongoing diversity issue prevalent throughout SGA.

“What have you done that will unite our student body besides sit in our faces and perform and act? You sat in my face, upstairs in your office, and put on a performance. And when I left, you said, ‘and scene.’ We do not tolerate that here on our campus and we pledge to be inclusive and diverse. We need to diversify our senate first before we can do anything. We need to diversify our E-board,” Minniefield said.

Goodwin replied saying that every person of color who applied for a position on the E-board received a position beside one due to a grade situation.

Secretary Stephen Cordle spoke out and said that he did not hear any grounds of impeachment due to constitutional violations.

SGA members then motioned Robert’s Rules of Order to be suspended, where any individuals (including outside students) could speak at the meeting for two individual minutes within a total of 15 minutes.

Chris Roat, the one person that was denied to become a member of SGA, spoke out against Secretary Cordle at the meeting.

“I don’t believe we should be calling women of color for speaking their mind petty and butthurt,” Roat said.

“I agree that there should be constitutional grounds for impeachment, but it is the way, Lauren, that you are responding to people trying to express their concerns as students on this campus that you’re trying to serve. You say that you cannot fix these problems within a week; you have been president since April, these are the problems that have been on this campus for the last 51 years that we have been a university … This is something you should have strategized about when you were planning to run,” Wesson said.

After students and members finished speaking their thoughts and concerns regarding Goodwin, there was a motion to open the floor to vote.

The meeting then concluded with normal business.