The letter was sent out to the university community on Feb. 27. 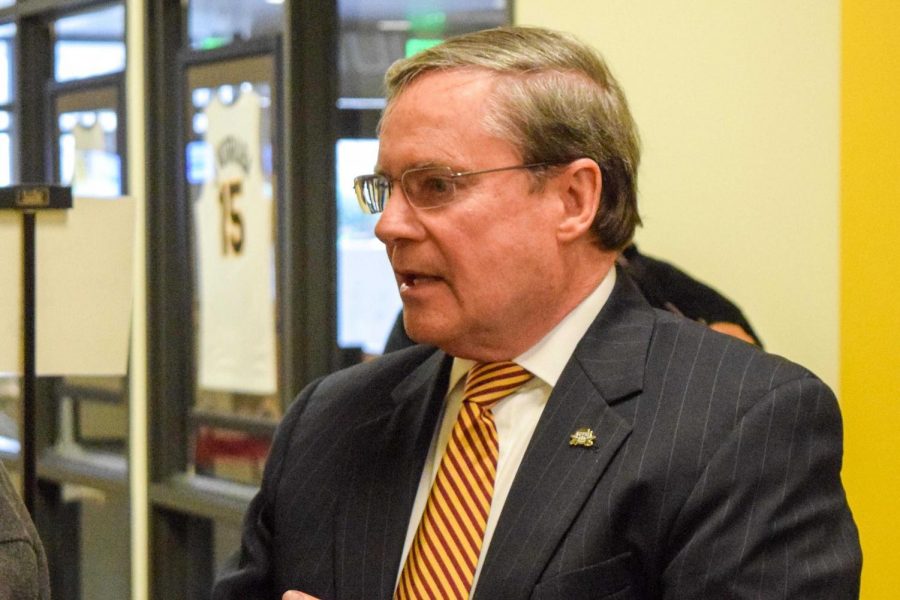 In response to media coverage of former Chase Dean Jeffery Standen’s departure, Interim President Gerard St. Amand sent a letter to the campus community to clarify information regarding the case.

Standen resigned in December after a university investigation revealed that he violated NKU’s Values and Ethical Responsibilities policy. Complainants said Standen created a culture of fear and intimidation in his office. Two former students and an employee complained of sexual harassment.

NKU Director of Public Relations Anna Wright said the university acted “swiftly” to begin the investigation before the three women submitted testimonials on the case.

“As a leader of this university and as former dean and faculty member of the Chase College of Law, I care deeply about our law school, our students, our staff and faculty, and the community we serve,” Amand stated in the letter, saying that in recent days misinformation and rumors have spread through NKU and beyond about Standen remaining at the university as a tenured professor .

“This all started when a concern about the dean’s conduct in his office, described as possible sexual harassment, bullying, or abusive leadership, was reported to the Provost,” the letter continued. “Based on this report, the Provost appropriately and immediately consulted with our Human Resources staff.”

An inquiry by the Director of Employee Relations and Equal Employment Opportunity, Rachel Green, was immediately initiated.  Three individuals, two former NKU student workers and one campus employee, were complainants during the inquiry. According to Amand’s message, the NKU employee was interviewed from the start of the process. The other two, former students, did not contact them directly from the beginning.

Later, another six were interviewed as witnesses for the case.

Instead, the first direct contact was through an intermediary (a lawyer and law professor), which went straight to St. Amand during the timeframe of the original inquiry.

“I advised the intermediary that if these individuals had information relevant to this inquiry, we needed them to come forward, and I recommended the intermediary have them contact our lead investigator in the Human Resources Office,” the letter said.

The three individuals, according to letter, were concerned about their privacy, which the investigation team worked to respect as much as possible while taking the statements.

The investigator reached out to Ann James, the senior associate dean of students and director of conduct, rights and advocacy, to assist. Then, Sue Ott Rowlands, the provost, placed Standen on administrative leave in order to remove him from office during the investigation.

RELATED: ‘You have to be better than this, NKU:’ students react to investigation of Chase dean

“During this investigation, the dean was provided an opportunity to learn of the complaints and to provide his response,” the letter said.  “He denied many of the specific claims and admitted some actions, but characterized many of them much differently than the complainants.”

According to documents obtained by The Northerner, the following information was disputed:

These actions were undisputed:

“Based on the facts obtained during the investigation and the legal and personnel advice she received, her conclusions are fully supportable,” the letter read.

Soon after this decision, the dean made his resignation official, which the provost accepted as in the best interest of both Chase Law School and the university. He will not return to his leadership role at the law school, the letter stated.

But, the dean was not only appointed as a dean, but as a tenured professor as well.

“Although the dean’s appointment may be terminated at the discretion of the Provost, that is not the case with the tenured faculty appointment,” the letter reads. “The evidence from our inquiry was found not to rise to the level to support immediate termination of his employment as a tenured faculty member.”

So, Standen has the opportunity to return for the fall semester as a faculty member.

“As you consider what information we have shared regarding this matter, understand that our practice in all personnel matters is to ensure our ability to conduct a thorough and unbiased investigation and to protect privacy rights of people involved,” the letter read, adding that confidentiality is essential for an unbiased investigation.

Amand said that complainants were upset upon learning that “the media was examining this matter when they contacted us to plead that [the university] preserve their privacy.”

“Our responses to the media’s open records requests were designed to do just that,” he wrote.  “We sincerely trust that we have succeeded in doing so in the face of significant pressure to release more details.”

In closing, he said that all members of NKU must “engage in honest, fair and ethical behavior.”

Integrity should be at the heart of every action, he added.

“Only if each one of us comes forward when there are such matters to be addressed can we ensure the appropriate response by the university,” he signed off. “One such resource is the NKU Ethics and Compliance Hotline which is available 24 hours a day, 7 days a week, 365 days a year. Reports can be made anonymously at 1-855-597-4539 or www.nku.ethicspoint.com.”