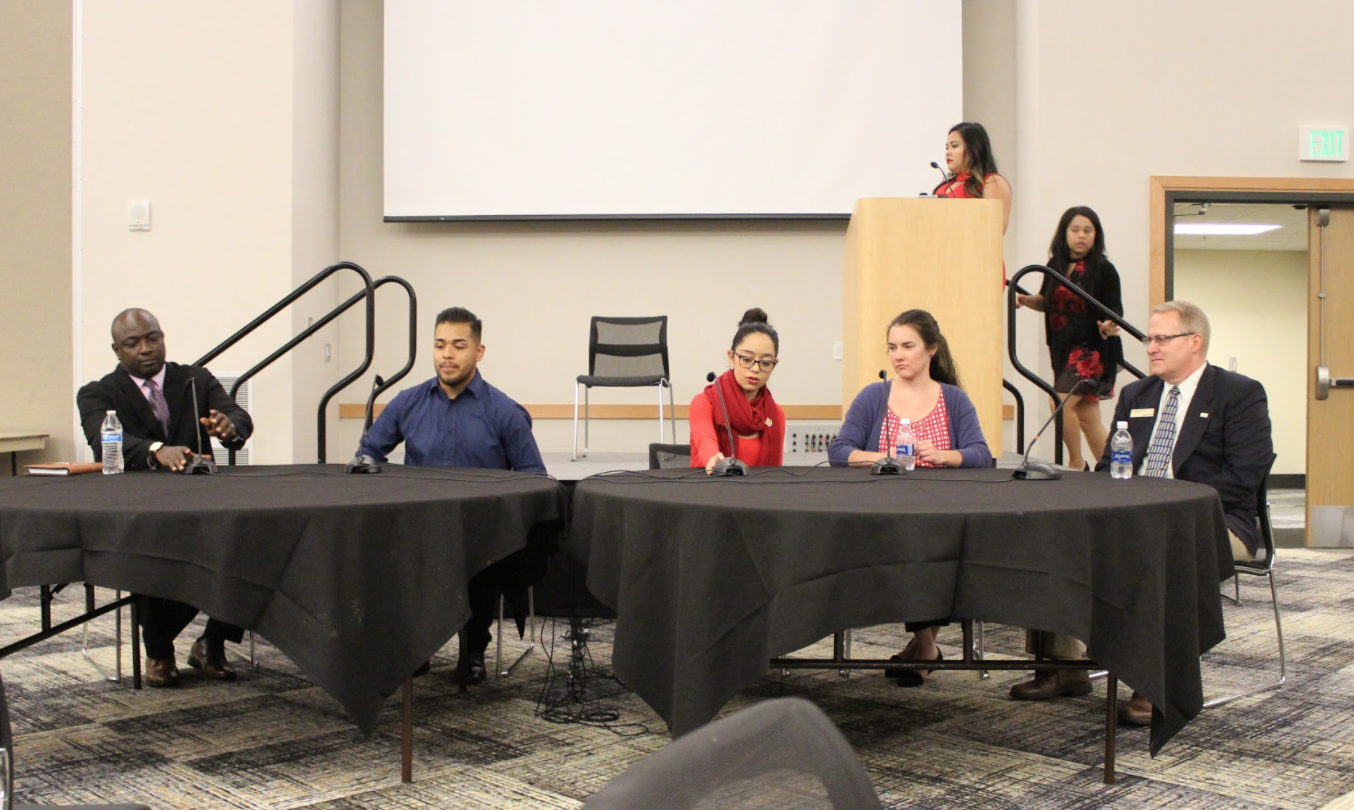 The Student Government Association hosted a town hall meeting where students could voice concerns about immigration policy to a panel of experts and students in the SU ballroom on Thursday night.

DACA: What you need to know

DACA, or Deferred Action of Childhood Arrivals, grants work permits and stalls deportation of undocumented individuals that came to the U.S. as children. Recipients, also known as “Dreamers,” are required to renew their applications every two years.

According to U.S. Citizenship and Immigration Services, over 900,000 individuals have been approved for DACA since the Obama administration enacted it in 2012.

Okpe said that DACA was not meant to be a permanent fix for America’s immigration system.

“DACA is not a lawful status, it is deferred action,” Okpe said. “It’s ‘ok, we’ll come back to you later.’ In the meantime, you can get authorization to work.”

“The program has enabled a whole huge group between 600,000 and 800,000 individuals with the ability to come out of the shadows and live a normal, more secure life, and now that is being taken away,” Herre said. “The biggest issue is that as of March 5, there are going to be an estimated 14,000 individuals losing their work authorization every week. That’s going to have an impact on our economy.”

To replace DACA, Herre referenced the Dream Act of 2017, introduced in the Senate months before Trump rescinded DACA.

If approved, the act would require the Dept. of Homeland Security “to authorize the cancellation of removal and adjustment of status of certain individuals who are long-term United States residents and who entered the United States as children.”

The bill’s provisions state that those who were present in the U.S. for four continuous years, who were younger than 18 when they arrived and who have not engaged in criminal activity would be eligible for protection.

Until Congress decides on a replacement immigration policy, Okpe cautioned Dreamers against traveling abroad or cross-country, either on airplanes or buses. In addition, he said NKU lawyers can always help students who are confused about their options.

“If you have a problem, come to the law school, talk to the lawyers there. I’m sure there are things that can be done in the sense of going to court to protect your rights or do other things that will make sure that our constitution applies in a humane, fair, and dignified manner,” Okpe said.

Herre reminded students that regardless of immigration status, everyone in the U.S. has the same constitutional rights.

FERPA, or the Family Educational Rights and Privacy Act of 1974, is a federal law which prevents family members and other third parties from accessing student records.

As NKU registrar, Cole is responsible for keeping all official student academic records. Under FERPA, there are specific protocols that must be followed in order to release these records.

Cole said his office deals with “directory information,” such as addresses, phone numbers, majors and graduation dates. He explained that NKU does not keep information about students’ immigration status. While FERPA protects student records, they are not completely private.

“FERPA is good about saying ‘you may do this’ as opposed to ‘you must do this.’ So yes, we can use some discretion,” Cole said. “Conversely, someone could make an open records request to give a list of names of all the students that go here. We would have to comply with that.”

Cole said all students have the option to submit a confidentiality request that would prevent their basic information from being obtained by open records requests.

The letter, signed by nearly 800 college presidents, asks senior congressional leaders to “pass a long-term legislative fix as soon as possible to protect Dreamers, outstanding young people brought to our country as children.”

SGA plans to vote on a DACA solidarity resolution, which aims to establish NKU “as a safe community which fosters a positive learning environment and protects the rights and privacy of all students on campus.”

Town hall organizer and Student Rights Committee Chair Jachelle Sologuren wrote the resolution, which is similar to one she proposed last year. Sologuren said her new resolution for solidarity with Dreamers contains more information about privacy protections under FERPA.

The resolution will go to a vote on Oct. 23.

Oñate, a mentor for the Latino Mentor Program, said a statement from the university showing support for its DACA students is needed.

“Definitely a statement is something that is needed to provide support,” Oñate said. “But words are not enough, and I believe policies that would follow right behind a statement are needed and they are needed urgently.”

Though immigration reform will take place in Congress, the meeting’s panelists agree that NKU students can make a difference, too.

Herre said the best way for concerned students to make a change is to contact congressional representatives and to become educated about the issue.

“Call your representatives and senators, and tell them that you support and that they should support legislation that is benevolent to a group of individuals who through no fault of their own have been put into a very precarious and scary situation,” Herre said.

Okpe said the best way for Dreamers to deal with uncertainty is to continue developing their talents and intellect.

People behind the numbers

SGA senator Brenda Moran, the event’s emcee and president of NKU’s Young Adult Council of the League of Latin American Citizens United, said that even small things are harder for undocumented citizens.

She shared that when her cousin was invited to study in France, Moran’s aunt could not drop him off at the airport.

“My mom had to be the one to drop him off because his mother is undocumented, and she was fearful of going to the airport and dropping off her own son,” Moran said.

Ponce, who was born in Mexico and came to America when he was 5 years old, is now an NKU sophomore and Dreamer. He said he worries for young children who grow up confused about their identity because of their immigration status.

“They are told to follow the American dream, but one day they realize that they might not be able to to do that because they are not American,” Ponce said.

“I will always stand as a Peruvian. Often times we hear America is a melting pot, which is a valid statement, but why should we melt away our traditions and customs?””

SGA senator Allison Vesgas, a former Dreamer who came to the U.S. 14 years ago, said she considers herself a true Peruvian.

“I will always stand as a Peruvian,” she said. “Often times we hear America is a melting pot, which is a valid statement, but why should we melt away our traditions and customs?”

Event organizer and Academic Affairs Committee Chair Janiah Miller said she thinks the town hall succeeded in both informing students and letting them share their thoughts.

“People had strong opinions about what we can do moving forward,” Miller said.

Student body president Sami Dada sent a statement expressing how personal this political issue is to him. Before Dada started 5th grade, his father was deported, and he said the event shaped him into the man he is now.

He stressed the importance of student government’s role in having events like Thursday’s town hall.

“One of our key functions is to protect and promote the rights as well as to advocate in the best interest of all Northern Kentucky University students,” Dada said. “We accomplish these goals by listening to our peers, learning about the problems students face, and taking action to find solutions.”