EDITORIAL: In the mountains, the option to serve 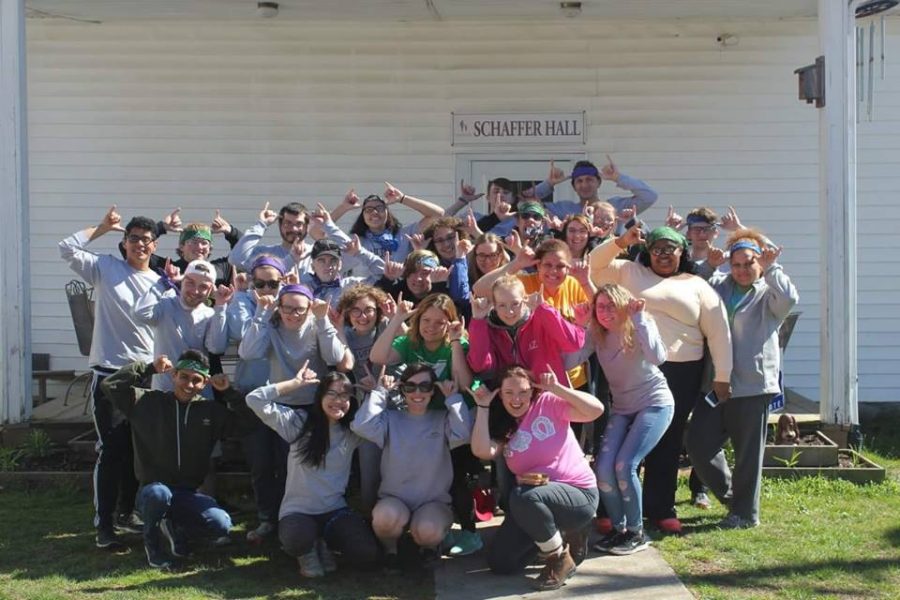 Highways carved into mountains guided three vans of NKU students to the area where the War on Poverty was first declared by Lyndon B. Johnson in 1964. It’s a surreal encounter with a niche culture unlike the one I grew up in, just a few hours away in central Kentucky.

Houses and trailers freckled the landscape, joined by shaded hollows and peaked valleys. A large estate would often be located right next to a string of smaller houses with humbled porches and peeled paint.

Our destination: Hand in Hand ministries, an old schoolhouse turned community service center, in Auxier, KY. The NKLI Empowerment service retreat included 29 of us, from different departments and organizations campuswide. In three groups, we helped in the repair process of three homes, each with its own host of issues–but with the same goal: making the conditions livable for the at-risk families inside.

One house needed a handicap ramp and ditch, another needed floor ripped out and replaced and others shingled and roof and removed two chimneys.

Students Mary Andrikus and Katlyn Vickers co-chaired the three-day long retreat through NKLI, and they worked in multiple facets–not only by organizing, scheduling and PR-ing the event, but acting as family leaders as well.

“Two years as a participant I just go along with what was happening,” Andrikus said.  “Now, as the one who organized it, I can kind of see the background of the retreat and also I can feel how to like, place myself in different roles.”

Appalachia, which technically stretches from the southern tier of New York to northern Alabama, Mississippi and Georgia, named for mountain chain that acts as an barrier for the outside world, is known for its historical and geographical isolation.

It’s also known to be home to some of the poorest counties in America. Of the 30 highest rates of poverty in the entire nation, nine counties are in Eastern Kentucky, as of 2016, according to U.S. Census Bureau estimates.

According to data reports from the Appalachian Regional Commission, only 75.1% residents from the Floyd County (where we volunteered) completed high school from 2011-2015. 12.8% have a completed Bachelor’s degree compared to 86.6% and 43% nationally, respectively. In Appalachian Kentucky, 25.8 percent are in poverty compared to 15.8 percent nationwide, according to the same dataset.

I had never been on a roof.

Before the group–about ten of us–climbed up the ladder, the owners, The McCoys, greeted us. The man gestured at his dog, a yellow lab mix, “His name’s Smiley, ‘cause he makes people smile and he’s always smiling.” (Their other dog, which spent most of the day asleep in a bed of plants, was named Spot).

They had given a few of us coffee–mine inside a mug depicting a cartoon man lounging on a hammock with ‘Retired’ on the bottom–which I gulped down.

The atmosphere was crisp. The sun would later slice through the clouds and warm the flat roof. From it, you could see steep mountain sides, which bordered the backside of the house itself, and the rickety wood-plank bridge that led to the small ranch-style house. It seemed that we were in a valley, trees–some dead, others evergreen, some with the first hints of buds–spotted the mountainside.

And, the roof was damp. A large tarp maintained a portion of the roof. In other places, we ripped up shingles, revealing wetness that caused leaks and water damage, and replaced them with new ones with the help of our site leader, Jackie, also a resident.

We tore down a chimney, as if to perform some strange anger management ritual, soundtracked by a Disney Spotify playlist blaring on one of the member’s phone. By the end of the day, the roof was nearly finished and the problematic chimney  gone.

“I think it’s cool to have an alternative Spring break because, for me personally, I use my time wisely,” Andrikus said. This year was her second experience with the retreat. “ I learn and give back to the community.”

Each situation was different. One group built a ramp for a woman, Barbara so that she could get in and out of her house with ease, despite having a disability.

The other group, who I helped during the second day, visited an 80-year-old man, Columbus,  who lived in a trailer with floors that were beginning to crumble. He had no heat. Parts of the roof were leaking, the porch was in dire shape too.

In a testimony, student and attendee Jasmine Cummins wrote that in helping Barbara she felt like she not only improved someone’s home, but someone’s life as well.

“The crew I had surrounding me were upbeat and energetic,” she wrote, saying that she plans to return next year.  “It felt like that ramp was put up in no time at all. My favorite part about the retreat was the people that I got to work with. It’s so important to built connections within the NKU community.

The experience was eye-opening for student Roberto Amazendes as well, who said he hadn’t realized how bad the poverty was in the area, or that such conditions could exist in the U.S.

“I didn’t think anybody could be that deprived of their basic necessities at home. It was truly sad, but helpful because  it once more helped me value the simple things I have in life,” he wrote in a testimony. “I was able to, through this retreat,  bring joy and hope into not only the people we were helping, but to the people that were making this whole entire operation possible.”

The work on Columbus’ home, where he lives with his 27-year-old son, was far-reaching. Insulation had to be torn out and replaced (including the wooden rafters that hold them in place). A heater was installed. Outside, the ground was muddy. Dogs and cats wandered. Objects piled up on porches and scraps laid about. Just up the hill, a divide existed: brick houses with driveways and new cars parked out front.

As Gail Spradlin, the director of the Auxier center, said during reflection time, those who have money, have money. Those who don’t, don’t.

“The retreat was a real eye opener about what the conditions are really like in Eastern Kentucky and pushing me out of my comfort zone,” student Alexander Taylor wrote in a testimony. “I’m really glad that I went and got to meet a lot of new people but also grow closer to people I already knew.”

Before leaving our sites, one of the construction leaders Joe Sneller, would say that service “Isn’t a hand out, but a hand up.” And, they pushed us to interact with the people we served.

Sitting on a porch, a landline phone in hand, Columbus watched his neighbors. Construction equipment filled the streets, the morning drowsy with rain. A pile of ash covered the ground, where a neighbor’s trailer was burnt to the ground the day before.

He watched his neighbors, and observed workers file in and out of his home–one that stretches back generations in his family. His daughter made it out of this, he said. She went to Morehead College and worked her way through, and now works in a lab at a hospital. He repeated himself: She made it out of this place.

Later, he posed with us for a group photo, holding two thumbs up to the camera, and assured us that if we ever needed anything he could give, he would give it to us.

“I remember, two years what I learned is that Appalachia is a low-income [area],” Andrikus said. “This year, I think I learned more about the Appalachian community. They really value family and relationships.”

For her, working with the site leaders and helping community leaders helped her see beyond their stereotypes, and beyond stigmas. Everyone, she said, is human. And that’s the point.