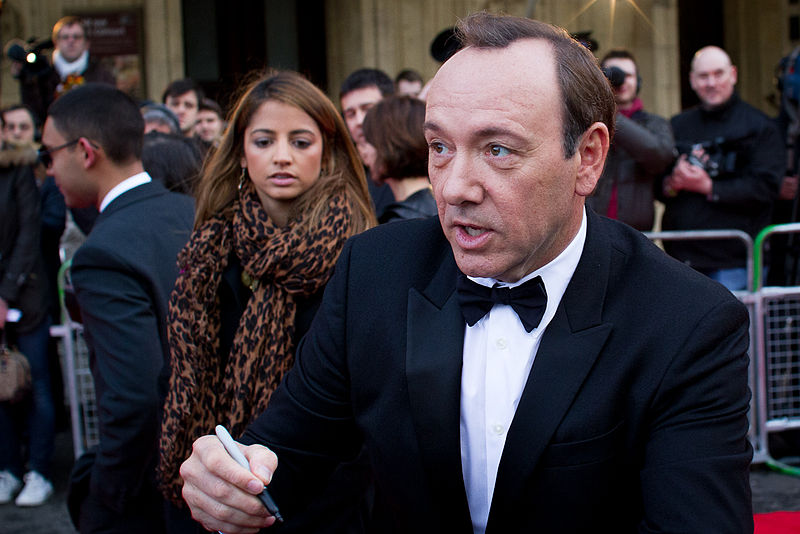 Kevin Spacey in 2011 arriving for the Mikhail Gorbachev 80th birthday concert. This week, several men have come forward with sexual assault allegations about the House of Cards actor.

When the news of Harvey Weinstein first broke, I sat down to write an editorial. Then a rape on NKU’s campus was reported. By the time I was finished with my op-ed, I felt as if the piece was no longer timely. I placed it on a shelf of unfinished work, only for it to come crashing back down with a new page added: Kevin Spacey.

Another one, I thought.

Of course another man in a position of power would prey on, abuse and assault those with less power. How many have used their wealth, status, power to hold fear over another? When do we, as society, stop letting rapists rise to those platforms?

Just this morning–after more men came forward with sexual assault allegations–Kevin Spacey’s publicist told the New York Times that he was “taking the time necessary to seek evaluation and treatment.”

Spacey: how much time was “necessary” for Anthony Rapp to heal when you, 26 at the time, decided to scoop up Rapp, 14, and lay him on your bed after your guests for your party had gone home?

Or do you not remember?

Two words, “Me too,” backdropped in black with bold, white lettering. And another. And another, And another. Virtual fists, raised in the air. A collective moment of recognition–but where’s the end?

Spacey’s Twitter replies flooded with fans mourning the loss of a great actor. But why mourn this loss when Rapp’s trauma can never be un-done?

Why do victims feel afraid to step forward on every college campus? When they walk through a space where they are supposed to feel safe and learn, why do they often feel crippled by anxiety as their perpetrator walks free? Hollywood is only a microcosm of the problem, amplified by platforms of power.

Many fear they won’t be believed or will be called a liar for coming forward. Some don’t report because they’re afraid that their abuser will retaliate. Survivors of sexual and domestic abuse may not feel safe coming forward because of the stigmas that surround the issue. According to the National Sexual Violence Resource Center, the prevalence of false reporting is between 2 to 10 percent (a stat that includes insufficient evidence, inconsistent statements, delayed reporting and victims deciding not to cooperate).

And yet, society’s reaction is often to question rather than to listen to the victim (and society questions, again, why so many take years to come forward).

According to Rainn, 2 out of 3 sexual assault cases go unreported.

There are no excuses for sexual violence: not because the victim is beautiful, or what they were wearing, or they weren’t sober (or because you were drunk and don’t remember it), or they were asking for it, or they originally said yes and later changed their mind, or they were unclear, or you were dating. None.

According to RAINN, 23.1 percent of females and 5.4 percent of males experience rape or sexual assault through physical force, violence or incapacitation. Only 20 percent of female student victims report to law enforcement citing reasons ranging from being fearful, to feeling as if it wasn’t important enough, to not wanting to get the perpetrator in trouble or believing the police wouldn’t be able to help.

Spacey used his apology to come out as gay–a disclosure that many news headlines wrongly focused on rather that the real problem: sexual assault–and because of this, he perpetuated a stigma: that gay men are predisposed to pedophilia

This is false, and to bury one’s allegations under the rainbow not only distracts from the most important aspect of the situation, but also further marginalizes a minority.

According to the Human Rights Campaign, individuals in the LGBTQ community are at a greater risk for sexual assault. Society often fetisisizes and hypersexualizes LGBTQ indivduals, and because of the way gay relationships are stigmatized, it can lead sexual violence, and subsequently, shame, fear and internalized homophobia.

From a young age, women are taught that sexual harassment is to be expected and that one must prepare themselves for the inevitable. We’re gifted with canisters of pepper spray and pocket knives. Throughout girlhood, we’re taught how to dress in order to avoid the “male gaze,” as if our bodies, even in their pre-pubescent form, are sources of shame and a weakness we must shield rather than find strength in.

The list of voices–echoes in social media chambers–are innumerable. They’re both powerful and exhausting in their sheer force. Matching those are another set of “Me, too,” mostly invisible from the digital landscape: the perpetrators.

I should not be exhausted.

I feel deep sadness, anger, discomfort and disappointment–but not surprise. We are given reasons for why these things happen to victims as if the victim could have foretold that they would be violated physically, mentally and emotionally.

Rapists make a choice. Victims do not. For change to begin, those protecting rape culture either knowingly or passively must first stop.

If you’ve been sexually assaulted, resources are available. On campus, you can visit nvp.nku.edu/support.html. Office hours for the Norse Violence Prevention Center are 8:15 a.m. to 4:30 p.m. Victims can also call 800.656.4673 to be connected with a trained staff member of RAINN’s Sexual Assault Hotline. The Women’s Crisis Center, located in Covington, Kentucky, can be reached 24/7 at 800.928.6708. When someone comes forward, listen.