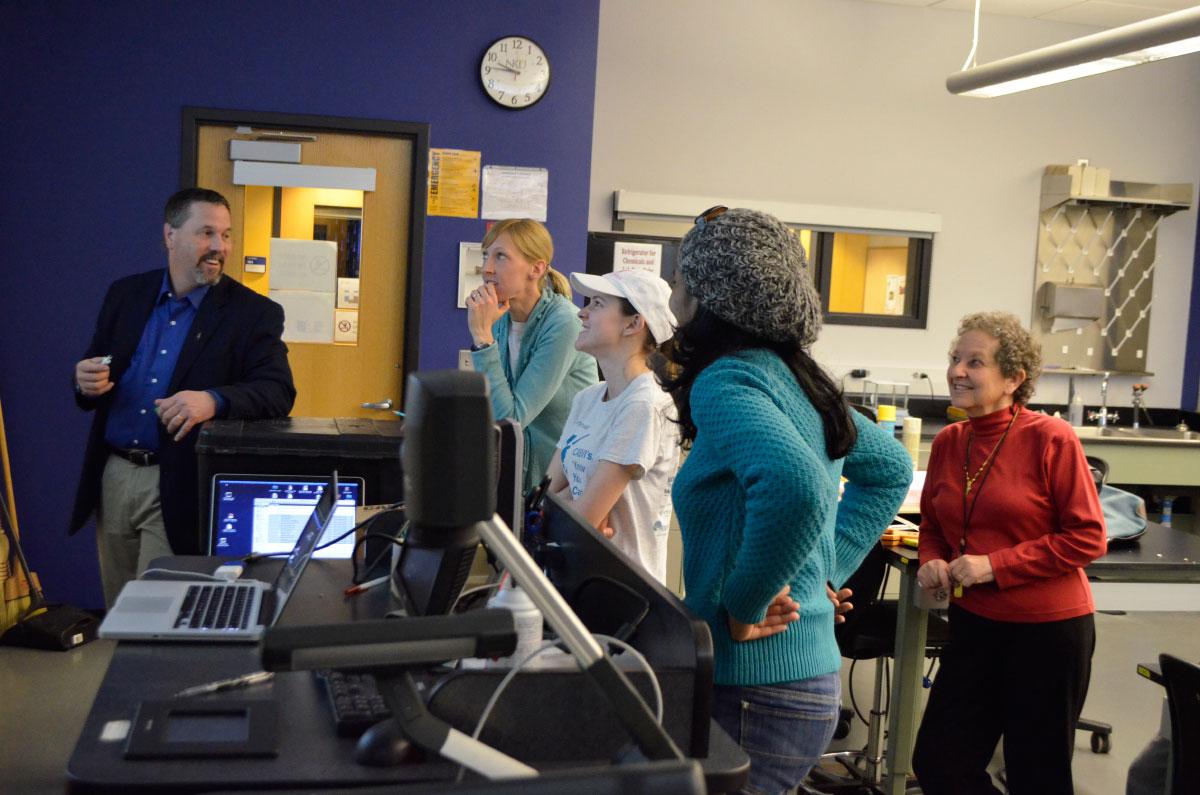 A transdisciplinary group of students and faculty members at NKU have teamed up to create a bilingual app, with hopes that it will be used worldwide by professional and citizen scientists in the near future.

The main goal of this diverse team is to digitally change the way data is collected and studied by making it easier than the technology that is currently available with the new Water Quality Pro app.

According to associate professor Richard D. Durtsche, the Ecological Stewardship Institute (ESI) consists of team members from departments including sciences, arts, humanities and social sciences and technology informatics that work to enhance ecological and environmental literacy and stewardship on our campus, across the region and nation, and to serve as a model of transdisciplinary research.

The Water Quality Pro app is currently being developed, but is not yet in the final stages. It is the descendant of the WaterQuality app, a resource available on iPads, iPhones and the iPod Touch for $4.99, which was created at NKU in 2012 and is still being used today. 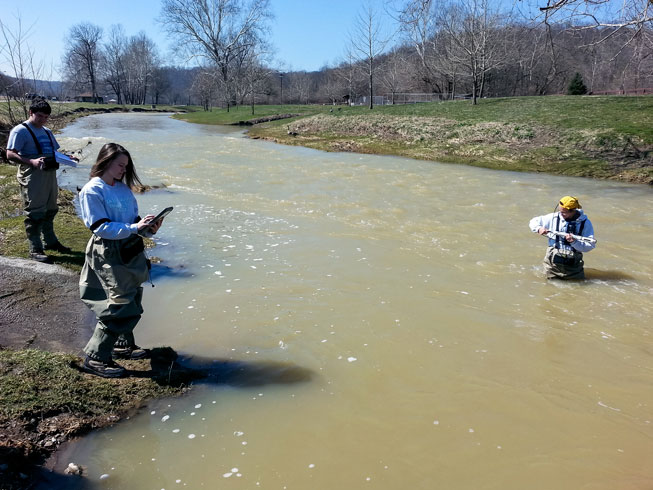 NKU students prepare to sample the water quality in a stream at Pioneer Park in Covington, Ky.

According to River on the Web, which is linked to WaterQuality, “The app includes stream study data collection and information to understand the data that was collected in sections for site profiles, chemical and bacterial sampling and macroinvertebrates.”

In other words, the data collected can instantly be shared to the website for further analyzation and information.

According to Regents Professor Miriam Steinitz Kannan, Water Quality Pro will have its own dedicated website and will probably be able to accept data from apps all around the world.

Need for a new app

“What we have right now is a water quality app that NKU created a couple of years ago, and that was based upon the use for education,” said Julie Moses, senior biology major and team leader of this project. “So, we’d get together with elementary schools and high schools, and we’d show them how to use it.”

But now, there’s become more of a need to monitor watersheds and the Environmental Protection Agency (EPA) is limited. 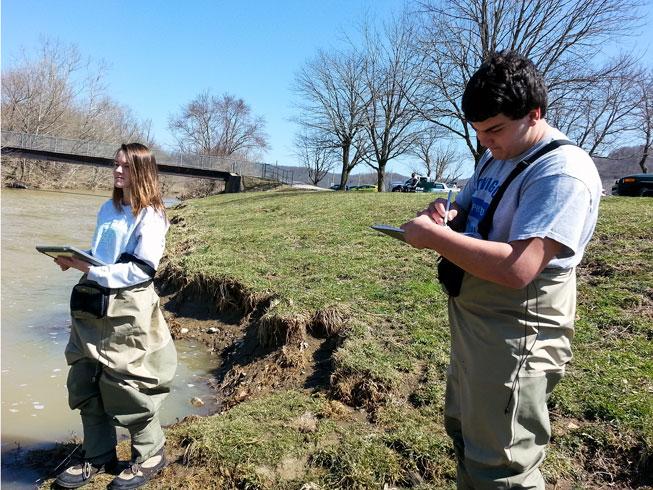 Students upload data into iPads, then are able to analyze stream activity.

“The EPA unfortunately does not have enough people to cover all of the streams that are in the Ohio River watershed,” Moses said. “So, we want to have an app that is more professional.”

Moses said the biggest difference in the WaterQuality app and the new app, is that with the Water Quality Pro, there’s not going to be any room for error.

“We are going to guarantee that the data that anyone puts in there is going to be credible, so that the EPA will want to look at it and use it,” Moses said.

Team member Alexus Rice, a junior biology major, said the new app will have the power to collect data from all over the world. All of the data will be sent to one database so people can view the history to compare patterns or search for problems in streams.

“The EPA only goes out and actually monitors streams once every 14 years,” Rice said. “Environmentally-wise, or ecologically speaking, that is an eternity. Because something can change in a year and completely destroy our water quality.”

After an on-campus meeting with the EPA and a workshop on how technology can be used by citizen scientists, Kannan, and others involved, thought they “could update the app by making it useful, in the sense to make it more credible to professionals.”

“The concern of the EPA was that it wants credible data,” Kannan said. “Sometimes, when a high schooler is getting data, it’s possible for them to misidentify an organism or enter a wrong number.”

The group entered the P3: People, Prosperity and the Planet Student Design Competition for Sustainability and will present a proposal to the EPA April 25-27 in Washington, D.C. If chosen, the team will earn the P3 Award and a $90,000 grant to put into Water Quality Pro.

“The idea of People, Prosperity and Planet, is that the app we’re developing will be of worldwide value, not just regional,” Kannan said.

So far, the faculty in the group has only received a $15,000 grant for Phase I of the project from U.S. EPA as part of the competition.

“If we win that $90,000, we’ll come back here and put it into play and get everything created,” Moses said. “It will take, I believe we had the timeline of about two years, to get everything implemented.”

The new app will have more features that will cater to citizen scientists, who volunteer at streams and do water assessments, as well as professionals, according to Moses.

The most important part to Kannan, is the development of what will be called smart filters, to ensure that the data going into the app is very credible. If someone takes a photo of an organism, the computer can find out how accurate identifications are by detecting the edges.

“So, it’s a little bit like face recognition for bugs,” Kannan joked.

The identification tool is Kannan’s favorite feature on the new app, and she and other students took all of the photos.

“When students go to a stream, they can find an organism,” Kannan said. “By looking at the profiles on the side of the app, they can click on them, view photographs, view a complete life history, water they prefer… and so on.”

Video | 1:23
Faculty and students talk about the ongoing development of Water Quality Pro

The app also gives the user a pollution tolerance index that is calculated automatically. The identification tool can help determine the range levels to determine the type of organisms able to survive in a specific stream, and the general conditions of the stream.

“I don’t know of anything that does that that’s available,” Kannan said. “And the students love it. It’s easy and it really improves the accuracy of I.D.’s.”

Kannan also mentioned the need to make the app compatible with other devices, instead of only Apple products.

“The new one definitely has to be made for Androids because most of the world doesn’t use iPads, they use Androids,” Kannan said. “So, that’s in the front of the plan.”

Another main aspect is to make the app bilingual. The team already has a lot of material in Spanish, but hopes to branch out to other languages as well.