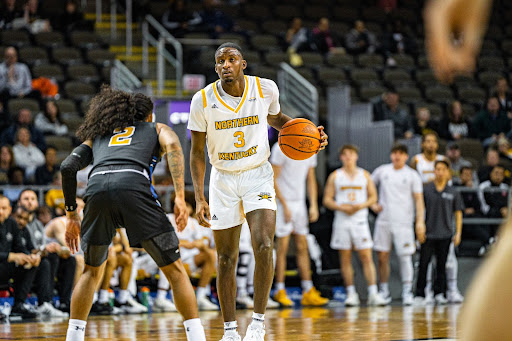 Gallery|4 Photos
Violet Lewis
Marques Warrick surveys the floor as he is defended by Purdue Fort Wayne’s Damian Chong Qui (2) in the first half of NKU’s 74-54 win Saturday night. Warrick led the Norse in scoring for the third consecutive game as the junior guard posted 18 points in the winning effort.

In a battle between the two programs that were picked to win the Horizon League according to the coaches’ preseason polls, the NKU men’s basketball team sailed past the Purdue Fort Wayne Mastodons by a score of 74-54 for their third consecutive win in front of a raucous crowd at Truist Arena.

It was a complete effort all around in the win for the Norse – on the offensive end of the floor, they shot 50.9% from the field as a team and had four players with double figure totals in the points column. A game after his heroic buzzer beater to lift the Norse to a big win over Cleveland State, Marques Warrick led the Norse in points with 18 with Sam Vinson and Trevon Faulkner trailing the junior guard with 17 and 14 respectively.

On defense, NKU held one of the Horizon League’s most lethal scorers in Jarred Godfrey to just eight points on the night and forced 18 turnovers and 10 steals away from the Mastodons.

Norse head coach Darrin Horn said in his postgame press conference that the play and focus on both ends of the floor from his team looked well-honed, even going as far as saying that it was the “most complete game of the year” from his squad.

“After these games when we haven’t played as well as we wanted, or maybe we lost, [we talk about] some of the inconsistency from the team or some of the individuals when we go down the stat sheet,” Horn said. “I don’t think you had that tonight. Everybody contributed within their role the way that we needed to.”

The Mastodons would grab an early 11-7 lead through the first six and a half minutes of play backed by five points from graduate forward Bobby Planutis, but the Norse would swiftly take control afterwards as they went on a 17-2 run over the next eight minutes to take a commanding 11-point lead. Trey Robinson would take the lead scoring-wise as he connected on two three pointers and a layup in the span of a little over a minute as the Norse used the shot clock to their advantage, moving the ball around to get PFW’s defense off-kilter.

“It feels good when we’re knocking down shots at the end of the clock and getting our second and third action,” Robinson said. “It gets the crowd into it too, especially late in the game.”

Purdue Fort Wayne would whittle that lead down to six as they kept Northern scoreless over the course of the final three minutes of the half, but the Norse would come out of the gates swinging in the second. Xavier Rhodes would nail a three-pointer in the opening moments of the half, and after scoring just two points in the first 20 minutes of action, Warrick would tap into his innate scoring ability to go off for seven points in three minutes.

Warrick said that despite his unusually quiet first half, he was confident in his ability to find his spark and contribute scoring-wise for his team in the second.

“There’s been a lot of times where I’ve had a couple of points or even zero in the first half and I would pop off in the second half and lead the team in scoring,” Warrick said. “I just try to stay in that same mindset. The shots weren’t falling in the first half, but I was still confident in my teammates trusting me.”

It would be much of the same throughout the rest of regulation as the Norse continued to wear the Mastodons down on both ends of the floor, outshooting them to go along with it – NKU shot 58.6% from the field in the second half as Faulkner had a run akin to Warrick’s with 12 of his 14 points coming in the second half.

The winning streak for the Norse comes at a vital juncture in their schedule as they completed the first half of a four-game homestand with the win Saturday, but stare down a stretch of seven of the following eight games being on the road. Horn said that winning at home is crucial, but despite the daunting stretch on the horizon, his team is focused on controlling what they can and winning at every turn.

“We’re not looking at that part of it,” Horn said. “Regardless of how you finish and what those numbers are, you have got to win at home to be good in any conference in college basketball. I think from that standpoint it’s really important, and even more so with how the schedule shakes out in terms of when you’re at home and when you’re on the road.”

The Norse receive four days off as they prepare to take their three game winning streak into a matchup with Green Bay on Jan. 21 in Highland Heights. The game can be seen on ESPN+ and heard on ESPN 1530.