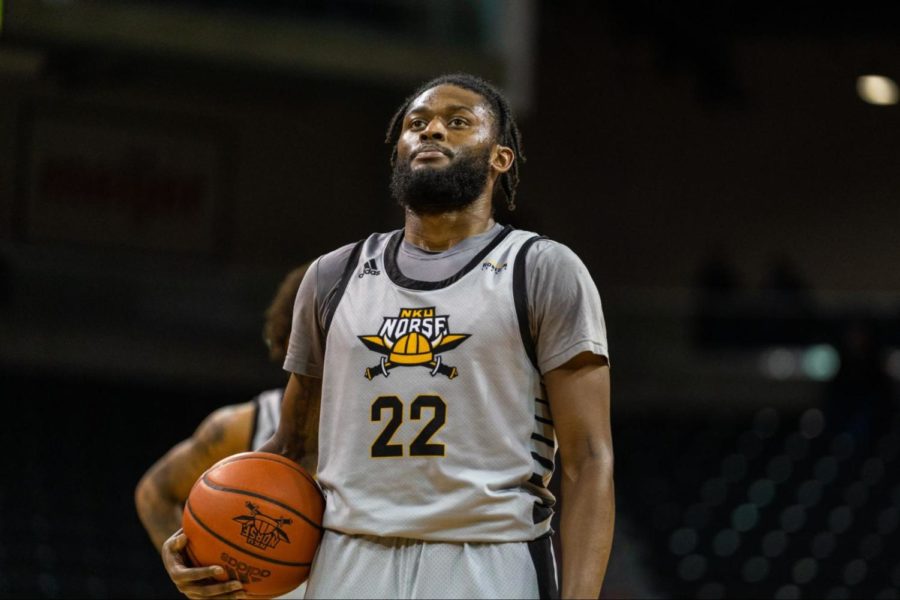 Gallery|3 Photos
Violet Lewis
Trevon Faulkner prepares himself to shoot free throws during NKU’s 78-76 overtime win over Detroit Mercy Sunday afternoon. Faulkner scored 14 points on the day, including a buzzer-beating three-pointer at the end of regulation to send the game into overtime.

NKU men’s basketball coach Darrin Horn said earlier this year that Norse fans were “getting their money’s worth” when coming to Truist Arena for their games this year. He reiterated that sentiment to lead off the post game presser after Sunday afternoon’s game, and it couldn’t be any more fitting for the occasion.

While the Cincinnati Bengals were busy clinching the AFC North division over the Baltimore Ravens in front of approximately 60,000 fans just down the road, 2,480 from around the Greater Cincinnati area huddled into Truist for a matinee tilt between the Norse and the Titans of Detroit Mercy. NKU was looking to get back on track after suffering a loss to Oakland in the final seconds of the game Friday night, while UDM was vying to reach the .500 mark in Horizon League play and snap a two game losing streak.

NKU and UDM would set the tone early on as they traded blows before the first media timeout, fighting to a 10-10 stalemate through the first eight minutes of action. The Norse would have some spotty shooting initially, but L.J. Wells came off the bench to lead his team with four points, with Trey Robinson and Marques Warrick following close behind with a combined six points. For the Titans, their lethal guard duo of Antoine Davis and Jayden Stone lit the way as both men had five points to their names.

The shootout would continue throughout the half with Stone lighting up the scoreboard with 11 points over the next 12 minutes, but the combined scoring of the Norse would keep them in the nick of things. Eight NKU players would find themselves on the board to close out the half, and Trevon Faulkner would provide a little bit of foreshadowing as time expired, hitting a three with an assist from Sam Vinson.

The second half would prove to be just as exciting, with Davis showing why he’s among the best scorers in college basketball. The graduate senior took over the offensive side of the ball for the Titans in the second half and went off for 18 points, a feat that propelled him deeper into NCAA lore as he moved to sixth all-time in career points scored.

When Horn was asked if Davis’ performance gave him deja vu of Friday’s game against Oakland and Jalen Moore’s performance in the second half, Horn mentioned that the home stretch of conference games is where his team needs to improve.

“There are some things that shouldn’t happen, that you need to avoid to be a good player and a good basketball team that just aren’t OK,” Horn said. “I’ve heard someone use the example of a surgeon, there’s just some mistakes that a surgeon can’t make. If you’re going to be a good basketball team, you can’t leave good shooters [open] down the stretch, especially in league games.”

But the Norse would continue to fight through it. The efforts of Warrick and Vinson on the offensive end would prove fruitful, and A’lahn Sumler got the job done on both sides of the ball. After seeing limited minutes throughout the past few games, the standout freshman played tough defense throughout the half and hit a three-pointer with 2:07 left to put the Norse out front.

“In other games I went all-in [on offense], and then this game I focused on what my coaches were telling me,” Sumler said on his key to getting out of his slump. “I was guarding and doing what I’m supposed to do, and the offense came after that.”

Things would come down to the wire with nine seconds left in regulation after Davis would hit a pair of free throws to extend UDM’s lead to three. Horn drew up a play during the timeout beforehand: Vinson would drive the ball down the court on the ensuing possession and hit Faulkner on the right wing with the game on the line.

The duo executed the play, with Faulkner firing over the extended arms of the Titans’ A.J. Oliver as time expired.

It certainly seemed like Faulkner was comfortable in the moment. He hit the shot with ease, drawing a raucous reception from the crowd as the score became knotted at 71 and the game was sent to overtime, where the Norse were able to shut down Davis and Stone en route to a 78-76 win.

With the win, NKU remains tied with Milwaukee at the top of the Horizon League standings with a 5-1 conference record. The two teams will face off to see who the top dog is at this point in the season come Thursday night when the Norse head on the road to take on the Panthers. The game tips off at 8 p.m. and can be seen on ESPN+ and heard on ESPN 1530.