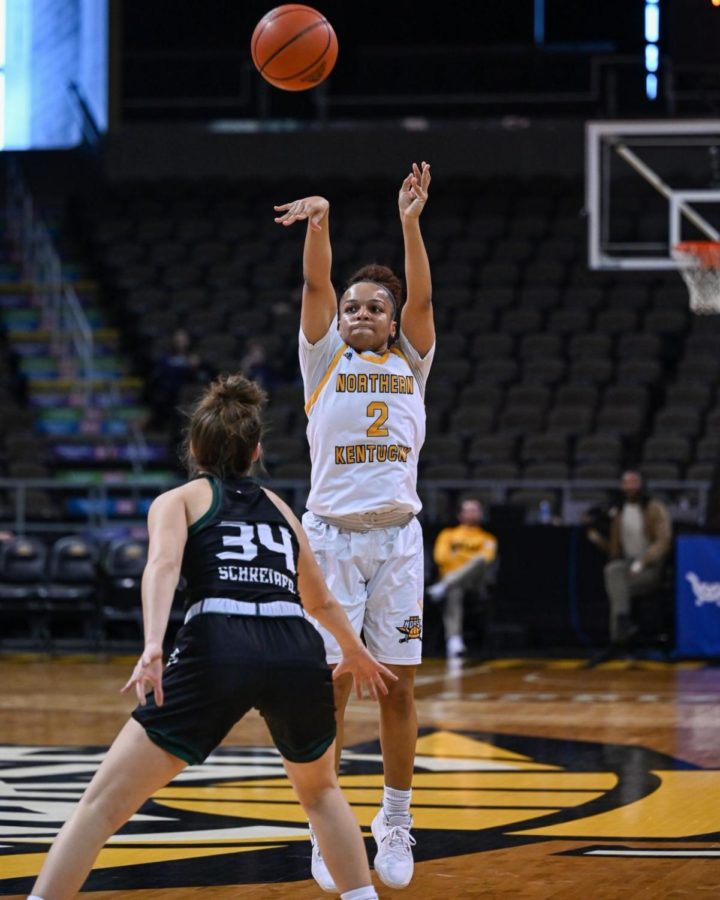 Gallery|3 Photos
Taylor Keeton
Ivy Turner shoots a three-pointer from the top of the key in the first half of NKU’s loss to Green Bay Saturday afternoon. Turner would finish with 10 points, two rebounds and two assists in the game.

Plagued by missed field goals, turnovers and points allowed in the paint, the NKU women’s basketball team fell in a matinee matchup Saturday afternoon to the Green Bay Phoenix by a score of 70-53.

Ivy Turner and Trinity Thompson were the lone bright spots for the Norse offensively as both would head the scoring effort for the Norse, coming up with 10 points each as NKU shot 31.3% as a team on the afternoon. For the Phoenix, Cassie Schiltz went off for 18 points, five rebounds and five assists as the trio of Jasmine Kondrakiewicz, Bailey Butler and Maddy Schreiber would combine for 33 points on their way to their ninth consecutive win.

Norse head coach Camryn Whitaker commented following the game that her team has a long way to go on offense if they are to compete with teams that hound the paint on defense like Green Bay.

“Green Bay was more physical than us, they trapped us, played pack-like defense where they pack it in and make it really difficult to get to the paint,” Whitaker said. “That’s what we’re good at, and when you take away what you’re good at, you have got to try to find something else.”

The Phoenix would immediately set the tone for the game as after winning the tip-off, Butler would find paydirt on a three-pointer from the right wing. The Norse would still keep it close throughout the first quarter, with Lindsey Duvall, Kennedy Igo and Kailee Davis all scoring three points as they found themselves down by three through the first ten minutes.

NKU would briefly tie things up at the beginning of the second quarter as Emmy Souder completed a three-point play after being fouled by Kondrakiewicz, but Green Bay would immediately pull away with a 6-2 run over the next two minutes. The Norse would still fight to keep it close throughout much of the second, but a 7-2 run at the end of the half from the Phoenix capped off by Butler’s second made three of the night seemingly deflated the Norse as they took a 36-27 deficit into the half.

Things would only get worse for Northern as they would only attempt five shots from the field in the third quarter, all of them being three-pointers which only netted them six points from Turner and Khamari Mitchell-Steen. The Phoenix would outscore the Norse 14-4 through the first five minutes of action in the half and would extend their lead to 19 by the end of the quarter.

The fourth quarter would see much of the same. Although the Norse put forth a much better shooting effort by going 5-for-13 from the field, going 6-for-7 from the free throw line and managing to get Sydney Levy to foul out with 3:30 remaining, it would be too little too late as the Phoenix continued to keep them out of arm’s reach.

Turner had similar comments to those made by Whitaker post game, mentioning that the Norse need to put in the effort to find new ways to score in order to avoid games like the one Saturday.

“As a team, we shot a lot of threes [against Green Bay], so I just think that when that happens, we need to find ways to get to the free throw line and do other things to shoot from the outside,” Turner said.

The Norse dropped to 9-6 overall on the year and 3-3 in Horizon League play, and after losing two of their last three, they will look to right the ship as they head on the road for a two-game road trip beginning Friday. Their first stop will be Rochester, Mich. to face off against Oakland for a 7 p.m. tilt against the Golden Grizzlies, which can be seen on ESPN+.