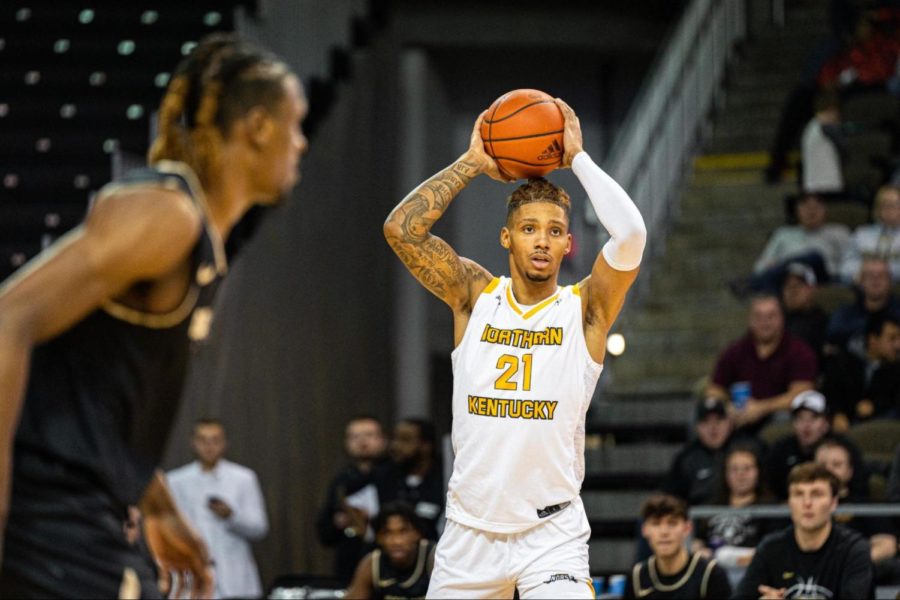 Gallery|4 Photos
Violet Lewis
Norse forward Chris Brandon looks for a teammate to give an inbounds pass to during NKU’s 64-63 loss Friday night. Brandon went 2-for-2 from the field with four points and six rebounds in NKU’s first home loss since Nov. 7 against Kent State.

In sports, much like life, all good things must come to an end, and the NKU men’s basketball team’s eight consecutive home game win streak is no exception as the Norse took a 64-63 loss against Oakland, their first negative tally at home since the season opener against Kent State.

Despite a 16-point performance from Marques Warrick, great minutes off the bench from Imanuel Zorgvol and Trevon Faulkner, and having the lead for over 78% of the game, the Norse were unable to close out what would’ve been their ninth straight win in Truist Arena due to mistakes down the stretch that put the ball in the hands of the Golden Grizzlies’ Jalen Moore. The reigning Horizon League Player of the Week was practically gifted points down the stretch as he went to the line four times for a total of nine points in ten shots in the second half, including going 6-for-6 from the charity stripe in the final minute and a half of the game.

Norse head coach Darrin Horn said postgame that although Oakland’s playing ability—more specifically Moore’s—is to be commended, his team’s inability to stick to the game plan they worked on this week for containing the senior guard was what ended up costing them what had been an eight point lead with four minutes left in regulation.

“What Jalen Moore did down the stretch, we’re clearly aware that he can do, we spent 15 minutes in practice the last two days working on it and we didn’t go out and execute any of it down the stretch,” Horn said. “So from that standpoint, I’m pretty disappointed, and clearly that’s on me to figure out how to make sure our guys understand that better and do it when it matters in game action.”

The game started as a seesaw affair with the Golden Grizzlies grabbing a 10-9 lead before the first timeout off five points from Trey Townsend and Rocket Watts. The lead wouldn’t last long though, as A’lahn Sumler would come off the bench for five points in six minutes and the Norse drew two fouls from Blake Lampman within the first six minutes of the game.

NKU would take this momentum and run with it to the half as, with a Warrick jump shot at 8:32, the Norse would take the lead and wouldn’t look back for the remainder of the half. Even when missing Chris Brandon for most of the half, Zorgvol would step up in his absence and grab four rebounds before the clock hit double zeros.

However, it was time for the Jalen Moore show to begin, as after shooting his only missed free throw of the night, the senior guard would nail his second attempt to open the scoring in the second half after being fouled by Xavier Rhodes. He would nail two more free throws a little over a minute later to make it a four point ballgame.

Although both teams were sloppy from the field in the opening minutes of the half, the game would turn into a shootout in the final seven minutes. Trey Robinson led the Norse offense with five points as Warrick, Faulkner and Sam Vinson would trail him with four, and Moore would get the job done from the field as well as the line, going 3-for-7 from the field.

Moore would have two opportunities down the stretch to shoot three free throws in a single trip, the first coming after being fouled by Brandon with 1:16 remaining in the game. He would find the mark on all three to make it a 62-57 game, and after a Warrick free throw, the Grizzlies guard would have a heat check as he pulled up from the wing and sank a three to pull Oakland within two. Vinson would foul Moore beyond the arc with five seconds remaining, and the latter would hit the go-ahead shot on his third attempt from the line.

Although they suffered their first Horizon League loss of the year Friday night, the Norse remain tied for first place with Milwaukee at 4-1 in conference play. Oakland currently sits in a four-way deadlock for third place in the conference with a 3-2 record.

The Norse will look to bounce back Sunday afternoon in Highland Heights as they host Detroit Mercy in the first meeting between the two teams this year. The game tips off at 2 p.m. and can be seen on ESPN+ and Fox Sports 1360.