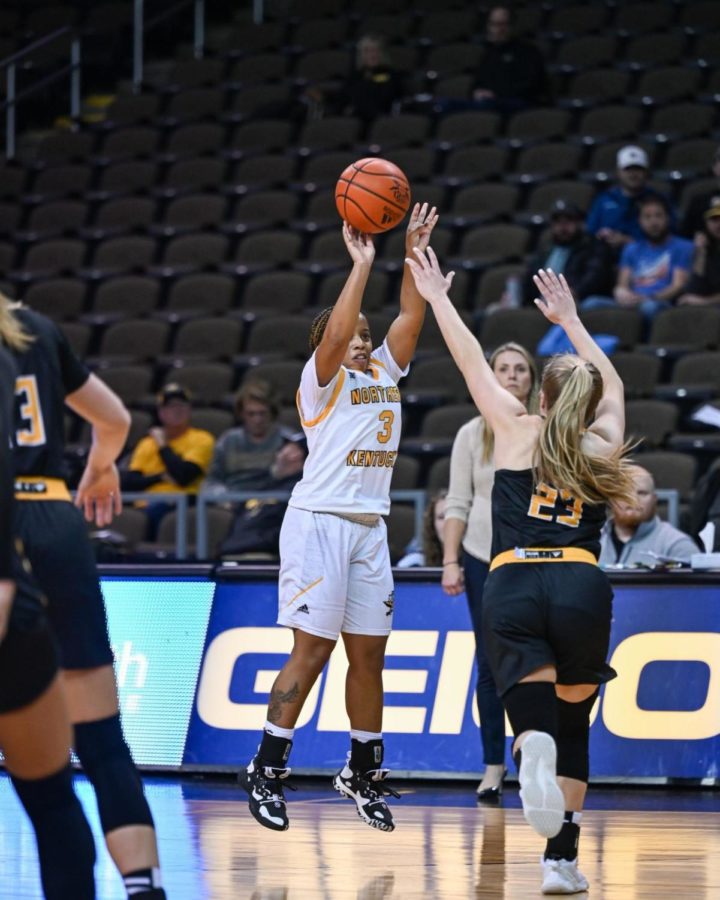 Gallery|3 Photos
Taylor Keeton
Kailee Davis unloads a three-point shot attempt in the second half of NKU’s 66-60 win over Milwaukee Thursday night. Davis scored 26 points in a second half that saw the Norse find a spark after being down by 10 at the half.

On a night that saw Lindsey Duvall and Ivy Turner honored for surpassing 1,000 points on their respective careers, a new face emerged to give the dynamic duo a bit of a reprieve.

The NKU women’s basketball team came into Thursday night’s matchup against Milwaukee in need of a win after a tough loss at IUPUI and got exactly what they were looking for as they ground out a hard-fought 66-60 victory.

Kailee Davis led the way for the Norse, going off for 26 points off 50% shooting from the field and 5-for-9 three-point shooting while also being a pest on the defensive side of the floor by forcing three steals. Emmy Souder followed up Davis’ performance by recording her double-double of the season and her first since Nov. 17 against Dayton as she scored 14 points and snagged 10 rebounds.

Norse head coach Camryn Whitaker said that despite a rough start to the game, her team came out of the tunnel after halftime motivated and ready to play in the third quarter, something the Norse have struggled with so far this year.

“I told the team at halftime that ‘I’m not going to get upset, I’m not going to yell, we’re not going to do that, but you guys have to make the choice [to play hard in the third quarter], and they did,” Whitaker said. “It starts with our point guard, I challenged [Davis] this week and I challenged her at halftime. I said ‘we go as you go,’ and number one that’s the sign of a good point guard … and two it’s her responsibility to this team.”

Both teams would have trouble finding the basket early on until the 3:35 mark in the first quarter when Milwaukee would break off on an 8-0 run, taking a nine-point lead over NKU. Kendall Nead would lead the charge for the Panthers, scoring five during the run and finishing the quarter with 10 points in total while the Norse were held to 3-for-15 shooting due to Milwaukee’s length down low, with Emma Wittmershaus and Megan Walstad being the main obstacles in the paint.

After taking a 15-8 lead into the second quarter, Milwaukee would continue to dominate the game defensively to the tune of only six points being allowed off 14 field goal attempts. The Panthers would extend their lead to 10 before the half courtesy of a jumper from Walstad that capped off an 8-2 run.

After an uncharacteristically quiet half for Duvall and Turner, the Norse offense needed a spark from an outside shooter. Enter Davis, who exploded for 12 points in the third quarter as the Norse would take their first lead of the game at 2:46 when she dished out an assist on a three-pointer from Turner. The Panthers would briefly retake the lead later in the quarter following free throws from Walstad, but Davis would stomp out the last of Milwaukee’s momentum as she hit a three-pointer to place the Norse back out in front.

“Our posts really draw a lot of attention and are great passers,” Davis said of the strategy the Norse utilized in the second half. “I think if we keep working on our movement on the perimeter, it really opens things up for us, especially if we look for the post first.”

The fourth quarter would see much of the framework of the game plan that Whitaker and company laid out come to fruition as the Norse were able to get the 6-foot-2 Walstad to foul out with 5:37 remaining in the game, opening up more opportunities offensively. Davis and Souder would dominate offensively as the pair went off for 11 and 10 points respectively, including Souder’s second made three-point field goal of the season, to close out the win for the Norse.

“I practice those shots in practice every day, so when I’m given the opportunity, I try to excel,” Souder said of her three-pointer that put the Norse up by 10 with 5:25 to go. “They put me in the position and decided to leave me open, so I just tried to knock it down.”

The Norse improved to 3-2 in Horizon League play with the win and are now tied with the Panthers for fourth in the conference. They’ll look to pick up their fourth Horizon League win of the year on Saturday when they take on Green Bay in a matinee matchup as the action at Truist Arena tips off at 2 p.m. The game can be seen on ESPN+.