Norse use lockdown defense, scoring clinic to come up with win over Wright State 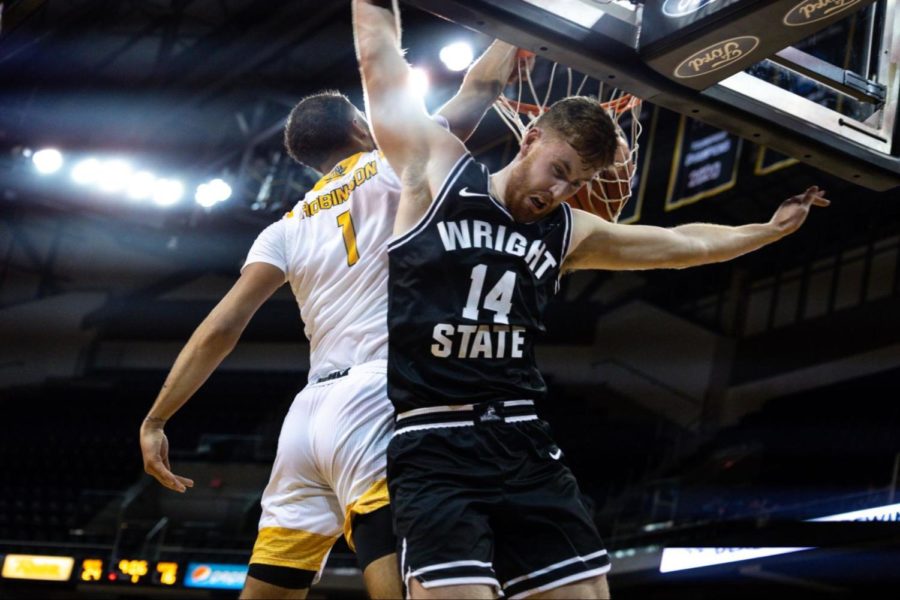 Gallery|3 Photos
Emory Davis
Trey Robinson puts Wright State's Brandon Noel (14) on a poster with a thunderous dunk in the first half of NKU's 78-64 win over the Raiders Thursday night. Robinson would score eight points and lead the team in steals with three.

It’s safe to say that Darrin Horn’s squad took out some frustration in this one.

Despite a blazing effort in the final 10 minutes of the second half to repeat last season’s Horizon League Championship game by Trey Calvin and Wright State, the NKU men’s basketball team kept the Raiders out of arm’s reach as they picked up a 78-64 win, moving the Norse to first place in the Horizon League with a 3-0 conference record.

Nine of the 10 Norse players that played got into the points column, with Marques Warrick leading the way with 19 and Trevon Faulkner and Chris Brandon following that with 12 apiece. Sam Vinson also continued to show why he’s one of the best defenders in college basketball, picking up two steals on the night as well as showing out on the offensive end with 11 points, five rebounds and five assists.

“We played defense at the level we need to, especially in the second half when we forced eight steals,” Horn said of his team’s effort on the night. “Offensively I thought we were better in transition tonight, we had four guys in double figures [in points].”

The Norse opened up the night with some theatrics as Brandon, Trey Robinson, and Imanuel Zorgvol all had show-stopping dunks throughout the first twelve minutes of the ballgame that got Norse fans out of their seats and NKU into a 10-point lead. As a team, the Norse found themselves going 11-17 from the field as Robinson and Warrick led the way with five points before the first media timeout.

Although they went scoreless for the final two minutes of the half and going 1-13 from the field, NKU put their nose to the grimestone defensively to work for a 33-29 lead at the half. The Norse were able to keep the Raiders to 1-for-8 from behind the three point line as well as multiple runs in which Wright State was held scoreless for two minutes or more.

Warrick and company would come out like a house on fire to begin the second half: the Norse were perfect across the board shooting-wise in the first 3:22 as they went 4-for-4 from the field and the free throw line, and 2-for-2 from beyond the arc while keeping Wright State off the board other than an Amari Davis bucket from the charity stripe.

But the Raiders weren’t out yet. Despite the Norse getting out to a 20-point lead by the 14:01 mark and keeping Trey Calvin to 10 points in the first half and off the board for six minutes in the second, the senior guard would go off for 21 in the final stretch.

The run wouldn’t be nearly enough though, as even though the Raiders outscored the Norse by five in the second half, Trevon Faulkner would come off the bench and use the leadership skills he learned from March’s loss against WSU, scoring eight in the final 14 minutes. Vinson and Robinson would also step up on the defensive end to combine and force five of NKU’s eight steals in the second half.

“It’s just the way we play defense, we dictate what they do and we don’t allow them to be comfortable,” Vinson said of the efforts of himself and his teammates. “With how we play, it’s easy to jump the passing lane and get steals when everyone’s showing length. The other team had trouble getting into the paint and passing the three-point line, so when we dictate what the other team does, we’re really good.”

Warrick talked about the win post game and reiterated Horn’s comments from earlier in the year about learning and moving on from the loss in March against the Raiders.

“We try not to dwell on it, but we’re on to the next season with different teams on both ends,” Warrick said. “We did a good job preparing for this game, so we needed to forget about last year, it’s a new year.”

Brandon talked about his third double-double of the year, saying confidence and having the right mindset was his key to staying on his rebounding tear as well as getting into double-digit scoring on the night.

“I know I can dominate the guys they have across the floor and that’s what I came to do, just perform,” Brandon said.

After they head to Indianapolis Saturday for a New Years Eve tilt with IUPUI, the Norse will return to Highland Heights on Friday, Jan. 6 as they take on Oakland for their first game of 2023. The game starts at 7 p.m. and can be seen on ESPN+ and heard on ESPN 1530.