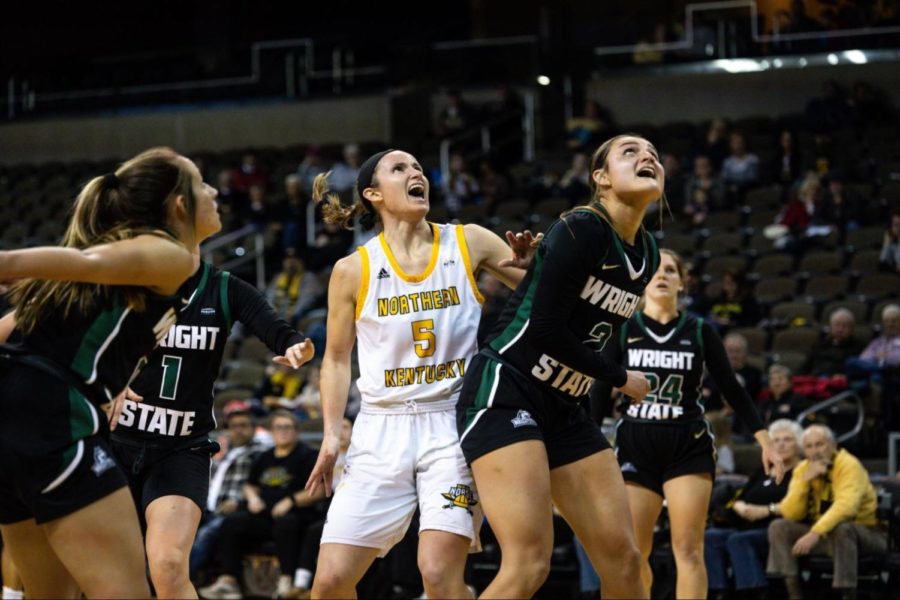 The NKU women’s basketball team returned to their Horizon League schedule Wednesday night by renewing their rivalry with Wright State as they pulled out their second conference win of the year by a score of 73-50.

The dynamic duo of Lindsey Duvall and Ivy Turner were ready to rise to the occasion for the yearly bout at Truist Arena, as the former scored 25 points and grabbed 13 rebounds for her seventh double-double of the year and the latter put up 15 and eight of her own respectively. Kennedy Igo was another key face in the Norse win as her two three-pointers and lockdown defense helped shut the Raiders down.

“I think our team is very mature, and we learned from our three-game losing streak,” Duvall said of the team’s effort in another key conference win. “I think it’s shown, and I feel like we’ve had a couple of [consecutive] good third quarters. That’s really helped us and I think we need to keep being strong and together and we’ll be just fine.”

NKU head coach Camryn Whitaker said postgame that coming into Wednesday night’s matchup, she found herself more concerned with Wright State, despite their struggles this year, than she was with Cincinnati the last time the Norse were on the floor, and complimented Kari Hoffman’s squad and their shooting ability early in the game while praising her own squad’s ability to bounce back.

“Defensively, we got off to a little bit of a rough start and they hit some shots early in the first quarter, but our rebounding effort in beating somebody 53-29 on the boards is a really solid number,” Whitaker said. “I thought defensively we made some adjustments to try and get through screens, then we decided to switch, so I thought our kids did a good job of executing the game plan.”

Those adjustments would pay off in the second quarter, as after the Raiders took a 15-13 lead through the first ten minutes of the ballgame, the next ten would see the Norse go on a 22-7 run as they held WSU to just 17.6% shooting from the field including six missed three-point attempts. Igo would give the Norse the lead with a three-pointer, and Duvall and Turner would combine to score 14 of NKU’s points in the quarter as they took a 35-22 lead into the half.

The third quarter would bring much of the same: although the Raiders shot 60% from beyond the arc, they would be held to going 5-for-21 from the field as the Norse continued to pour their own offensive efforts on. The usual suspects of Duvall, Turner and Igo headed the spear of NKU’s scoring attack, but efforts from Khamari Mitchell-Steen and Trinity Thompson were also key. After missing some tough shots early on, Mitchell-Steen would come back with four points in the third and Thompson would come off the bench to give six points of her own.

The Norse would close out the dominant win in the fourth, extending their lead to 23 with six minutes remaining in the game. Emily Chapman and Kacee Baumhouwer would attempt to keep the Raiders in the game as they scored nine and eight points respectively, but NKU would keep the game out of reach.

Although she only scored three points on the night, Ellie Taylor was a key performer for the Norse in the win. The junior guard contributed three rebounds and two assists as well as a solid defensive effort in containing one of the Raiders’ most prolific offensive performers in Bryce Nixon, who was kept to 11 points on the night.

The Norse moved to 8-4 overall on the year and 2-1 in conference play with the win. They will head on the road Friday afternoon for a 2 p.m. tip in Indianapolis, IN as they face off against the IUPUI Jaguars. The game can be seen on ESPN+.