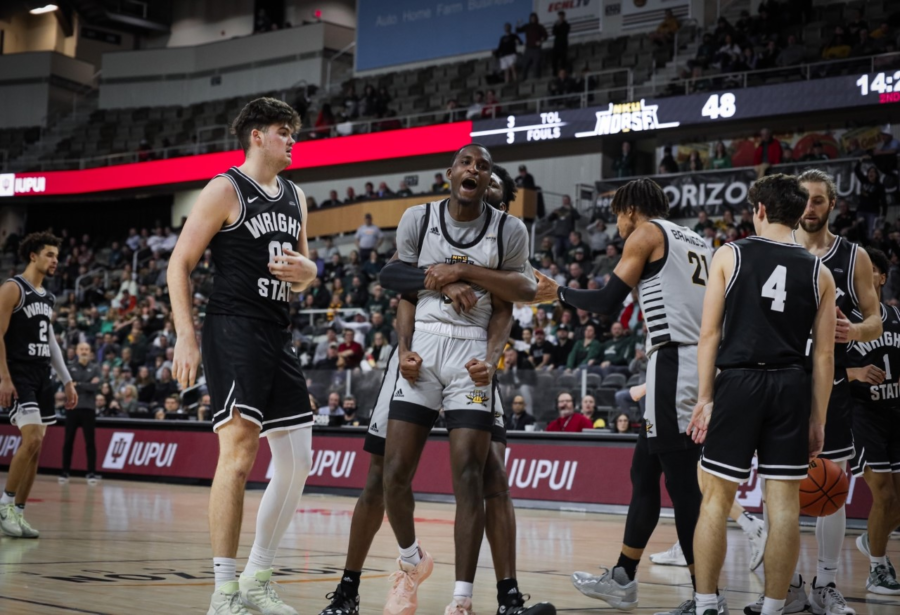 The NKU men’s basketball team puts their seven-game winning streak at home on the line Thursday as they resume Horizon League play, welcoming their biggest rival in Wright State through the doors of Truist Arena.

The rundown: The Norse enter the contest in a three-way tie for first place in the Horizon League at 2-0, sitting on top of the conference with Milwaukee and Cleveland State. They stand at 7-6 overall on the year and have a seven game win streak at home that includes victories over conference foes Robert Morris and Youngstown State.

NKU’s defense ranks among the best nationally as they have forced the 35th most turnovers and rank 34th in steals (9.2 per contest), with Sam Vinson tied for fourth in steals per game among individual players across college basketball with 2.9 per game. Chris Brandon has continued his dominance on the boards throughout the season, coming in at 21st nationally with 121 total rebounds. On the offensive side of the ball, Marques Warrick has continued to be a sharpshooter as he’s listed at 21st in points in the NCAA.

Although much of the focus coming into the matchup has been centered on the heartbreak of the Horizon League Championship loss last season to NKU’s fiercest rival, Norse head coach Darrin Horn said during basketball media day that what really matters is the fact that his group was able to have a taste of losing in a big game to motivate them to get better for this season.

“It was a group that played extremely well down the stretch, and it was a group that competed at a high level, and short of a four-to-five minute stretch, played great basketball in tournament action, which is what we want to do,” Horn said. “I think it’s been a huge motivator for our guys that are returning that have been in that situation and to have that taste in their mouth so to speak in terms of how we worked this summer and how we prepared going into the season, and hopefully more than anything it was a learning experience.”

On the other end, Wright State hasn’t quite lived up to expectations so far this year. The defending Horizon League champions are 7-6 on the year, but despite being ranked third in the conference preseason polls, they are winless in two conference contests this year that include double-digit losses to Youngstown State and Robert Morris, two teams that NKU has already knocked off this year.

Despite this, the Raiders boast one of the most formidable offenses in the conference as they have the second highest field goal percentage in the conference at 49.6%. Guard Trey Calvin has been a force to be reckoned with this season, averaging 17.1 points per game and making over 48% of his shots from the field. Brandon Noel will be another name to keep tabs on, as the freshman forward averages 12.3 points per game and is one of the team’s most prolific rebounders, tied with senior guard Tim Finke with 80 rebounds on the year.

History: The rivalry between the Norse and Raiders has traditionally been a tight one as Wright State currently has the bragging rights over NKU, leading 9-7 all-time including the last two times the programs have squared up. Wright State will look to match their longest winning streak in the rivalry with three consecutive wins.

Get A’lahn Sumler involved: Surprisingly, the winner of the Horizon League’s Freshman of the Week award for the week of Dec. 11 only played eight minutes on the road against Florida Atlantic last Wednesday. Considering his performances against Eastern Kentucky and Miami-Hamilton, the Norse need to find spots for the breakout freshman to impact the game with his pinpoint shooting to add another weapon to NKU’s already lethal arsenal in the back court.

Cool Trey Calvin down: The Raiders’ senior guard is on fire coming into Thursday’s matchup: he was awarded with Horizon League’s Player of the Week honors following a 27 point performance against Miami (OH) on Dec. 22, shooting 77% from the field and tallying seven assists. He’ll be the one for the Norse to key in on defensively in order to come out of the contest with a win.

Build momentum for the road: Looking even further than Thursday’s matchup, the Norse need to use the game as a launching point to set the tone for the remaining Horizon League slate. They have lost all five of their games on the road so far this season, so getting a win against their biggest rival before heading on the road to Indianapolis to take on IUPUI would go a long way towards building confidence in a key portion of the schedule.

Where to watch/listen: The game can be seen on ESPN+ and heard on ESPN 1530.