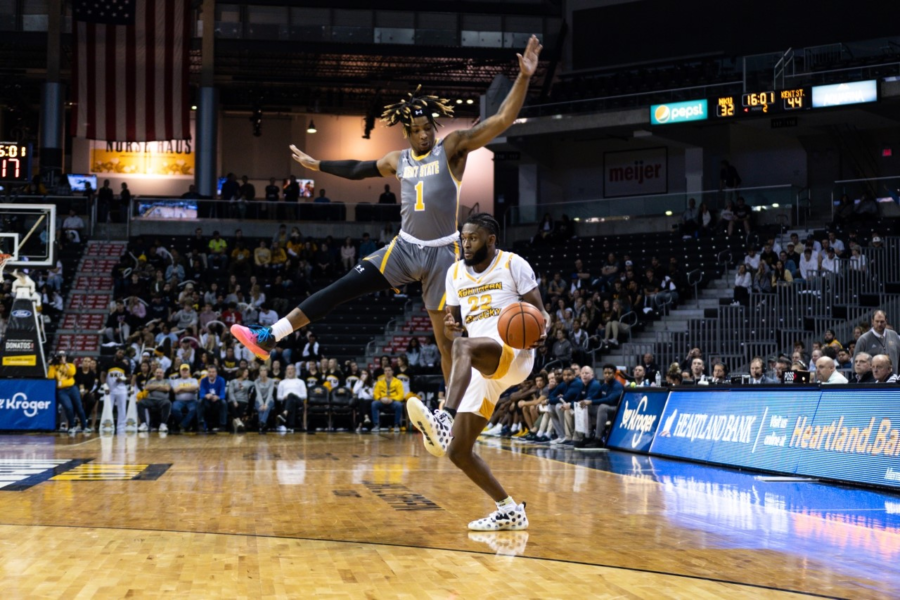 The Northern Kentucky men’s basketball walked out of Truist Arena Sunday with their second consecutive win, taking a 22-point lead into halftime and never looking back as they downed the Miami Hamilton Harriers.

Marques Warrick resumed his dominance on the offensive side of the floor, going off for 26 points as he went 8-for-10 from the field and knocked down six three-point shots. Imanuel Zorgvol also played a huge part offensively in the win as the seven-footer had 15 points and grabbed eight rebounds, three of them coming on offense. From the defensive side of the ball, the Norse had 17 steals as a team and forced 26 turnovers, which led to 42 points.

With Miami Hamilton being a junior college, head coach Darrin Horn commented postgame that despite talent disparity between the two programs, the Norse treated the game as if they were playing to get better.

“I thought we really shared the ball well in terms of how we really moved it and how unselfish we played offensively, that was a really big thing,” Horn said. “Defensively, other than the start of the second half, we played with the type of energy and aggressiveness that we need in order to be good.”

The Norse and Harriers would trade buckets through the first two and a half minutes before NKU completely took over as they went on a 26-5 run that lasted until the 5:15 mark to take a 28-10 lead. Warrick had 14 points during this run as breakout freshman A’lahn Sumler followed him with five of his own.

NKU would take a 40-18 lead into the half as Sam Vinson and Miami Hamilton’s King Goss traded three-point buckets in the final minute. The Norse tallied 11 steals and kept the Harriers to 31.6% shooting over the first 20 minutes.

As Horn mentioned in the postgame presser, NKU’s defensive aggressiveness broke down at the start of the second half as Miami Hamilton began to whittle the Norse lead down to six after 11 minutes of play. The Harriers would go 9-for-11 from the field as Goss would contribute 10 to the cause, with the Norse allowing five turnovers off steals as they would be outscored 23-17 before the 8:57 mark.

The Norse found that defensive intensity again and used it to the fullest for the final minutes of regulation, keeping the Harriers completely off the board in a 24-0 run that saw them go 0-for-9 from the field. Sumler and Warrick led the scoring attack for the Norse down the stretch, contributing seven and six respectively as the Norse marched to a 81-41 win.

Horn would bring up some of the individual performances of his players postgame, noting Vinson as one he was especially pleased by. Last year’s Horizon League Freshman of the Year would finish his night back in the double digits in the points category with 12, but what Horn was really impressed with was the sophomore’s presence on defense as he stole the ball eight times from Miami Hamilton’s offense.

“The thing that makes Vinson such a special player is that he literally can impact the game at every area and every level, and he can win a game for you without scoring a bunch of points,” Horn said. “Getting eight steals in a single game, I don’t care who you play, that’s incredible.”

The Norse head to Boca Raton, Fla. on Wednesday for one final game before Christmas as they look for their first win on the road on the season in a tough test against the Florida Atlantic University Owls. The game begins at 7 p.m. and can be heard on 550 WKRC.