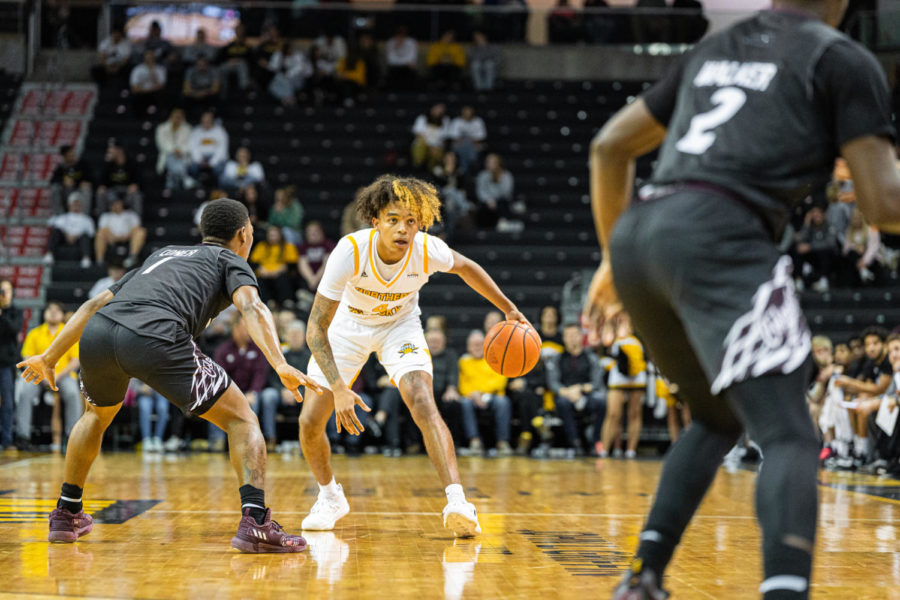 A’lahn Sumler looks for a weak spot in Eastern Kentucky’s defense in the second half of the NKU men’s basketball team’s 64-61 win over the Colonels Wednesday night. Sumler finished with 12 points on the night, all of them coming off three-point shots.

“If you’re paying to come to our games, you’re getting your money’s worth.”

It seemed like an understatement following the 64-61 affair in favor of the Norse as they had their third consecutive game at home come down to the wire, with some different faces stepping up for the team offensively. Whereas Sam Vinson, Marques Warrick and Trevon Faulkner normally act as the life force of the offensive side of the ball for NKU, Xavier Rhodes would contribute 19 points and four assists, while freshman A’lahn Sumler, who has now used up his final buffer game before he loses redshirt eligibility, hit some big shots while playing key minutes in the game.

“If you told me before the game that Sam, Trevon and Marques were going to go 1-for-21 [from the field] and we would win, I would’ve told you that would be almost statistically and mathematically impossible,” Horn joked of the versatility and depth of his team before turning more serious. “What it does is that it speaks to the fact that we received complete contributions from other guys.”

The fast-paced Colonels got off to a hot start as junior wing Devontae Blanton scored seven points in the first five and a half minutes to push EKU to an 11-4 lead over the Norse. Despite trying to match the pace, Xavier Rhodes and Marques Warrick would be the only two Norse players on the board during this time as the pair contributed two points a piece.

Something awakened within the Norse at the 13:31 mark, as they found themselves going a flawless 5-for-5 from the field and 3-4 from the free throw line, and they would go on a 16-0 run over the course of 4:12. Sumler would hit his first three-pointer of the game at 11:46 to give the Norse their first lead of the ballgame. After a pair of buckets from the Colonels, Imanuel Zorgvol slammed home a monster dunk and Rhodes would hit a layup to put him at a flawless 5-for-5 from the field and 12 points, already as NKU would force Eastern to limp to a media timeout following what ultimately culminated in a 20-4 run.

“We focus on defense and that carries over to our offense,” Rhodes said of the team’s mindset in practice and how it translates to game situations.

Eastern would go on an extended run of their own, winding up making it a four point game at the half as freshman guard Turner Buttry would give the Colonels five over the remaining seven minutes of the half. The Norse would go cold from the field, shooting 2-for-9 from the field and allowing six turnovers. NKU would allow 11 turnovers altogether in the half, with EKU directly capitalizing on them with 14 points.

The Colonels would match the Norse basket for basket right out of the starting possession in the second half before a small scuffle would ensue five and a half minutes into the half. EKU’s Dardan Kapiti would commit a hard foul on Chris Brandon after the latter attempted to drive into the lane, much to the displeasure of the Norse faithful in attendance. The play would be upgraded to a flagrant two violation after further review from the officiating crew, automatically ejecting Kapiti from the game.

At the 7:13 mark, the in-state rivals would find themselves tied at 48 as Rhodes took control of the offensive pacing with a ferocious attack in the lane and pinpoint deep ball shooting. The Colonels’ Michael Moreno, who was coming off a game in which he sank the most three-point shots in school history with 11, matched Cooper Robb and DaShawn Jackson with some ridiculous rainbow threes that somehow made their way into the basket.

Then Sumler began to get hot.

The freshman would continue his dominance from beyond the arc in the last 6:30 of the game, going 3-for-4 shooting—all of his nine points coming via three-pointers—as the Norse found themselves back in the driver’s seat.

“I put in the work after practices, so me being in the game, I got my opportunities and did what I was supposed to do,” Sumler said of his big night. “With it being my first time, I was definitely tired, but I fought through the fatigue like coach tells us to in practice, and it carried over into the game.”

After Sumler hit his final key three of the night with a minute and a half left in the game, EKU freshman guard Tayshaun Comer hit a three from the left wing to tie things up. Warrick would be fouled in the back court by Moreno and would sink one of his two free throw opportunities, and Vinson would be fouled as well, draining two of his own to give NKU a three-point lead. Brandon and company would then lock down Eastern to secure the third win out of the last four games for the Norse.

“It was kind of a risky play, because I was on [Moreno], one of their best shooters,” Brandon said of the defense’s lockdown play during the final minute. “I was reading it and I think [EKU’s Isaiah Cozart] didn’t see me coming in. I could’ve grabbed the rebound but I blocked it and turned it over, and then they end up missing the shot and foul.”

The Norse finish their two game homestand Sunday afternoon for a contest with the Miami Hamilton Hurricanes. The game tips off at 2 p.m. and can be seen on ESPN+ and heard on Fox Sports 1360.