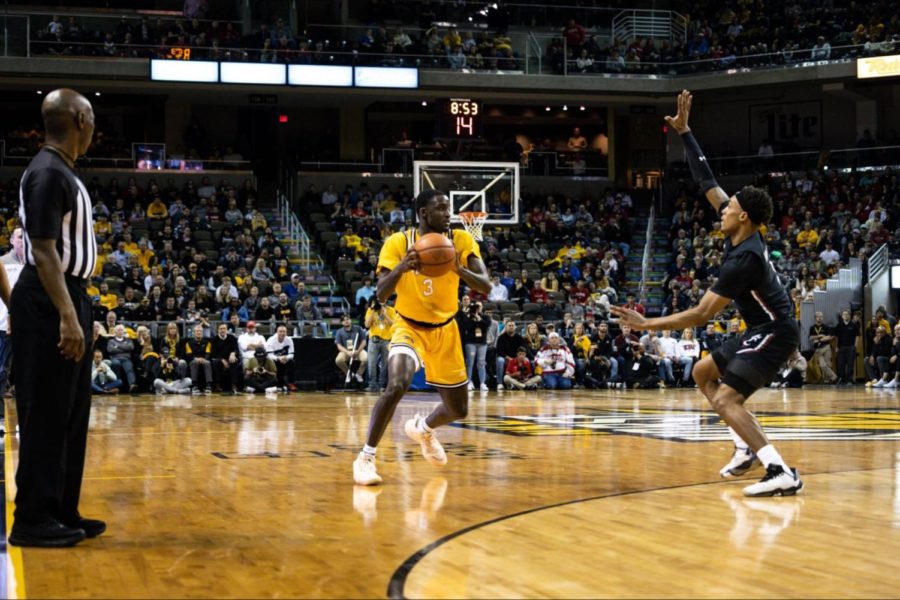 Men’s basketball took home a win Sunday against Tennessee Tech with a score of 85-77.

Following an 0-for-3 slump in the Gulf Coast Showcase over Thanksgiving week and an ugly first half, the NKU men’s basketball team dug deep and found a way to win Sunday afternoon against Tennessee Tech in a 85-77 win that took two additional overtime periods to manifest.

With Sam Vinson on the bench with an injury and Xavier Rhodes out with illness, the Norse would receive yet another phenomenal performance from junior guard Marques Warrick. After breaking the 1,000-point mark for his career against Florida Gulf Coast on Monday and being named to the Lou Henson Player of the Year watchlist on Friday, Warrick put up 45 points on the Golden Eagles, setting the record for the most points in a single game by a Norse player in the Division 1 era.

“Forget the 45, I just wanted to win,” Warrick said of his performance. “I told this team before the game that we need to do whatever it takes. We had two starters out, so a lot of people off the bench are going to have to step up, and we had some new starters in who needed to step up as well.”

The Norse would get out to a 9-3 lead through the first three and a half minutes as Warrick would record his first four points of the afternoon early. The difference in the Norse starting lineup would also make an impact, as an assist from the recently returned Jake Evans led to a three-point bucket from Hubertas Pivorius.

“We put a lot of emphasis in the past two practices on sharing the ball more and looking for our guys on the opposite side of the floor,” Pivorius said of his expanded role. “All credit to my teammates, they were finding me today and I was able to knock some shots down.”

But the six-point lead would dwindle down to nothing, as over the next 6:15 minutes TTU would go on a 12-0 run with junior forward Jaylen Stayton leading the charge for the Golden Eagles with five points. Over the course of the run, NKU’s shooting struggles would once again rear its ugly head as the Norse went 0-for-5 from the field.

The Norse would receive a new breath of life over the next two minutes with contributions from the bench, as Trevon Faulkner started a 10-0 run by sinking a three and Imanuel Zorgvol finished it with a layup to put the Norse back in front. Then the Norse went cold again, going 2-for-10 from the field as junior guard Brett Thompson dropped 11 points and the Golden Eagles outscored NKU 22-8 for the remainder of the half.

Warrick would help the Norse climb back into things through the first seven minutes of the second half, putting the team on his back by scoring 13 points to add to his already impressive total, with Pivorius giving three of his own as NKU outscored TTU 16-9 during the run. The two teams traded blows once more, but the Norse would tie the game at 8:54 as Warrick hit another three to put his point total at 29 for the afternoon.

NKU would come within a point of tying the game again twice throughout the half, but TTU continued to dangle the lead out of the reach of the Norse until the closing seconds of regulation as Jayvis Harvey was called for a flagrant foul. Chris Brandon would sink his two free throws to tie the game at 63, but Warrick would miss a three-pointer at the buzzer to send the game to overtime.

The Norse would start the first overtime quickly as Warrick and Pivorious would drive through the lane for a pair of layups. Diante Wood would get the Golden Eagles on the board in the period with a layup, and after Pivorious would sink a three, Jaylen Sebree would sink a three and Daniel Ramsey would drive home a dunk for TTU as the game was deadlocked again at 70 going into another overtime period.

The second OT proved to be much more fruitful for the Norse as their depth would provide major benefits. Warrick would drop eight in the period, but Faulkner, Brandon and Pivorious all had a hand in outscoring the Golden Eagles 15-7 and ultimately taking home the win.

Brandon had yet another phenomenal game on the boards coming off an uncharacteristic showing in the Gulf Coast Showcase, in which he had just one game where he collected double-digit rebounds. The fifth-year forward came back with a vengeance as he picked up 19 against the Golden Eagles on Sunday and commented on how vital his contributions on the glass are for the Norse.

“It’s pretty big for our team, just me grabbing the ball and taking away their second-chance opportunities for shots and allowing us to get out in transition and on the run to get those fast points,” Brandon said.

Norse head coach Darrin Horn said postgame that the struggles over the past week lie partly on himself due to possibly over-scheduling his team, who have played four games over the past week following the trip to Florida and then having to come back home with the Thanksgiving traffic for a game on Sunday.

“Four games against really good competition in seven days, with a brutal travel day back, so no real day off,” Horn said. “What some of these guys did with their minute totals is really impressive, and I think it speaks to them and what we are capable of when we play with that level of competitiveness and mental toughness.”

The Norse move to 3-4 on the year and return to action at home on Thursday to begin conference play against Youngstown State. The game can be seen on Bally Sports Ohio and heard on ESPN 1530.