House party: Fans storm the court as Norse knock off Bearcats for first time ever 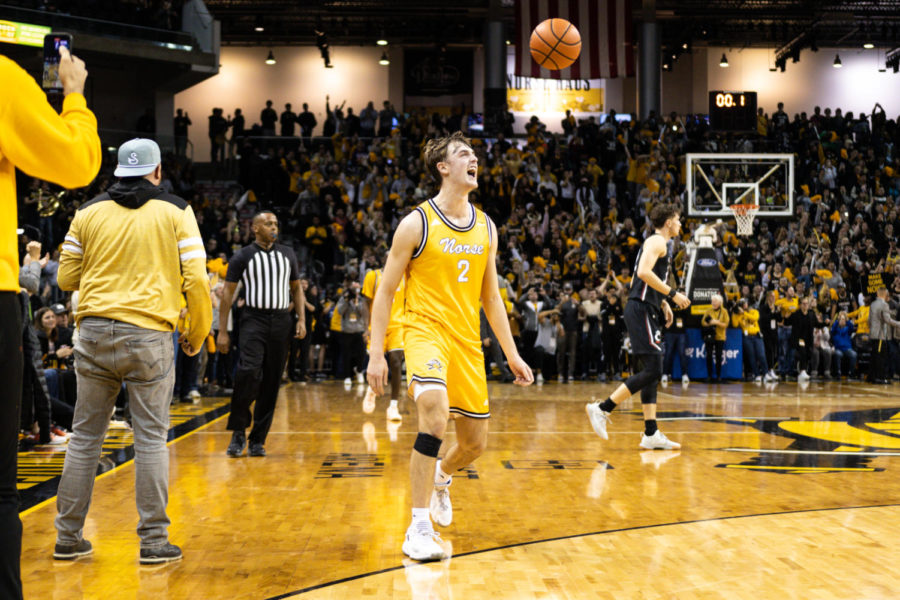 The term “program-defining win” isn’t one to be thrown around lightly. For a team to earn one of these, they must cultivate a certain culture as a winning attitude from players, fan support and perennial success is essential to even be able to utter the phrase.

The NKU men’s basketball team earned the right to say they picked up a program-defining win Wednesday night.

In front of the largest crowd in school history (8,503 total fans in attendance) that filled Truist Arena to the brim with deafening noise and the color gold, the Norse knocked off the Cincinnati Bearcats for the first time in program history by a score of 64-51, truly solidifying NKU’s status as a winning program that has been put together since the school’s move to the NCAA’s Division 1 level in 2015 despite multiple coaching, personnel and administrative changes.

It was a win that was punctuated by Marques Warrick’s 22 points that led all scorers and a gutsy Norse defense that held the Bearcats to just 11 points in the second half. Warrick said that the win and the ensuing court-storming from the student section meant a lot to a NKU team that earned a huge victory over a local school with a storied history.

“We knew coming in that we could compete and win against them, and that it would be a big win for the program,” Warrick said. “We’ve been needing a high major win for a long time now, and we went out there, competed and did what we were supposed to do.”

NKU head coach Darrin Horn said that the palpable atmosphere surrounding the court Wednesday was comparable to some of the biggest and best environments in his coaching career, also crediting former athletic director Ken Bothof and his successor Christina Roybal for helping to set up such an electric event.

“That’s what a big-time college basketball atmosphere looks like,” Horn said. “I’d be remiss to point out that it’s great for our team to play well and to win the game, but we don’t have that game if it’s not for commitment from administration.”

Shooting was a huge concern for the Norse coming into the game, but they would squash that concern right off the bat as Warrick and a healthy Sam Vinson knocked down back-to-back three-point shots to start the game for NKU. After the Bearcats and Norse traded a few buckets, the dynamic duo would strike again with Vinson sinking a pair of free throws and Warrick receiving an assist from Xavier Rhodes to go up 12-6 before the first media timeout.

Horn said that Vinson, who came off an ankle ailment that had him questionable to play Wednesday, had come to Horn at one o’clock in the afternoon that day and told him he was ready to start despite not touching the court with live repetitions in over a week.

“I just got told he was playing,” Horn said. “When we threw it up tonight and he went on the floor, that’s the first time he’s been on the floor with nine other guys in eight days. The guy is just an absolute warrior.”

The buckets kept flowing for the Norse throughout the half as Chris Brandon and Trey Robinson would join in on the fun, with the former notching six points in the half—four of them coming off offensive rebounds, of course—and the latter picking up a couple of big jump shots to keep the fast-paced Norse offense in business.

However, the Norse would find themselves going scoreless for three and a half minutes down the stretch in the first, allowing UC to climb back into the game. The Bearcats claimed their first and only lead of the game with 2:20 remaining as Kalu Ezikpe found the mark on back-to-back layups to make it a 36-34 game.

As expected for a rivalry game, things got chippy as the clock wound down in the half: with a little over six seconds left in the half in a 40-36 ballgame, Warrick would make an emphatic block on a Jeremiah Davenport layup attempt. Sam Vinson would drive the ball down the court on the ensuing possession, but would miss a layup attempt of his own after hard contact was made with a UC defender. Some words were exchanged between the two teams, but ultimately no fouls were called and the Norse and Bearcats would head back to their respective locker rooms with no punches thrown or fouls called.

But the second half is where the grit and determination of the Norse really shone through, as Warrick tied the game with two layups off the bat. Bearcats forward Viktor Lakhin missed two free throws on the following possession, as the NKU student section heckled him at the line after Lakhin drew their ire taunting them midway through the first half, and Brandon followed that up with four points to complete an 8-0 run and take a 44-40 lead. Lakhin would go just 1-4 on free throws for the remainder of the night.

Between the defensive performance and the lights out shooting from Warrick and Vinson, players like Brandon and Trevon Faulkner provided for the team through assists and rebounded down the home stretch to help claim the victory. Brandon, who currently leads all of Division 1 with 45 rebounds, commented postgame on another stellar performance as he continued his reign of terror on the boards by tallying 16 total rebounds on the night despite going up against a UC team that had the size and length advantage.

“Just the positioning and being physical with them,” Brandon said. “Just going up and grabbing [the ball], that was pretty much it.”

NKU moved to 2-1 on the year with the win and handed UC their first loss of the young season. The Norse look to continue their momentum on the road as they travel to Florida over the Thanksgiving break for the Florida Gulf Coast Showcase, beginning with a matchup against Florida Gulf Coast on Monday, Nov. 21. The game can be seen on FloHoops and heard on Fox Sports 1360.