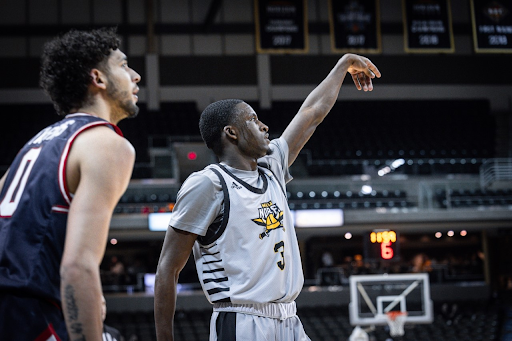 Despite a first half where they shot just 20% from beyond the arc, a Sam Vinson-less NKU men’s basketball team dug deep and made a furious comeback fueled by pinpoint perimeter shooting from Marques Warrick as the Norse defeated the UC Clermont Cougars by a score of 89-49.

The Norse offense was fueled by putbacks early on, as they trailed 13-9 and went just 4-11 from the field through the first six and a half minutes. The Cougars’ Gavin Rabe was on fire as he already racked up eight points and was two for two from three-point range. Chris Brandon was one of the lone bright spots for NKU to this point as he tallied six points and went up for four rebounds.

The struggles would continue throughout the half as the Cougars would continue to yo-yo the score out of the range of the Norse. After going 0-4 as a team for threes, Hubertas Pivorius would sink the first three for NKU at 12:03 to put them back within striking distance. An Imanuel Zorgvol free throw and a mid-range jumper from Brandon later, the Norse would claim their first lead of the ballgame with 9:50 left in the first half.

After playing tug of war for the lead for the next few minutes, a Trevon Faulkner layup would plant the Norse back in the driver’s seat with a lead they wouldn’t relinquish. The Norse also began to find the mark with their shooting, with Brandon and Faulkner having double digit point totals as they would extend their lead to 13 heading into the half.

NKU head coach Darrin Horn said that despite the struggles with field goal shooting, finishing after rebounding was a main focus in practice after the loss to Kent State, and the work put in by the Norse began to pay off in the first half.

“One of the things we wanted to do much better coming into the game was get points off of our offensive rebounding,” Horn said. “[Brandon] is the leading offensive rebounder in college basketball right now. That’s great, but we need to turn those into points, and we did not do a good job in the Kent State game, but tonight we did.”

Then the second half became the Marques Warrick show.

The junior guard and preseason Horizon League first team selection turned into a house of fire as he immediately sank three consecutive three-point shots out of the gate, matching the team’s total on 15 attempts in the first half.

“Most of it came from transition threes, they weren’t really guarding it and communicating on defense,” Warrick said of his sprint out of the gate in the second half. “I got some open looks, and I was being aggressive to start that half.”

The sudden swing in momentum seemingly reinvigorated everyone on the court wearing white and gold as the offense began firing on all cylinders. Contributions would come from all over as stellar defensive play from Zorgvol, Xavier Rhodes and Trey Robinson forced UCC to force shots down the stretch. All in all, the Norse out-rebounded the Cougars 47-27 and held them to just 21 points in the half.

Brandon would finish his night with 16 points, going eight for nine from the field and tallying 12 rebounds on the night. He talked about some of the key facets of the game that the Norse coaching staff have been preaching towards the players.

“We’ve been working on offensive rebounds, slowing down, seeing the floor and making the right plays, and I feel like that paid off tonight,” Brandon said. “We’ve been going back to some of those things and getting into the details that make us a good team.”

Vinson didn’t participate in the winning effort against the Cougars as he sat courtside in street clothes and a walking boot, coming off the heels of an incident where he tweaked his ankle Monday against Kent State despite returning later in that game. Horn said that the sophomore guard’s status is day-to-day for the time being.

The Norse return to action at Truist Arena in a highly anticipated matchup on Wednesday, Nov. 16 when they face the University of Cincinnati Bearcats. Tip-off is scheduled for 7 p.m. with the game set to be broadcasted on ESPN+ and Fox Sports 1360.