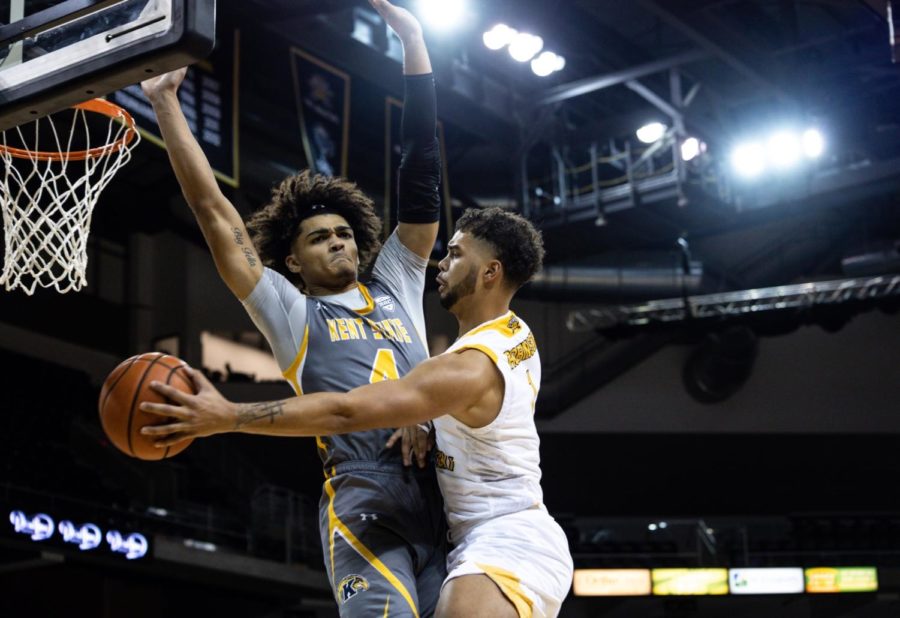 The Norse lost to the Kent State Golden Flashes by 77-54 Monday night.

Basketball in the Bluegrass returned Monday night as the NKU men’s basketball team took on Kent State for opening night in college basketball, but all the excitement was quickly dispelled after the Norse fell to the Golden Flashes by a score of 77-54.

The two teams would play tug-of-war early, with Golden Flashes forward Miryne Thomas dropping seven points to allow KSU to get off to a hot start en route to a 12-1 run through the first six and a half minutes of the game. The Norse would climb back into things a few minutes later by going on a tear of their own as Chris Brandon gave no quarter on defense and Sam Vinson sank a trio of jumpers to make it 15-12 at 9:22.

Kent State would pull back for another blow in their favor down the stretch as they grabbed a 27-14 advantage for their biggest lead of the half, receiving pinpoint threes from Thomas and VonCameron Davis along the way.

A scary scene unfolded with around six minutes left in the half when Vinson would be helped off the court after rolling his ankle trying to make a move on a Kent State defender, but he would return later in the half. Norse head coach Darrin Horn said that the injury most likely isn’t serious and shouldn’t be a concern moving forward.

Seeing their teammate go down seemed to fire up the Norse though, as they pulled the rope back into their corner with Marques Warrick picking up four points and a couple of assists. Fifth year transfer Xavier Rhodes would dazzle with his superior speed and ball handling and Trevon Faulkner would throw up a three to complete an 11-point run.

More back-and-forth play would ensue, but the Norse would end the half on the wrong foot after a foul by redshirt freshman Imanuel Zorgvol. The seven-footer from Suriname showed flashes of what he could do throughout the game on both offense and defense, but Horn said postgame that it’s the little things that still make Zorgvol’s development a work-in-progress.

“We saw exactly what he is tonight with some great offensive rebounds, and he had some good athletic plays off the rim,” Horn said. “But basketball-wise, in terms of some coverages defensively, he didn’t grab the rebound at the end of the half and then fouled… so there’s some basketball stuff like that where he’s going to learn, grow from, and get better.”

The second half was brutal to the Norse, as the proverbial rope was practically ripped from their hands. After Faulkner would hit another three to begin the half, the Golden Flashes would pull out to another 11-0 run and never look back, keeping their lead in the double digits for the remainder of the game. Reigning Mid-American Conference player of the year Sincere Carry would have an outrageous half: after scoring five points in the first, he’d score fifteen more in the second on nothing but rainbow three-pointers that just seemed to rain from the rafters of Truist Arena, allowing the Golden Flashes to stroll to a blowout victory.

Horn commented on his team’s performance offensively, as the Norse were 18-for-60 from the field on the night, including shooting just 18.5 percent from the three-point stripe.

“We did a really poor job tonight doing the things we needed to do well to play good offensively,” Horn said. “The biggest part of that, in a word, is the aggressiveness we played with. I thought we passed up shot after shot after shot.”

One of the bright spots of the night for the Norse was Chris Brandon’s play on the boards, as the sophomore forward collected 17 total rebounds on the night. He commented after the game on his performance and said that the physicality of the more experienced Kent State team was just another day at the office for him.

“I feel like I was more physically athletic than them, that’s why I came up with so many boards,” Brandon said.

The Norse return to action in Truist Arena on Saturday, Nov. 12 when they take on the UC Clermont Cougars at 2 p.m. The game can be seen on ESPN+ and can be heard on Fox Sports 1360.