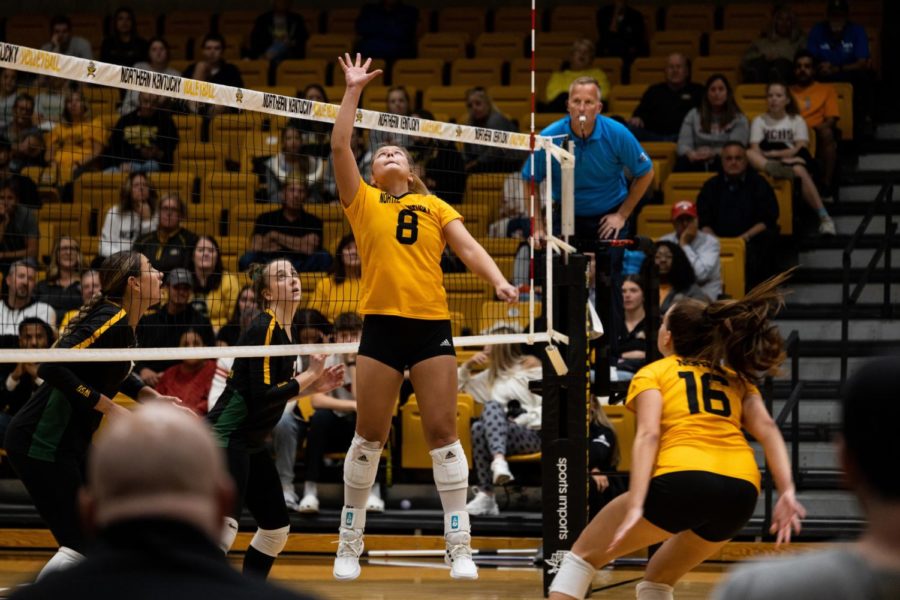 The NKU volleyball team suffered a tough loss on Tuesday, as Horizon League leader and blood rival Wright State walked into Regents Hall and blanked the Norse by beating them in three sets.

It was a back and forth beginning to the contest as the Norse and Raiders traded points in the first set. NKU would tie the set at 24-24 with four unanswered points. Sophomore Joy Banks and senior Reily Briggs recorded two vital kills for the Norse to get them in a position to take the set. The two teams would trade blows once again to even the score at 25, but errors from junior Alie Siefke and sophomore Sequoia Hunt would prove costly, handing the first set to Wright State.

The Raiders would pull out to a quick 11-5 lead in the second set and wouldn’t look back as WSU’s Taylor Bransfield recorded three kills. The Norse would climb their way back into things though, getting within four points at 15-11 as grad student Anna Brinkman would record two kills on the run. However, the Raiders would go on a big run down the stretch, scoring seven unanswered and taking the set 25-15 to go up two sets to none.

The two teams would engage in another back-and-forth battle early in the third, with NKU taking a 9-7 lead before Wright State would roar to life again. At the 9-7 mark, Wright State would score seven of the next eight points recorded as Megan Alders would score two kills and Bransfield and Callie Martin recorded a kill each. The Norse would valiantly try for another comeback as they pulled within two at 18-16, but WSU would outlast NKU in another shootout down the stretch for a 25-23 win.

The loss puts the Norse at 5-11 overall on the year and 3-2 in conference play, setting them at fifth place in the Horizon League. The Raiders improved to 13-3 overall and 5-0 in the conference, keeping them at the top of the pack.

The Norse look to get back on track in conference play as they hit the road towards Indianapolis on Friday, Oct. 7 to face IUPUI.