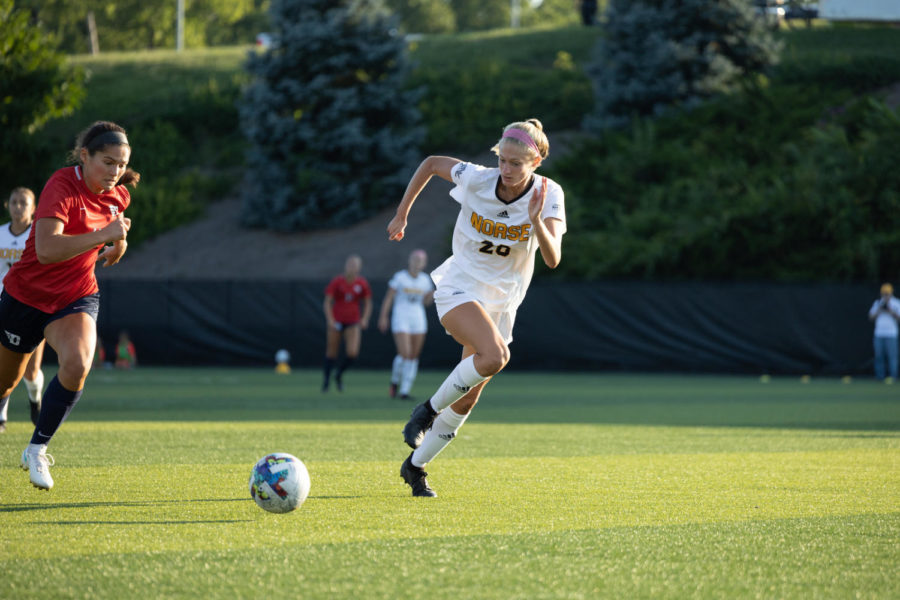 NKU women’s soccer team faced off against Dayton on Thursday.

The NKU women’s soccer team opened the newly christened Scudamore Field for the 2022 season on Thursday, but went on to drop a non-conference matchup against Dayton by a score of 3-0.

The Flyers opened up the scoring early, as in the ninth minute, as junior forward and former Atlantic 10 Offensive Player of the Year Itala Gemelli chipped in an assist from junior midfielder Diana Benigno. Gemelli would strike again at the 26:19 mark, getting a good touch off a pass and scoring from within the penalty area.

The Norse would have some opportunities to score early on as well but were unable to capitalize. In the 39th minute, freshman forward Shannon Crogan would have an opportunity to score with an open lane to the goal but sailed her shot wide to the left. Annie Green would also record a shot on goal in the first half, but Flyers goaltender Madelyn Dewey would prevent any damage from being done.

Dayton refused to relent with their defensive presence in the second half, with Dewey making another diving save on the only other shot on goal the Norse would record for the rest of the game by Emma McSwigan. Flyers midfielder Jessica Sheldon would cap off the scoring by recording another goal in the 50th minute off Benigno’s second assist of the night.

Despite the result, Norse head coach Bob Sheehan said that he was pleased with the play of his freshmen players and praised all of them, specifically Crogan and Emilie Doersching. He said he looks forward to their continued development as the season progresses.

“Doersching is obviously very pacy, she can stretch defenses,” Sheehan said. “She’s got a really high work rate, so I thought she had some nice moments. Shannon’s strong on the ball and has a powerful shot.”

With the loss on Thursday, the Norse fell to 0-2 on the season, with last week’s season opener against Cincinnati also resulting in a loss. Sheehan commented that these types of results obviously sting, but the way the schedule is built gives an opportunity for the team to prepare for tougher opponents, especially as the conference schedule approaches.

“We scheduled this way for a reason,” Sheehan said. “The goal is that we learn and grow, and then when Horizon League play starts, we’ll be prepared for the Horizon League. We’re trying to develop the team for the long run.”

The Norse return to action with another non-conference matchup on Sunday, Aug. 28, as they take on Louisville at Scudamore Field at 7 p.m. The game can be seen on ESPN+.