Gerl shines in game one, but Norse falter late in second game of doubleheader vs. UIC 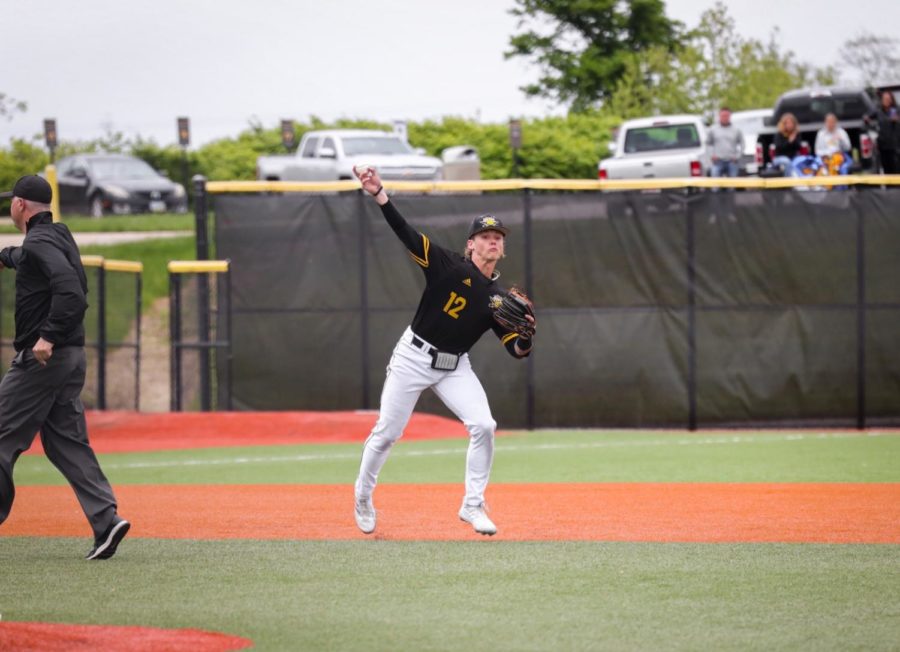 Gallery|6 Photos
Emory Davis
Norse shortstop Noah Fisher makes a throw to first during game one of NKU's doubleheader with the UIC Flames on Saturday.

The NKU baseball team’s performance during their split of a twin-set against the UIC Flames on Saturday evening told the tale of two versions of the Norse over the course of the two games: the first showing when they’re at their best, with the starting pitching taking full control and allowing the offense to breathe easy in a 7-1 win, and the second showing a struggling bullpen looking to find some stability in a 11-7 loss.

Left-hander Nate Peterson would have a topsy-turvy afternoon on the bump for the Flames. One inning he would struggle with his command, the next he looked like he simply couldn’t be touched.

This was no more apparent than in his first and second innings of work. Facing his second hitter of the game in Norse right fielder Treyvin Moss, he allowed a home run to straightaway center field on a 1-0 count to open the scoring. Facing NKU’s five-six-seven hitters in Brennan Gick, John Odom and Liam McFadden-Ackman in the second, however, was no sweat; Peterson recorded an immaculate inning by striking out the side on nine pitches.

But UIC’s lefty would continue to struggle in the third, loading the bases full of Norse after hitting Brandon Tucker with a pitch, allowing a single to Manny Vorhees and walking Moss. Noah Fisher would cash in on the opportunity by driving a two-run double to left center field, putting NKU up 3-0 early.

The Norse offense would pick up again in the bottom of the sixth when Ryan Glass, Gick and Odom all reached to load the bases once more with no one out. A single by McFadden-Ackman would bring Glass in to score, and with two down in the inning, a double by Vorhees would clear the bases, putting the offense’s exclamation point on a 7-1 victory for the Norse.

NKU’s own lefty starter Ben Gerl would have a much better go at things, allowing his only run of the day in the top of the sixth when Flames first baseman Breck Nowik hit an RBI single that scored shortstop Ryan Lin-Peistrup, who ended up being the only man Gerl would walk over his seven innings of work on his way to his third win on the season. Gerl entered Saturday having only allowed four runs over his past nine and two-thirds innings of work, and his complete game masterpiece was punctuated by his ten strikeouts, just two shy of his career high.

“I trust my defense and I trust my catchers, that’s the biggest part of it,” Gerl said of his keys to success. “You can’t strike out everybody, nobody in the history of the game’s ever done that. The guys behind me played really well and we got big outs when we needed them.”

Norse head coach Dizzy Peyton would praise the performance of Gerl and his team’s offense in the post-game press conference, saying it gave his bullpen a much-needed rest to allow for more mileage during game two of the doubleheader.

“We’ve had a depleted bullpen, a depleted pitching staff in all reality,” Peyton said. “For him to go out and do that today and for the offense to step up as well was really good.”

The Norse would start hot in the first once again, with Vorhees leading off the bottom half by taking the first pitch he saw from UIC’s game two starter Tyler Ingram over the right field wall for a solo shot. They would have their second run on the board three batters later and with one out when Glass smacked an RBI double down the right field line to bring Fisher all the way around from first. An RBI double from catcher Zack Minton and a single from Vorhees that brought in another in the second would put NKU ahead by four early.

An unusual sequence of events would swing the momentum in favor of the Flames in the fifth, when with runners on second and third, left fielder Bryan Rosario grounded out to Glass at first. Glass would try to catch center fielder Bobby Grimes sleeping off of second, but the throw would sail into left field, allowing right fielder Adam Weed to score from third.

The Norse would find more trouble in the top of the sixth when starter Kaden Echeman and reliever Bryson Lonsbury would combine to walk five consecutive batters, with Lonsbury allowing another run to score when Weed grounded into a double play. The Norse would get insurance in the bottom half off of an RBI double by Odom, who advanced to third and would score on a sacrifice fly by game two designated hitter Griffin Kain, but a three-run home run by Nowik off of NKU reliever Andrew Mulhern would knot the game at six.

UIC took the lead in the eighth when Lin-Peistrup hit an RBI double to left center, and they never looked back. They would add four runs of insurance in the ninth, with their only blemish coming on a McFadden-Ackman pinch-hit home run to put the final score at 11-7.

The Norse head on the road Wednesday to face the Cincinnati Bearcats at UC Baseball Stadium for a game that can be seen on ESPN+. They return home to the Bill Aker Baseball Complex on Sunday, May 15 when they face off against Youngstown State in another Horizon League twin bill.