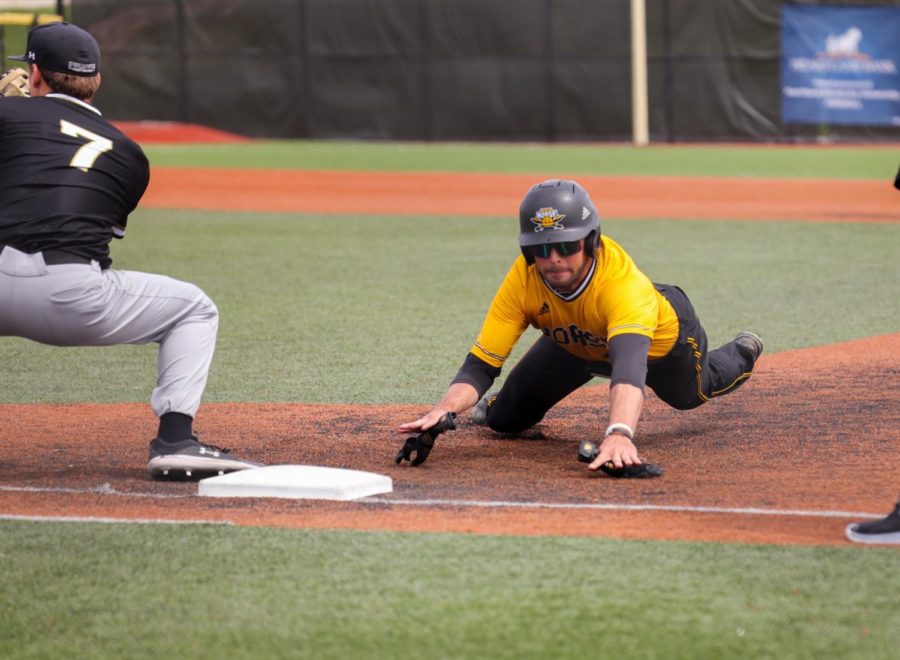 NKU outfielder Griffin Kain dives back to first base on a pickoff attempt against Purdue Fort Wayne on Friday, April 15.

Offense was aplenty in the rubber match of a three-game Horizon League set between the NKU baseball team and the Mastodons of Purdue Fort Wayne, just not the offense that the Norse would have liked, as they dropped Saturday’s game by a score of 10-5.

Norse starter Kaden Echeman would find himself in trouble early, as Mastodons third baseman Jack Lang would punch a single through the left side with one out, bringing up Ben Higgins to smack a home run to straight away center field. Cade Fitzpatrick would reach on an error by the out-of-position Liam McFadden-Ackman at third base as he filled in for Manny Vorhees, who was behind the plate for the injured Zack Minton. Echeman would tightrope his way out of the inning, getting Alex Evenson to strike out looking and forcing a flyout from Garrett Lake.

The hits kept coming in the top of the second though; with Cade Nelis on second and one out, Jarrett Bickel would double to left center field. It initially appeared that the Norse had thrown out Nelis by a step on a picture-perfect relay at the plate between left fielder Brennan Gick, shortstop Noah Fisher, and Vorhees, but third base umpire Darnell Ray ruled that McFadden-Ackman had obstructed Nelis’ path between third base and home plate, therefore awarding Purdue Fort Wayne’s designated hitter the run. Norse head coach Dizzy Peyton would come out to question the call, but to no avail.

There wouldn’t be much relief from the shelling in the third either. Nick Noble, who finished the second for Echeman, allowed an RBI single to Lake and a sacrifice fly by Brian Erbe. The Norse would get one run back in the bottom half off of a single by Vorhees that scored McFadden-Ackman to make it a 5-1 affair, but they weren’t able to cash in on any more opportunities in the inning.

Michael Bohlen would take over for Noble in the fourth, but after giving up a two RBI triple to Mastodons right fielder Isaiah Hart and another RBI to Lake on a double down the left field line, he would be pulled in the middle of an at-bat against Nelis due to what appeared to be an injury. T.J. Graves would take over and complete the inning for NKU, getting Nelis to strike out swinging and Erbe to ground out.

One thing is for certain about this Norse offense, though: they don’t quit. Brennan Gick would start the bottom of the fourth with a base hit to center field and would advance to third on a double to left by Ryan Glass. A single by John Odom brought both runners in to score, making it an 8-3 game by the end of the inning.

The momentum would pick back up in the fifth, as Treyvin Moss singled down the right field line, subsequently stealing second and advancing to third on a groundout by Fisher. An RBI single by Gick would bring Moss the last ninety feet to the plate and make it a four run deficit for the Norse.

But the Mastodons would ensure their lead was safe in the seventh, as after reliever Zach Hagis walked Nelis to begin the seventh, Blaine Walters would allow a two-run, no-doubt bomb over the left field fence by Bickel to make it a 10-4 ballgame. The Norse would get one back on a dinger off the bat of Fisher, but it wouldn’t be enough in the end for a victory.

Peyton reflected on the weekend for the Norse and the inability to take the series in a post-game press conference, saying that the Norse need to rebound quickly for the road ahead.

“We struggled at the plate and we just weren’t able to get it done,” Peyton said. “Now we’ve got to lick our wounds and get back to it.”

The Norse head back on the road this week, starting with a Tuesday non-conference game against Butler, then traveling to Fort Wayne in an attempt for revenge against the Mastodons in a Friday doubleheader, with the trip concluding in Dayton on Saturday for another doubleheader against Wright State. NKU returns to the Bill Aker Baseball Complex on Wednesday, April 27 at 3 p.m. to take on the Colonels of Eastern Kentucky University.