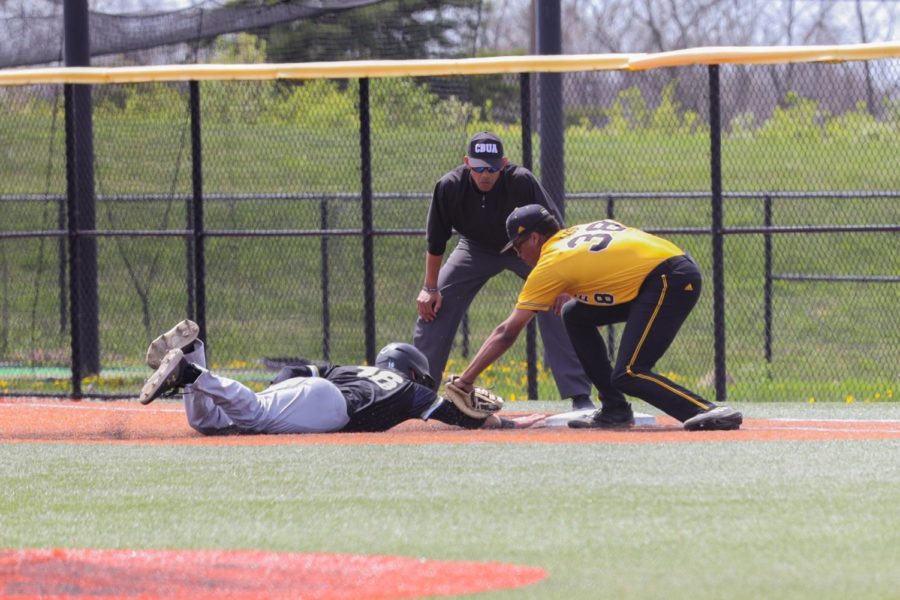 It was as if the baseball gods and Mother Nature were looking fondly upon the Bill Aker Baseball Complex on Friday, because there was finally some decent weather for baseball: sunny, but with the wind blowing towards the outfield. But there was also the thrilling second game of a Horizon League series between the Northern Kentucky Norse and the Purdue Fort Wayne Mastodons that had yet to unfold.

The Mastodons would pick up the first baserunner of the game when shortstop Jarrett Bickel was hit by a pitch from Norse starter Kyle Klingenbeck to lead things off, but that would soon be a moot point. After two flyouts from Jack Lang and Ben Higgins, Bickel found himself picked off by Klingenbeck and tagged out in a rundown between first and second to end the inning.

Business would pick up in the bottom of the second for the Norse, as Noah Fisher reached base safely and advanced to second on an error by Purdue Fort Wayne second baseman Brian Erbe. Later in the inning, Brandon Tucker was hit by a pitch from Mastodons starter Mitchell Spencer with two outs in the inning, setting the stage for NKU catcher Zack Minton, who had entered the game with only three hits in 40 plate appearances this year. After just fouling a 2-2 pitch down the left field line that easily cleared the fence, he would put another one over – this time in fair territory for a three-run homer to put the Norse in front early.

The Norse found themselves threatening again with two down in the third after Brennan Gick walked and Noah Fisher doubled to left field. Norse head coach Dizzy Peyton was forced to put on the stop sign for Gick after quick relays from the Mastodons’ defense, and John Odom was unable to capitalize on the opportunity as he popped out to third base.

Up until the seventh inning, the pitching for NKU was nearly flawless, with Klingenbeck putting up six complete innings of shutout baseball, keeping Purdue Fort Wayne out of the hit column until the fifth inning when Garrett Lake hit a double to right field. The Norse righty would only allow one more hit on the day.

However, despite finding success through the first six frames, the seventh would prove to be challenging for the Norse staff. After falling behind to a 2-0 count on Alex Evenson, Klingenbeck would hit the Mastodons first baseman with a pitch and went on to plunk the next two hitters with consecutive pitches to load the bases.

Klingenbeck would subsequently be pulled for reliever Andrew Mulhern, who after recording the first out of the inning on a foul out by Luke Miles, would hit Purdue Fort Wayne’s nine-hole hitter in Erbe to force in a run. Bickel would walk to draw in another in the next at-bat, and after striking out Lang, Mulhern would give up a two RBI single by Higgins that put the Mastodons in front. Bryson Lonsbury would come on to finish the inning for Mulhern when he got Cade Fitzpatrick to fly out to center field.

The Norse bats went quiet for the next two innings, but Lonsbury pitched the eighth and ninth without allowing a run to keep the deficit at one for one of the top offenses in the Horizon League. Noah Fisher would lead off the bottom of the ninth by walking, and Odom would sacrifice himself by bunting NKU’s shortstop over to second. Left-hander Ryan Robinson would come on to pitch for the Mastodons, leading to reigning Horizon League Batter of the Week Liam McFadden-Ackman to pinch hit for Griffin Kain and singling to right field, moving the tying run another ninety feet away from home plate. Righty Brendan Reid would then come on to strike out Tucker and allow a walk to Lucas Gulczynski, who pinch hit for Minton.

This would turn over the lineup to the top of the order, and the table was set for third baseman Manny Vorhees for a situation that every baseball player dreams of; two outs, bases loaded, down one. But instead of going for the glory of swinging for the fences, Vorhees was set on simply putting the ball in play.

“You’ve just got to do your job,” Vorhees said of the moment. “We prepare for these situations.”

And Vorhees would deliver. A short blooper off of his bat would fall in between Higgins and Bickel in left, scoring McFadden-Ackman and Fisher to seal the 5-4 victory and even the series between NKU and Purdue Fort Wayne.

The victory makes the Norse 7-2 over their last nine games and moves them to 7-6 in conference play, good for third in the Horizon League. Peyton commented on his team’s recent success in the post-game interview.

“A win’s a win,” Peyton said. “We just try to play hard and piece a bunch of quality at-bats and quality innings together, and when we do that, we could come out on top.”

The Norse and Mastodons will settle the score and conclude the series in the finale on Saturday at noon in Highland Heights. The game can be seen on ESPN+.