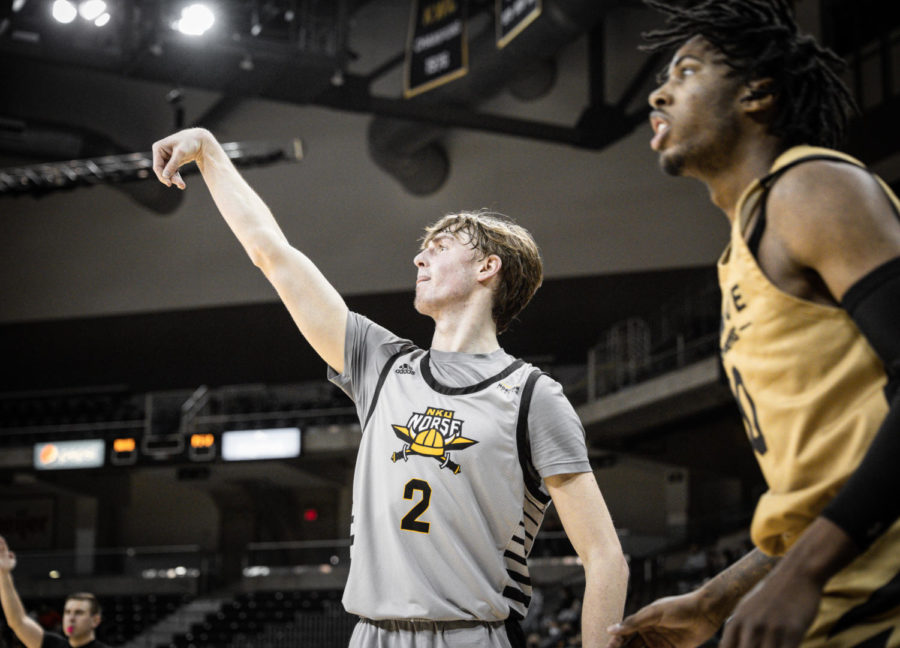 In a mid-major program that is heavily built upon the foundation of player development and building talent over tenure, it’s an anomaly to see a freshman get as many opportunities to shine as Sam Vinson had in his first year at NKU. But then again, Vinson’s talent level itself is an anomaly. It’s what made him Kentucky’s Gatorade 2021 Player of the Year and a key component of Highlands High School’s run to the state championship last year.

Norse head coach Darrin Horn said that the 6’5” guard’s qualities and talent that drew Horn towards recruiting him translated excellently on the floor for Vinson’s freshman year.

“He’s a rare combination of a big, athletic guard that can do a lot of basketball things, but he’s also got a tremendous basketball IQ,” Horn said. “He has outstanding competitive character and he’s all about winning.”

Those qualities are a huge part of what helped Vinson earn various honors, including the Horizon League’s Freshman of the Year award for the 2021-22 men’s basketball season, as well as seven Freshman of the Week honors over the course of the year. Nationally, he was selected to the Kyle Macy All-American team and was a finalist for the top freshman in all of college basketball. His play also made him a factor in the Norse’s run towards the Horizon League Championship game.

But from Vinson’s perspective, adjusting from high school to the college level at first wasn’t as simple as “plug-and-play.” He said the biggest challenge he struggled with during the offseason was the difference of speed between the two levels of play, and he didn’t quite see the floor like he used to.

“The flow of the college game is a lot faster and a lot more physical,” Vinson said. “At first, I was struggling trying to see the floor like I used to and just finding my spots, finding open shots.”

But Horn was steadfast in his persistence and confidence in Vinson. The potential that he showed in high school and over the course of summer workouts began to stand out more and more over time, and Vinson began to make the plays that were needed out of him.“A lot of guys that are good players coming out of high school are guys that are ‘good’ as it relates to making plays for themselves,” Horn said. “Sam is a guy who makes plays for others. He distributes, rebounds, plays great defense, blocks shots, so we like all of those things.”

Over the season, that sentiment would shine through. Vinson was the only player on the team to start all 32 games and averaged 11 points, four rebounds, three assists and two steals while playing nearly 33 minutes per game. His 66 steals were good for twelfth nationally, while he also broke the Horizon League’s freshman record in the category.

Coming up clutch in the big moment was another thing that made Vinson vital to the success of the Norse this year. Vinson scored in double figures nearly 20 times throughout the season, as well as scoring 20-plus points thrice, including a huge 24-point performance in a 74-70 overtime thriller against the University of Illinois-Chicago; a conference win that would prove to be vital for NKU down the stretch.

“The bigger the moment, the better he is,” Horn said of Vinson’s ability in the clutch. “He has the ability to impact the game in a lot of different ways.”

From a teammate’s perspective, sophomore guard Marques Warrick said that the confidence and reliability that Vinson and others grew to have in him over the course of the season made him reliable in a pinch.

“When you see someone as confident in the way they carry themselves on the court, it puts the confidence in you, too,” Warrick said. “You’re confident in them that they’re going to make a play and that they’re going to make the right decision. We know his talent level and what he’s capable of, but confidence level is the main reason why we trust him.”

One of the biggest reasons Vinson said he came to NKU wasn’t just for the caliber of the coaching staff and the quality of competition  the Horizon League offers, but also the ability to stay closer to home.

“I wanted my family to be able to come out and attend the games and have my community around me come out and support me,” Vinson said.

Even with the honors that he received this season and although the Norse’s campaign ended in the agony of a final-second loss to bitter rival Wright State, Vinson said his focus is on the future of the team and his own development. He said that he’s more driven than ever to continue to improve his game this offseason.

Vinson separated himself from the rest of the freshman class in the Horizon League and beyond during the 2021-22 season. Now he looks to further his development this offseason and stand out even more.