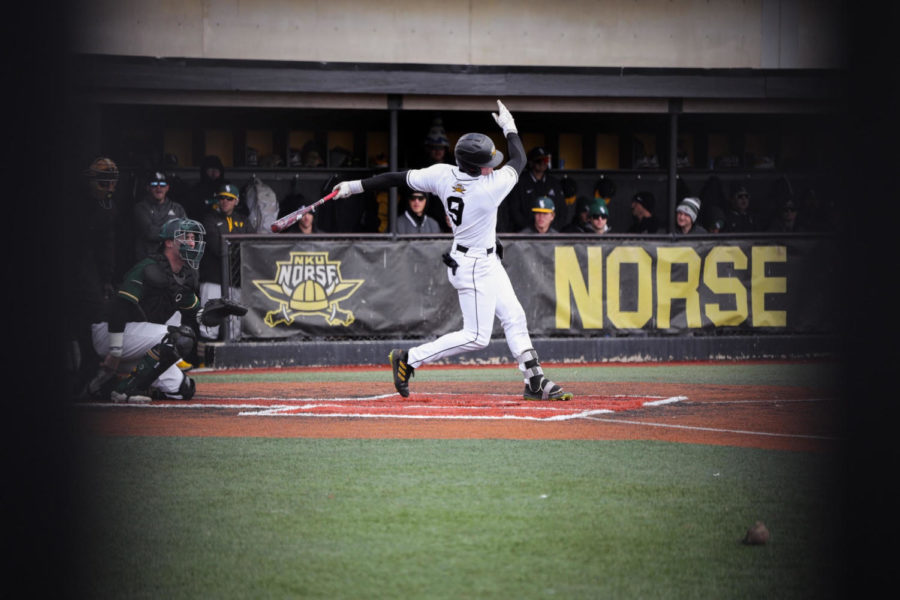 NKU infielder Liam McFadden-Ackman follows through on a swing against Wright State.

Heading into a new week, the NKU baseball team had already been fighting against fortune in just about every way possible. From coming into their weekend series against Milwaukee with only 24 total active players on their roster, to losing catcher Jayden Wakeham and Noah Fisher to injury, and weather pushing their Saturday affair to a snowy Sunday afternoon for a doubleheader. They would fight through all of that to take the final two games of the series, proving to head coach Dizzy Peyton what his team was made of.

“They’re gritty,” Peyton said of his team. “They care about each other, and they don’t really care who the opponent is.”

But fortune wouldn’t favor the bold Norsemen on Tuesday. The rainy, windy conditions would foreshadow their fate against the University of Dayton in a midweek non-conference matchup between the Flyers and the Norse.

Starting pitcher Nick Noble would only last an inning and a third against Dayton’s offensive onslaught, giving up six runs off of four hits and three walks. Three of those runs would come in the first, with the big blow of the inning coming from Flyers first baseman Marcos Pujols when he belted a mammoth two-run home run over the right field wall. Another big fly would come off the bat of center fielder Jose Martinez’s bat in the top half of the second, this time on a first pitch sent down the left field line.

The nightmare second inning would continue despite reliever Tyler Murphy coming in to assist with one out in the second, inheriting baserunners Omar Daniels and Ben Jones in the process. After a Pujols single through the shift to right field to load the bases, a walk to Flyers left fielder Henry Strmecki and a subsequent wild pitch to bring in Jones would close the book on Noble’s afternoon. Murphy’s outing wouldn’t last much longer, as he gave up two more on a Jay Curtis single and was pulled after walking Keagan Calero.

With still only one out in the inning, the Flyers would then set their sights on T.J. Graves with two on. Dayton right fielder Alex Neff would slap an RBI single into right field, and the previously struggling Martinez, who came into the game with an .062 batting average, socked a three-run bomb out of the park to complete the nine-spot in the second and give UD a 12-0 lead. Graves would go on to finally finish the inning and would throw another two and a third, recording a strikeout in the process.

Although the normally potent Norse offense struggled much of the game, they would continue to fight, putting up seven hits on the day. Liam McFadden-Ackman would record an RBI on a sacrifice fly in the bottom half of the fourth that scored Brennan Gick. Dayton would get one more when Jones scored on a wild pitch to Curtis to put NKU’s deficit back up to twelve, but a two-RBI double by Treyvin Moss would make it a 13-3 game.

The Flyers would add more insurance runs in the top of the sixth when Daniels hit an RBI groundout back up the middle off of Norse pitcher Drew Switzer, then two more in the eighth by way of a two RBI double by Jones. The Norse would go down without adding another run, losing 16-3.

As well as pointing out the strong will and potential that his team has, Peyton would also acknowledge the long way his club still has to go in his post-game press conference.

The Norse will resume their Horizon League slate this weekend with a three-game series at Youngstown State, with the first game set for Friday at 5 p.m.