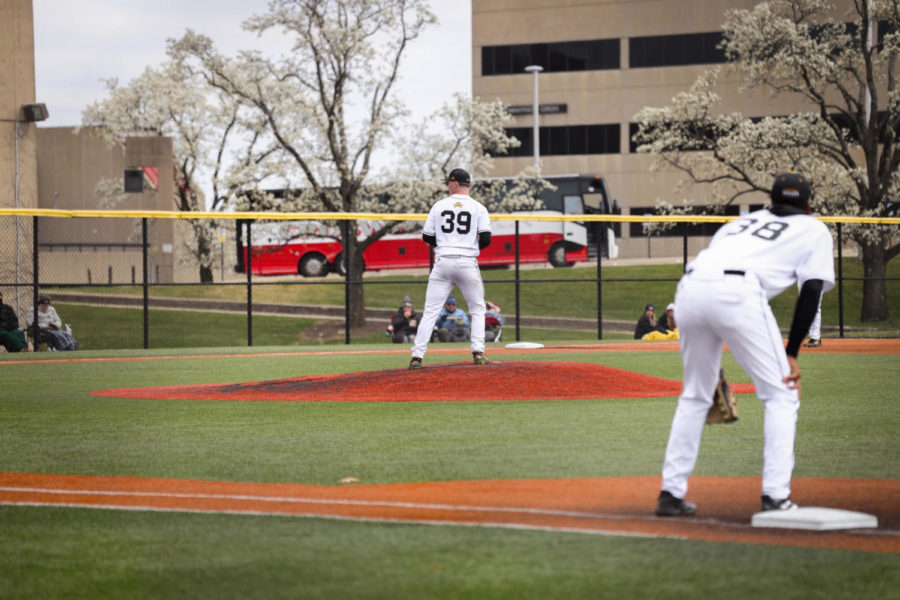 On what proved to be another blustery day at Friendship Field, the NKU baseball team fell to Wright State 17-10 to fall on the wrong end of a weekend sweep and extend the Norse’s losing streak against the Raiders to 16.

The Norse would draw first blood in the bottom half of the first, with Michael Hall doubling to right-center field to score Treyvin Moss. Hall has recorded at least one hit in 10 of his last 11 games played, boosting his batting average to .420 on the year, good for the highest in the Horizon League.

“I’ve been trying to get quality at-bats, we’ve been preaching that a lot lately,” Hall said of his recent success. “I keep telling myself to just try to hit the ball hard and compete.”

The lead didn’t last for long though, as the Raiders would strike back in the second with runs batted in coming from a groundout by shortstop Justin McConnell and a single by left fielder Andrew Patrick, giving Wright State a lead they wouldn’t relinquish for the remainder of the ballgame. A three-run home run by designated hitter Zane Harris in the third would extend their lead to four runs.

The Norse pitching staff’s struggles wouldn’t be contained to just starter Kaden Echeman. He would be lifted in favor of right-hander Nick Noble in the top of the fourth with two outs after giving up another run. Noble would work his way out of the inning with a runner on third, but he wouldn’t be as fortunate in a nightmare of a fifth inning for NKU.

Noble found himself in a bases-loaded jam after giving up a double and two walks and hit the next two batters, then allowing a single to Julian Greenwell to score one and end Noble’s outing. Andrew Mulhern would be the next man up, giving up two more runs on a wild pitch and sacrifice fly, with another coming on an error by shortstop Liam McFadden-Ackman to make it a 12-1 ballgame.

Much like on Saturday, however, the Norse still had fight left in them. Jayden Wakeham brought Hall in to score with two runners on in the sixth, and back-to-back walks to McFadden-Ackman and John Odom would bring another in. A bunt single by Brendan Tucker would bring another runner around, and two more were plated on a Treyvin Moss double. One last runner would come in on a sacrifice fly to left field by Brennan Gick, but that was all the Norse would get out of their rally, moving it to a 12-7 affair.

Wright State would add two more in the seventh on a home run by Anglin, but NKU would get that run back on another RBI in the bottom of the eighth by Gick. The Raiders would put the game even more out of reach for the Norse in the ninth with a double by Harris and a two-run homer by Jay Luikart. The Norse would try to rally in the ninth once again by scoring two more, but it was too little, too late.

Although the pitching continues to struggle, head coach Dizzy Peyton says that the offense is right where they need to be to find success this year.

“It’s just a culmination of putting together good, quality at-bats,” Peyton said. “If we do that, we can put up runs against anybody.”

The Norse conclude their homestand on Tuesday with a matchup against the Eagles of Morehead State at 3 p.m. at the Bill Aker Baseball Complex.