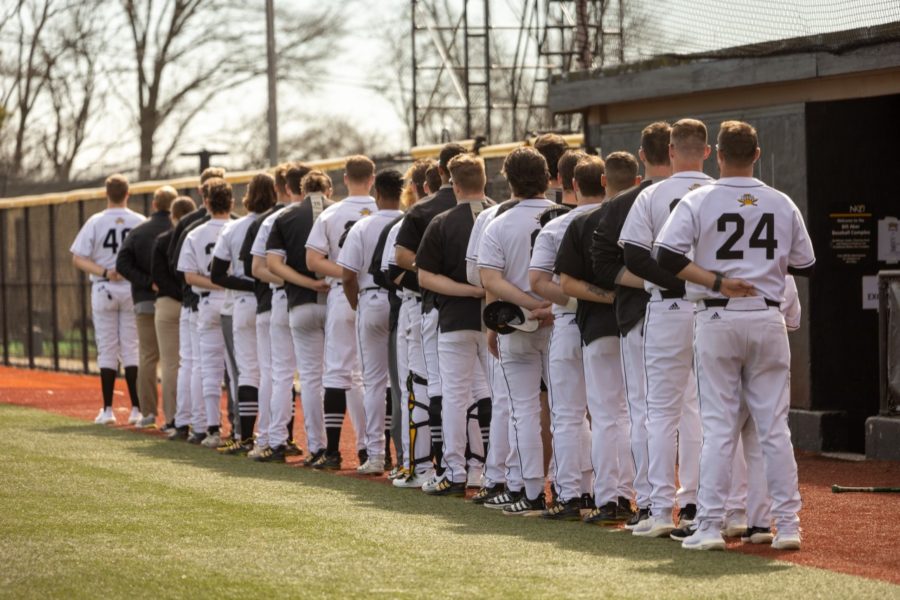 The NKU baseball team prior to their game against Butler on Tuesday, March 1.

The NKU baseball team’s offense put on a laser show to close out their non-conference weekday homestand with a 16-6 rout of the Xavier Musketeers on Wednesday.

Left-hander Ben Gerl started the game for the Norse by giving up a double to Xavier catcher Jerry Huntzinger, who stole third base the following batter and would be cashed in on a single by first baseman Luke Franzoni. Gerl would finish the inning without a hitch and close out his day by only allowing a walk in the second inning before retiring the side.

NKU’s offensive torrent would begin in the bottom half of the first when Treyvin Moss put the first pitch he saw from Musketeers right-hander Luke Hoskins into right-center field for a double. After Manny Vorhees was hit by a pitch, Ryan Glass would put the first three runs on the board for the Norse by depositing a ball over the left field fence for a home run. Halligan’s brief day would conclude after walking Liam McFadden-Ackman, but Xavier’s move to bring in Miles Halligan in relief wouldn’t help much, as John Odom and Brennan Gick hit back-to-back round trippers to extend the lead for the Norse.

The second inning didn’t bring much relief for the Musketeers, as Noah Fisher hit a homer of his own in the inning after a single by Glass. Solo bombs ensued in the following innings, with Gick’s second of the day coming in the third and Vorhees’ second of the year coming in the fourth making it a nine-run ballgame.

But the Musketeers wouldn’t quit. Franzoni would follow up a single by shortstop Jack Housinger by hitting a two-run bomb off of Norse freshman Kaden Echeman in the top of the fifth. Echeman would hand the ball to Tyler Ollier in the following inning after giving up a double to Xavier right fielder Aedan Anderson, who advanced on a wild pitch by Ollier and scored on a groundout by second baseman Eddie Rivero.

The Norse bats would resume their carnage in the bottom half of the seventh when McFadden-Ackman doubled, scoring Fisher from first base. Odom followed with a walk and Gick was hit by a pitch, setting the stage for three consecutive base hits, starting with a two-run single by Brandon Tucker. Moss would follow with a two-run single of his own and Vorhees would cash in one with his base knock.

Xavier would muster two runs in the ninth on a two-run home run by designated hitter Jeff Holtz off NKU reliever Drew Switzer, but that would be the last gasp for the Musketeers. Switzer closed out the game with two strikeouts and a groundout to complete the home sweep for the Norse.

The Norse travel to Charleston, SC, on Friday to start a three-game weekend set against The Citadel. Coverage of the first game against the Bulldogs begins at 5 p.m. on ESPN+.