Norse stave off comeback to win home opener against Butler 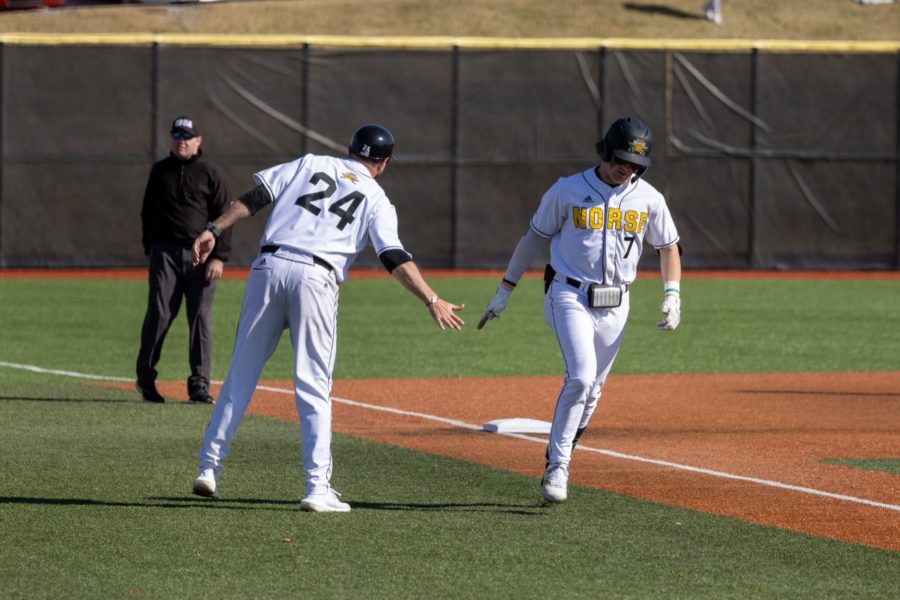 NKU infielder John Odom (7) rounds third base after a home run against Butler.

The NKU baseball team opened up their home schedule at the friendly confines of the Bill Aker Baseball Complex on Tuesday by earning a 13-8 win in an offensive shootout against the Butler Bulldogs.

Kyle Klingenbeck started the game and put in an inning of work for the Norse, getting Bulldogs shortstop Travis Holt to foul out to right field before walking the next three hitters to load the bases. Klingenbeck would tightrope his way out of the jam though, striking out catcher Garret Gray and right fielder Scott Jones to end the inning.

The Norse got the scoring started by exploding in the second inning for a five-run rally that started with back-to-back home runs for second baseman John Odom and designated hitter Michael Hall. After consecutive groundouts by Griffin Kain and Brandon Tucker, right fielder Treyvin Moss roped a double down the right field line, followed by third baseman Mason Vorhees’ own two-bagger that would cash in another run. Bulldogs starter Brandon Haggerty was pulled to give way for right-hander Luke Zmolik, who gave up the third home run of the inning, a two-run bomb by first baseman Ryan Glass.

The Norse offensive onslaught would continue in the bottom half of the third with a two-run single by Moss that brought Hall and Odom in. Haggerty was lifted for John MacCauley, who threw a wild pitch that center fielder Brandon Tucker took the plate on to extend NKU’s lead to 8-0.

Then it was the Bulldogs’ turn to chip away. After a quiet couple of innings for Norse reliever Bryson Lonsbury, Butler first baseman Lukas Galdoni would reach on a fielder’s choice in the top of the fourth, advancing on a wild pitch and then scoring via a base hit by second baseman Billy Wurch.

After taking over for Lonsbury in the fifth, right-hander Zach Haigis would encounter trouble with two outs in the sixth, starting with a stolen base by center fielder Kyle Van Liere. An error by Vorhees on a high-bounding ground ball off the bat of Travis Holt would score Van Liere from second. Another error by Vorhees on the following play would extend the inning, allowing Aaron Steinhart to come to the plate and send a pitch over the left field fence of Friendship Field.

Hagis would then proceed to walk third baseman Ryan O’Halloran in the seventh, setting the stage for a game-tying two-run homer by Steinhart that would knot the game up once more. Those two runs would be the only earned ones Haigis would give up over the course of his outing.

However, the Norse offense would find paydirt once again. Following the seventh inning stretch and Greg Gilbert coming on to pitch for the Bulldogs, Noah Fisher found a hole in the middle of the infield for a base hit, advancing to second on a wild pitch and moving to third on a sacrifice bunt by Odom. Fisher then scored while Hall grounded into a 6-4-3 double play.

After Gilbert gave up a walk to Kain, Alex Voss replaced him on the mound, with Kain promptly advancing to second on a wild pitch during an at-bat that saw Tucker walk. Moss then hit a double into right center that would bring both men home, followed by a Vorhees single that allowed Moss to score. Both offenses would be quieted before Andrew Mulhern came on to close out the game for the Norse.

The Norse conclude their brief homestand on Wednesday with a bout against the Xavier Musketeers at 2 p.m. at Friendship Field.